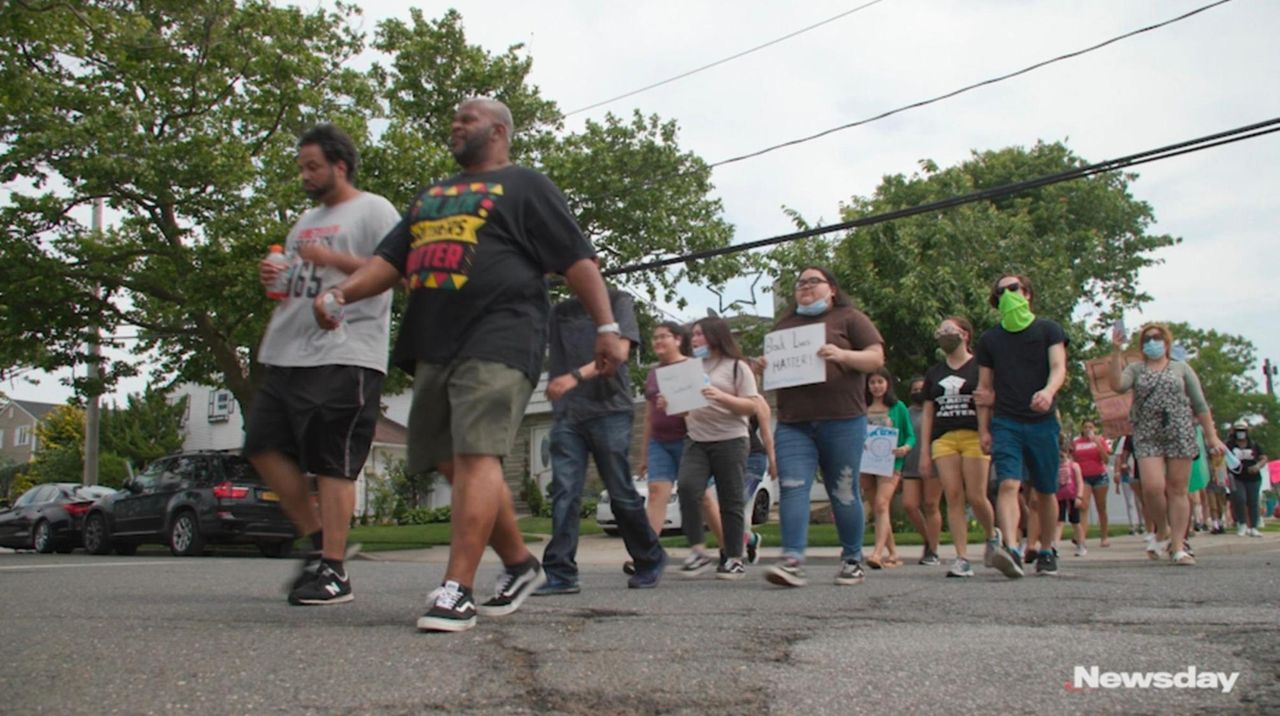 Long Islanders Saturday celebrated Juneteenth two days after it became a federal holiday, commemorating the day when slavery ended in the United States and emphasizing how much still needs to be done to achieve true racial equality.

About 100 people braved the heat in Hempstead, where local officials honored Nassau County’s first African American district attorney, Joyce A. Smith, who was sworn in this month as acting district attorney after Madeline Singas was appointed a New York Court of Appeals judge.

Smith said she is not running to replace Singas in November, but said she hopes more African Americans can thrive in top roles.

"It’s a landmark achievement and long overdue," Smith said. "I’m not going to be the last."

In her keynote speech, Smith said she has traced her ancestors to slavery before they were counted as people.

"We’re free. I’m here to tell young people and seniors you’re free. We proclaim once again that those who would have left us kept in bondage or left to die didn’t succeed. We survived," she said.

She told today’s generations that their legacy is not what they post online, or their possessions, but the ancestors who came before them.

"We have to honor the legacy of who we really are," Smith said. "When we begin to recognize our truth, that should be self-evident, then we can truly celebrate our emancipation together."

Nassau County Executive Laura Curran said at the event that "we know there’s more work to be done. It’s always a work in progress; we’re never done. To have the chief law enforcement official in Nassau County and the first Black person in this position is a big deal. We’re always seeking to build trust and improve relations between law enforcement and the community, and this is real action toward that."

Juneteenth celebrates the arrival of Union troops in Galveston, Texas, on June 19, 1865, two months after the end of the Civil War, to announce to slaves that they were free.

The day has turned into both a celebration of the end of slavery and a call for racial and social justice.

In Freeport, about 75 people marched more than a mile down Main Street to and from Cow Meadow Park, chanting "Black lives matter" and "say his name, George Floyd," referring to the Black man murdered by a Minneapolis police officer.

Kiara McCarson, 16, of Roosevelt, said she only learned about Juneteenth last year, when commemorations were more visible because Floyd's murder was only weeks before. It’s never been taught in her schools, she said.

Cecil Shackelton, 50, incorporates a discussion of Juneteenth in his classes at a Brooklyn high school. He said he hoped the new federal holiday would lead more schools to teach about Juneteenth and spur discussions to "give some deeper insight into why we march."

Shanequa Levin, founder and CEO of the Women’s Diversity Network, said the holiday designation "just recognizes that Black people have a different independence day, and it means more to us than July Fourth, because this day represents all Black people becoming free. Independence Day didn’t make us free."

Skyler Johnson, 20, of Mount Sinai, an administrator for Suffolk Progressives and a candidate for the state Assembly, said the federal holiday designation is "great. But they do that instead of passing substantial legislation to better the lives of people throughout the United States. There is so much that President Biden can do. … There is so much that Congress can do. But it’s not getting done."

In Southampton, the first federally recognized Juneteenth holiday coincided with the opening of the Southampton African American Museum.

Brenda Simmons, the museum’s director, said it took 16 years to get the museum up and running, and Saturday's opening "made all the struggles, all the delays, all the sleepless nights worth it."

Once a barbershop and beauty parlor on North Sea Road built by Emanual Seymore in the 1940s, the building was a gathering place for local African Americans. It has been converted into a rotating art and photo gallery, research center and community facility.

Danielle Smith, of San Antonio, Texas, arrived at the ceremony with several family members from New York, Texas, Arkansas and Maryland. An emotional Smith, who is African American, said when she found out how long it took Simmons to set up the museum, she was inspired to come.

"I don’t know if I could have held out for 16 years trying to get this done, and it seemed like an impossible feat," Smith said. "The depictions of the Hamptons you see on TV, you don’t see many people who look like us. For us to come here and see people that look like us is a new reality check. And for there to be an African American museum that talks about the lives of people who look like us and what they’ve done is just phenomenal."

Visitors were offered tours of the museum, which featured exhibits on barbershop tools used in the 1940s, the history of Black barber and beauty shops as centers of community, and murals.

Mark Chambers, who teaches Africana studies at Stony Brook University, was one of three panelists who spoke during a panel history of Black barbershops and beauty parlors. He grew emotional when he thought about the museum’s opening coinciding with the state's reopening and Juneteenth becoming a national holiday.

"When I think of everything that happened this week … and we were all together here last night at this gathering place, it just seems to be ordained for this moment," Chambers said.

Other festivities on LI

"Our vision was to create an event with the idea of Juneteenth as a celebration, not be stuffy or formal, but a real celebration and dancing," organizer Tamar Paoli-Bailey said. "I think oftentimes it’s about a struggle and we’re protesting and struggling, but Juneteenth is a day where they didn’t realize they were free. In a year we had COVID-19 and police brutality and all the crazy things in society, we need a day to celebrate Black joy."

Other events that were scheduled Saturday included a street festival in Wyandanch, and what was described as first-ever Juneteenth celebrations in Central Islip and in Cherry Grove on Fire Island.

In October, Gov. Andrew M. Cuomo signed legislation making Juneteenth an official state holiday. On Saturday, he announced that landmarks across the state would be lit red, black and green Saturday night in celebration of the holiday.