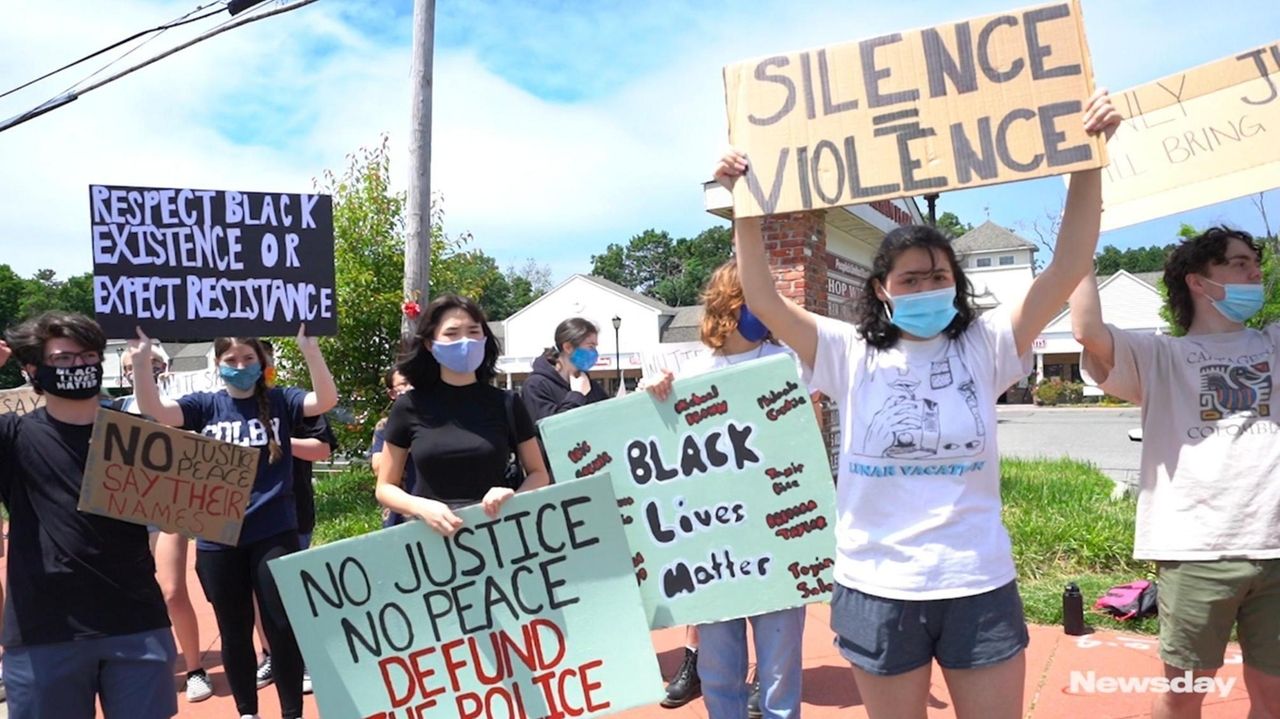 Long Islanders spoke to Newsday about the Black Lives Matter protests taking place across the Island and the significance of this year's Juneteenth, the date when black residents of Galveston, Texas, heard the Civil War and slavery had both ended.  Credit: Newsday / Shelby Knowles; Randee Daddona

The date, June 19, 1865, when black residents of Galveston, Texas, heard the Civil War and slavery had both ended, has gained greater meaning during a turbulent season of protests over George Floyd's killing.

Activists on Long Island say what is now known as Juneteenth is a fitting point of reference for activists who serve a role like that of 19th century abolitionists — white and black — who fought to eliminate violence and social death perpetrated on black people through slavery.

They say it also mirrors the civil rights movement led by the Rev. Martin Luther King, Jr. in the 1960s.

“It seems like history is repeating itself,” said Olivia Acuna, 20, of Shoreham, a first-time activist who organized a Wednesday protest with her friend, Carley Nicoletti, that drew 100 people.

Added the Rev. Arthur L. Mackey, senior pastor of Mount Sinai Baptist Church Cathedral in Roosevelt, and a veteran activist who participated in marches this week: “It definitely dovetails, these marches and protests, in bringing together the civil rights struggle of that date.”

The celebration arises from the fact that enslaved people in Texas were not told they were “free” for more than two years after the Emancipation Proclamation went into effect on Jan. 1, 1863.

The death of Floyd on May 25, less than a month before the Juneteenth celebration, has spurred many to call for June 19 to be designated a national holiday.

Floyd, 46, a black resident of Minneapolis, died after four police officers there subdued him on the ground. One white officer, Derek Chauvin, knelt on Floyd’s neck for nearly nine minutes until he died. Before Floyd lost consciousness, he told the officers he was in pain and said “I can’t breathe” while crying out for his deceased mother.

The killing — captured on cellphone video before going viral — engendered unprecedented outrage over the death of an unarmed and handcuffed black citizen while renewing calls for an end to police brutality. Some of the protests devolved into violent clashes with Minneapolis police, massive property damage and widespread looting.

Several people were killed, and many more injured.

The demonstrations in the streets of Minneapolis quickly spread to New York, Paris, London and dozens of Long Island communities with a broadened demand to include an end to systemic racism in policing and society at large.

Lynda Day, a professor of Africana Studies at Brooklyn College and an expert on the history of blacks on Long Island, said the mass appeal of what appears to be a burgeoning movement for change is similar to the abolition era but more closely resembles the civil rights movement of the 1960s because it has attracted multicultural foot soldiers.

She said the abolitionists — Frederick Douglass, William Lloyd Garrison, Harriet Beecher Stowe, Sojourner Truth and many others — were a relatively “elite” group of whites and blacks who advocated for enslaved people with little agency.

“I think as a black woman who has been in this world for long time that this is amazing to me,” Day said of the current protests and appeals for change that have led to legislation reforming policing, the toppling of monuments and the retiring of the Confederate Flag from places of prominence. The demonstrations have also spurred corporations and universities to declare Juneteenth a holiday less than a month after Floyd’s death.

“I am suggesting that this is so much modern and grassroots, especially because youth are involved in it,” Day said, adding that she has seen people of all races, ages, sexual orientations and genders at the protests. “I do think this is definitely better, way wider and more impactful.”

Ray Settles, of Roosevelt, also known as "Red Ink," and among the organizers of Saturday protests through Roosevelt and Baldwin that attracted a crowd of 1,000, agreed that the current mood is similar to the fight for racial justice sparked by King.

“I think, basically, this is the biggest movement since civil rights,” Settles said. “People are actually standing together and fighting. I’m definitely amazed that we are even doing

Brookhaven town Councilwoman Valerie M. Cartright spoke at a protest in Coram last week because, she said, “systemic racism is alive and well.” She said the current climate parallels the birth of Juneteenth.

“So many slaves across the country learned of their freedom several months and years after it was official,” she said. “In many ways there are clear parallels to today. The slaves in Texas were free and had been free under the law for several years, but they were still treated as slaves and were not provided their equal rights guaranteed by the Constitution of the United States. Today, although slavery has clearly been abolished many black people still face different treatment although the law says we are equal.”

She said the protests give her a “glimmer of hope.”

The message of the demonstrations touched Acuna, an Ithaca College student who said she wanted to give her own community an opportunity to speak out against racism.

“I am not black, I am Hispanic so I don’t know how much I can speak about the black experience,” she said. “But I know lot of black people see June 19th as Independence Day, because on the day the country celebrates, July 4, they were not independent then. … Juneteenth “is really a significant part of American history.”

Rachel Hu, 27, of Mineola, who helped organize a protest on Friday in Freeport with Tiffany Cooke, places Juneteenth in the same realm as V-E Day, when the allied forces of World War II accepted Germany’s surrender on May 8, 1945.

“Juneteenth is a celebration of emancipation but it’s celebration of the long legacy of resistance and power of the black community,” she said “Juneteenth this year is starting to become a national holiday. But why has Juneteenth never been a national holiday? … We celebrate victory in the war against fascism and yet we don’t celebrate Juneteenth, which is the emancipation from the worst oppressions in human history.”

The noon event at Freeport Northeast Park is designed to seek justice for Breonna Taylor, 26, a black woman who was shot to death March 13 in her Louisville, Kentucky home by police officers executing a no-knock warrant — as well as many other victims of police brutality, she said.

Tamika Cox-Mingo, 43, of Roosevelt, 43, who organized the protest with Settles, said Juneteenth was hardly acknowledged on Long Island before Floyd’s death. And she said that date may itself be overshadowed by a date in the future.

“What we’re fighting for right now is our true freedom,” she said. “We may end up having a different date besides Juneteenth … Our real freedom will come when the laws start to change to work for us. Another day should be given to us after we see the change and realize the system is actually working for us."