Juneteenth was observed across Long Island on Friday. Newsday's Cecilia Dowd shows us how residents and officials marked the day. Credit: Howard Schnapp

Demonstrations on Long Island Friday took on a dual purpose: condemning police brutality and racism while celebrating Juneteenth, the observance commemorating the end of slavery, when black people in Texas learned of emancipation on June 19, 1865.

Protests in Freeport, East Meadow, Shirley, Amityville, Mineola and Hicksville continued to cast a spotlight on the treatment of black people in the country almost four weeks after the May 25 killing of George Floyd, the black Minneapolis man who died after a police officer knelt on his neck for nearly nine minutes.

The protests occurred as municipalities, companies and institutions declared Juneteenth a holiday.

“We are at a pivotal moment in time, working with all organizations of this civil rights movement,” said Hempstead Public Schools Board of Trustees Vice President Carmen Ayala at a news conference. “This is not a federal holiday where we shut down and observe this day and the liberation and the emancipation. We want to make sure this is done federally to commemorate this moment of African American history.” 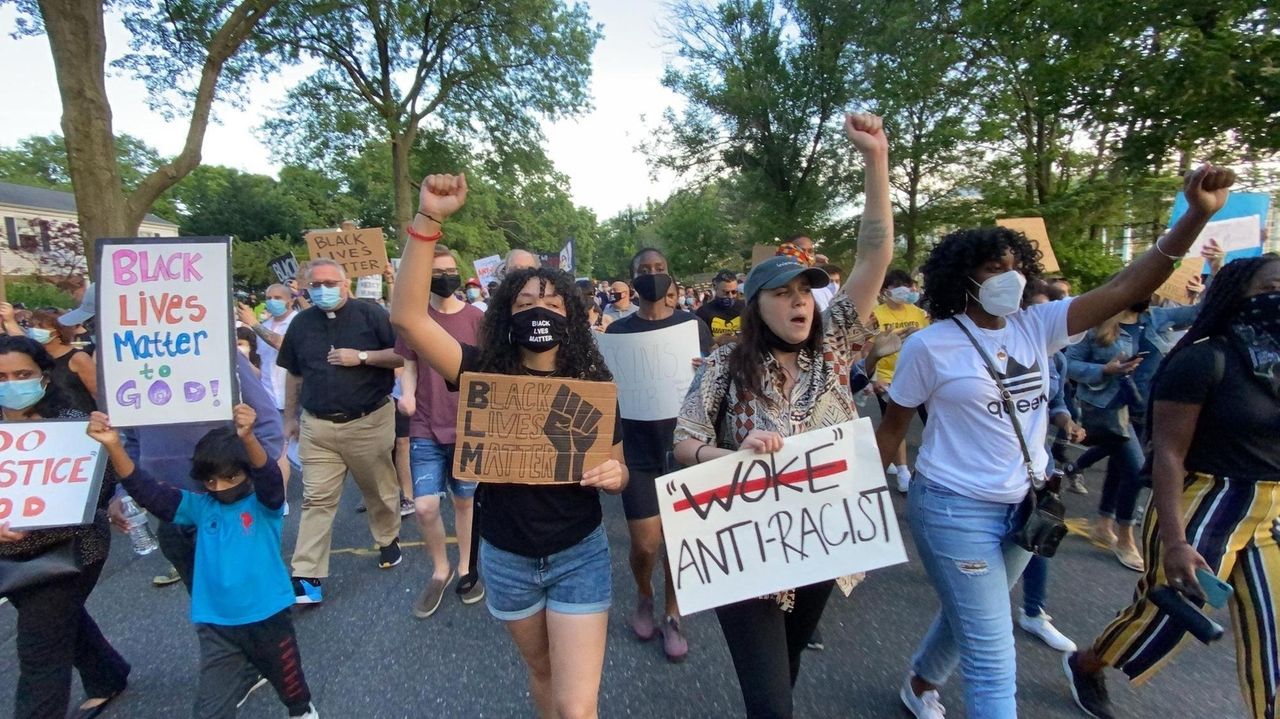 Their pleas came as New York City Mayor Bill de Blasio said Juneteenth will be an official holiday for the city next year. Gov. Andrew M. Cuomo on Wednesday issued an executive order recognizing Juneteenth as a holiday for state employees and vowed to back legislation making it an official state holiday.

Juneteenth commemorates June 19, 1865, when black residents of Galveston, Texas, were freed by Union troops who had just won the Civil War enforcing President Abraham Lincoln's Emancipation Proclamation, which had been in effect since Jan. 1, 1863.

The Memorial Day death of Floyd in Minneapolis police custody — which activists call a display of raw state-sponsored violence against black people dating back to the days of slavery — has sparked weeks of protests and spurred calls for June 19 to be designated a national holiday. 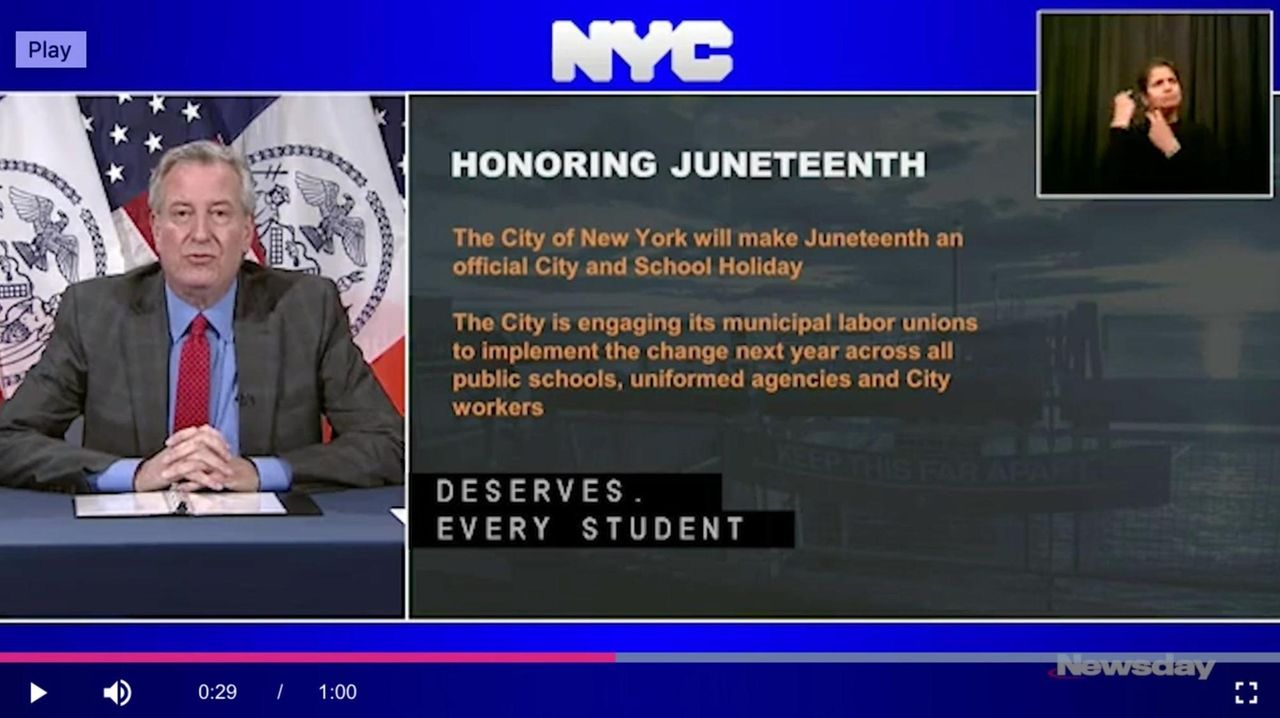 There were demonstrations around the nation Friday. Protesters marched over the Brooklyn Bridge, prayed in Atlanta and paused for a moment of silence at the Martin Luther King Jr. Memorial in Washington.

On Long Island, about 50 protesters marched from Eisenhower Park in East Meadow to downtown Hempstead, carrying signs like “Black Lives are Precious” and “Make Juneteenth a National Holiday.”

They chanted “No justice, no peace, no racist police,” while Nassau police diverted traffic as they marched on the sidewalk.

Organizer Pedro Cabrera, 21, of Queens said: "These protests are not a black and white issue. It’s a humanitarian issue. People are dying. Some people do not regard human life the same because of color, religion, sex, or whatever it is; it doesn’t matter. We are all human and we all deserve to live and to be safe, loved and protected.”

"This country is moving backwards and these protests are necessary, mandatory,” Mackey said.

“We have to deal with the racism that’s in our own backyard,” he said.

Bradley Zacarias, 40, of Freeport, brought his 5-year-old daughter, Alexa, to march in Freeport because he wanted her “to understand that what they’re doing today is positive for everyone, not just one group” and to learn about “standing up for justice, for the rights which we all have.”

In Shirley, amid peaceful chanting of "Black Lives Matter" and "Juneteenth" and music, demonstrators and celebrants said weeks of protests have awoken the community and the nation to grievances and injustices suffered in the black community, and that it’s time to put that activism into action.

The day “holds a lot of symbolism,” said Ezekiel Torres of Shirley, who has organized and attended more than a dozen rallies at the corner of William Floyd Parkway and Montauk Highway. “I want to create a better world for these kids.”

“It’s here just like it’s everywhere,” said Adrienne Jerry of Mastic, who attended with her young grandsons. “I want my race to stand up against all this systemic racism. It’s ignorant.”

Sunshine Deboard of Coram, a member of the nonprofit Just Us Making Progress, or JUMP, said the black community has “been through a lot. We’ve lost a lot of lives.”

But it has also made strides, and “today is a celebration of all we’ve accomplished,” she said.

Nakia Sparkmon, 27, of Mastic, who co-founded a group called The Empowered Black Society, said it’s also about educating and motivating the African American community locally. “I want change for the community,” she said. “I want to see changes at the Suffolk County Police Department. I want to see black people wake up.”

About 200 protesters gathered near the Hicksville LIRR Station in a demonstration organized by the Student Government Association of SUNY Old Westbury.

Student government president Kalief Metellus, 24, told a crowd gathered in a parking lot across from the LIRR station that the demonstration also served to register voters, fight against systemic racism and unite all humans, regardless of cultural background.

Metellus said the protesters planned on marching to the SUNY Old Westbury campus, about a 4-mile trek.

Black Lives Matters T-shirts were given out to participants.

Dorian Drummond, 26, of Brentwood, a 2015 graduate of SUNY Old Westbury, said he was protesting Friday because “people are saying racism is getting worse. It’s not getting worse — it’s just filmed now.”

“So when we celebrate Juneteenth next year we will do so knowing that every employee who serves the people of this county will have received this training,” Bellone said.