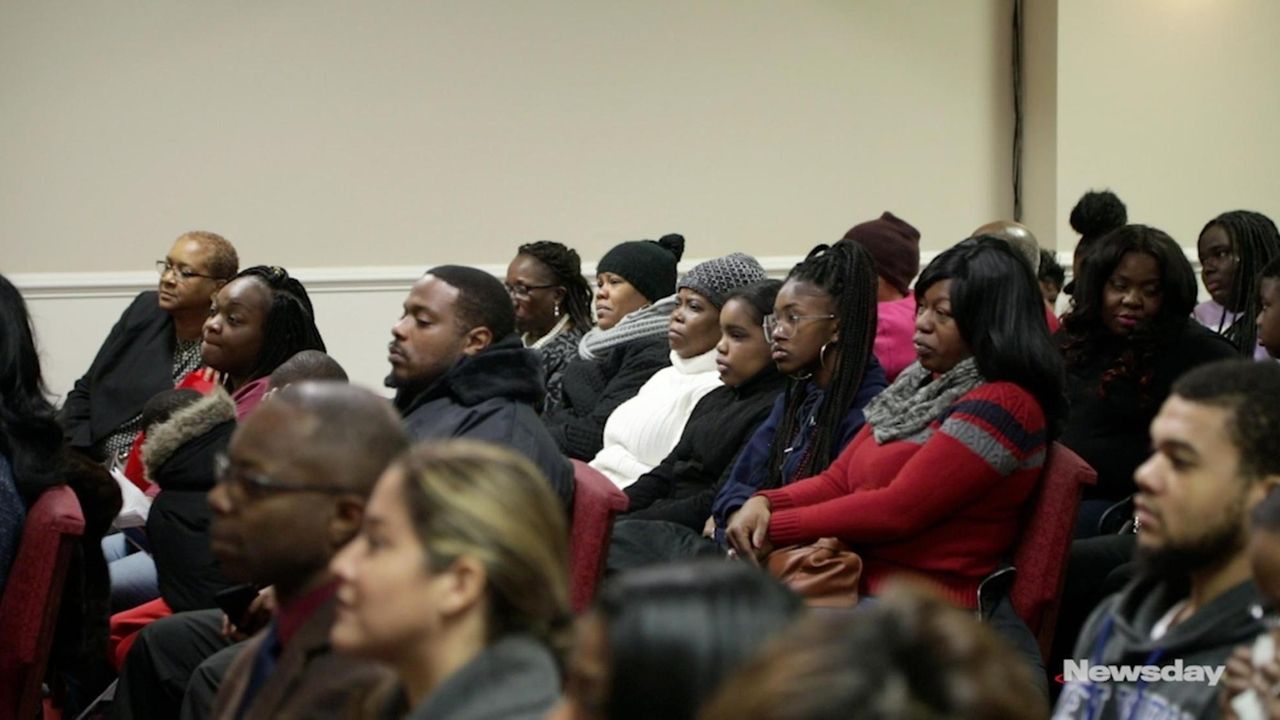 Hundreds across Long Island turned out Monday for Martin Luther King Jr. Day events, with many declaring that the slain civil rights leader’s words and beliefs ring stronger than ever today.

“In 2019 . . . the hate rhetoric is at an all-time high,” Councilwoman Anissa Moore told about 50 people at Long Beach City Hall. “If we want to see the change, we have to be the change.”

Pastor Eric Mull of St. John’s Lutheran Church by the Sea told the crowd that King is “an international hero. How did he endure the onslaught of racial hatred?” He noted that King was jailed more than two dozen times, received numerous death threats, had his house firebombed, and was stabbed in the chest with a steel letter opener 10 years before he was assassinated in Memphis, Tennessee, in 1968.

Afterward, the crowd gathered in the lobby and marched out into the bitter cold about a mile to the Long Beach Martin Luther King Jr. Center. They followed part of the path King himself took when he led a civil rights march in the city in 1965.

“The words of Martin Luther King Jr. have given us so much to aspire to,” Helen Dorado Alessi of the Latino Civic Association told the crowd. “He was unafraid, and we should be, too.”

Ruth Albright, a Long Beach resident and teacher’s aide, said in an interview that she had visited the motel where King was slain. It is now a museum, and the room where he stayed was kept intact, complete with the coffee cup he was using that morning.

Albright said she cried when she visited the museum, and when she went to vote for the first time in 2008 — the year Barack Obama was elected president.

“His dream — some of it is coming true,” she said. “In different states, things are happening that we thought would never happen.”

Moore, who in 2015 became the first African-American elected to the Long Beach City Council, said she herself likely never would have landed that post, or become a professor at Nassau Community College, had it not been for King “breaking down those barriers.”

Still, many said they worry about what they view as an atmosphere of racial animosity permeating the country.

“I think his message really can resonate with us today at a time of growing hatred, that we really do need to search our community for love and understanding and that’s how we better our society including our city,” said Chumi Diamond, vice president of the Long Beach City Council.

In Garden City, the Long Island Children’s Museum hosted two programs celebrating King’s legacy. Festivities included art-making activities and musical performances in which freedom and protest songs — such as “We Shall Overcome” and “Marchin’ Down to Selma” — were sung.

Wyatt Ostrow, 8, his sister, and their parents were among nearly 100 people who turned out to watch Robbi K & Friends, an ensemble of four musicians, perform. At one point, children and adults, holding signs — “Equal Rights” and “Truth Peace Love” — marched on stage and around the auditorium.

All children, regardless of the color of their skin, should be allowed to attend the schools of their choice and eat in the restaurants they want, said Wyatt, a second-grader from Wantagh Elementary School. Wyatt’s dream is freedom for all. “Freedom to do whatever you want,” he said.

Wyatt’s mother, Glenda Alvarado-Ostrow, 41, a speech therapist from Wantagh, said she was glad that museum organizers offered programs celebrating the civil rights leader to the children.

“It teaches them that much has been overcome, yet it also teaches them to keep fighting for those who do not have equal rights,” said Alvarado-Ostrow.

In the collage-making program, Sara Vernet, museum programs coordinator, discussed fun facts about King that some people may not know.

“Yep, he was so smart he skipped two grades,” said Vernet. “He skipped 9th and 12th grades.”

Holding up black-and-white photos of public restrooms, swimming pools and theaters, with signs that said “whites only,” Vernet told the children that years ago black kids and adults were not allowed to use the same public facilities reserved for white folks.

Vernet asked the children how they would feel if their teachers today separated them based on the color of their skin.

Children who live in a society that is free from segregation are only just learning about the struggles that came before, said Carmine Goncalves, father of Daniel and Diana.

“You want them to have an appreciation for what Dr. King did and what it meant,” said Goncalves.

MLK Jr.'s visit to LI, more classic Newsday photosNewsday has been photographing life on Long Island since the publication launched in 1940. We've archived thousands of photos, stretching back to the 1920s. Here are some of our favorites.