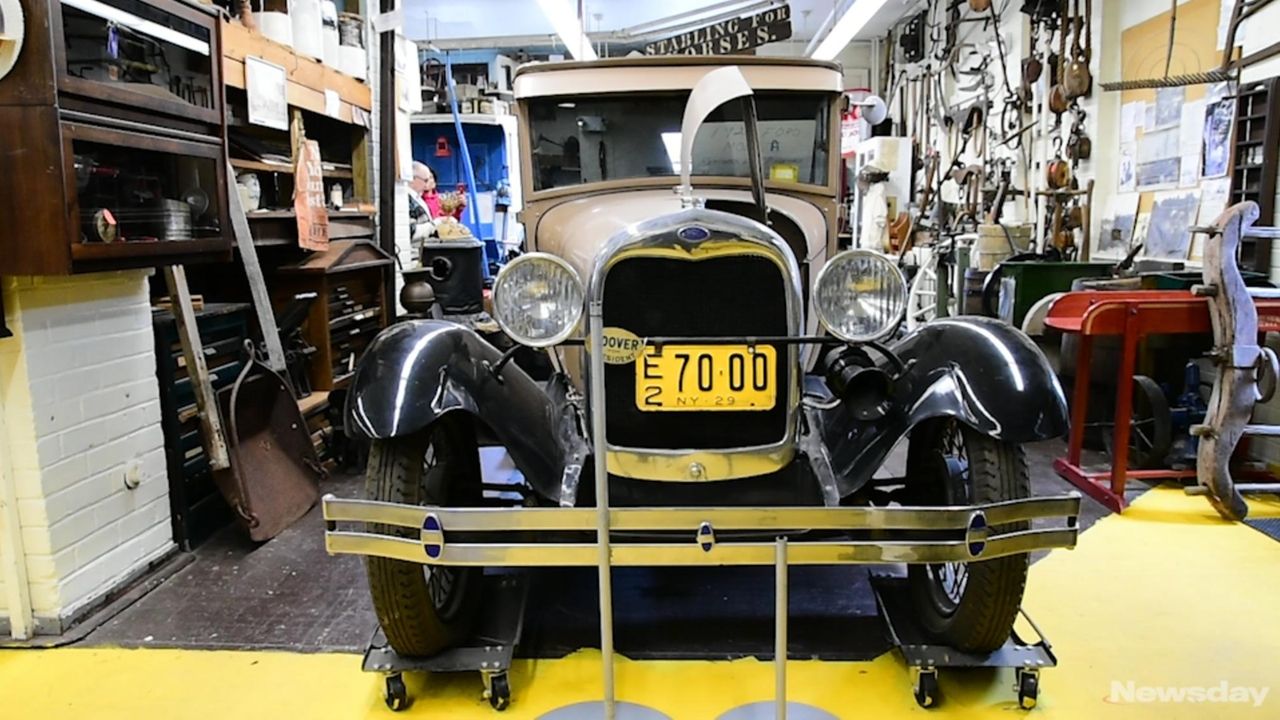 Leo Ostebo founded the King's Park Heritage Museum a quarter-centruy ago. The museum is located in Kings Park High School, and began as a display that now fills 11 former classrooms with more than 4,000 artifacts. Credit: Newsday / Thomas A. Ferrara

Leo Ostebo is a Long Island “picker” with a historic purpose: collecting artifacts for the Kings Park Heritage Museum, which he founded in his hometown a quarter-century ago.

Ostebo, 86, the museum’s curator and volunteer director, was perusing through the contents in the garage of a local resident for potential museum treasures when the homeowner mentioned one of Kings Park’s forgotten institutions: the long-shuttered World War I-era Howard Orphanage and Industrial School, run by and for African-Americans.

“He talked about how people forget things, and that they can’t even remember that we had a black orphanage,” Ostebo recalls. It was news to Ostebo, who has lived in Kings Park since 1961 and taught English at Kings Park High School from 1958 until his retirement in 1990. “My head came up and almost fell off my shoulders,” Ostebo says. Neither he nor anyone else he later asked around town had heard of the orphanage.

Proof of its existence turned up on another research trip, this time in the Hamptons. A woman who was donating items to the museum asked whether Ostebo was interested in a vintage pamphlet describing the school, which Ostebo says opened in 1911 on a Kings Park farm. The orphanage closed permanently after its water pipes froze in the bitter winter of 1918.

As a result of serendipity and Ostebo’s dogged research, a photo of the orphanage is on display in the hallway of the heritage museum, which is in a wing of the Kings Park Central School District’s Ralph J. Osgood Intermediate School on Old Dock Road.

“This is the town that will help you get it done,” says Ostebo, of his vision for the museum and who sees it as a tribute to the North Shore community that cropped up around the Kings Park Psychiatric Center. The facility closed in 1996.

Preserving and exhibiting Kings Park’s historic and sundry artifacts with the help of his friends, neighbors and students has been a 25-year retirement project for Ostebo, who is as dedicated as Indiana Jones to collecting and cataloging anything that belongs in the local museum. It began as a school casement display, and now fills 11 former classrooms with more than 4,000 artifacts, including a Suffolk County Police Department squad car, and one of the earliest electric pianos, which Ostebo says was donated by the Kings Park resident who invented and patented it. The museum has become a place for kids to learn local history, for seniors to reminisce about times gone by and for donors who are looking for a lasting home for cherished collectibles.

Although the project is not quite finished — Ostebo hopes to spread out to 14 rooms someday — the museum won a prestigious accolade in April. The New York Association for Supervision and Curriculum Development, an organization of school superintendents and other educators, recognized it for “outstanding contributions to the local social studies curriculum through the cultivation, documentation and dissemination of the history of Kings Park and the surrounding community.”

The award is “really a tribute to his leadership,” says Timothy T. Eagen, the district schools superintendent and the association’s New York State chapter president. The association’s executive board of 10 current and retired New York educators reviewed the museum’s nomination for the award. Eagen says, “The executive board was unanimous in their selection of the museum for this recognition.”

Having a local history museum in a school building benefits the district’s children. Eagen says, “The kids have to walk by and through the museum, so it’s hard not to learn a little bit about your heritage just walking around the building.” The school has about 470 students in grades 4 and 5; other Kings Park classes visit the museum, as well as children from other school districts, such as Northport-East Northport.

Adults also benefit. Local history museums such as Kings Park’s are “the memory of the community,” says Cherie Cook, senior program manager of the American Association for State and Local History, in Nashville, Tennessee, a national organization with 5,800 members including community-based museums.

“The museum can be the place where the community can explore its past and connect it to what’s going on today,” Cook says. “It’s an educational tool for the kids and something that is a gift from him to the school system that hopefully will last for many years.”

Many district students have volunteered over the years to transport and set up exhibits, including Kings Park High School seniors Stephen Pravato, 18, and Carson Vulpis, 17. Pravato helped set up a cookie jar display and fill the tires in the vintage cars on exhibit, which include a 1929 Ford Model A. “I like the cars because you don’t see them on the road every day,” Pravato says.

The heritage museum exhibits are “a very eclectic mix of different items from different periods,” says Vulpis. He’s been visiting the cluttered aisles of vintage collections since age 7. “I remember learning about the Native Americans in fifth grade, and then we’d go to the museum and see the artifacts,” he says.

Vulpis credits Ostebo with getting him involved in the museum project. “I’ve known him for over 10 years,” he says. “He’s been a good friend to the family and I always remember him being extremely funny. He just tells it like it is.”

Ostebo was born and raised in Brooklyn. He graduated from Brooklyn Technical High School, and served with the U.S. Army in 1951 in South Korea during the Korean War. After the war he attended New England College in Henniker, New Hampshire, earning a bachelor’s degree in liberal arts. That’s where he met his future wife, Charlotte, a New Hampshire native.

At the suggestion of a cousin, who noted that Ostebo loved to read and talk, Ostebo decided to teach. He spent his entire career at Kings Park High School. Ostebo taught 11th- and 12th-graders about Shakespeare and created a course in the humanities. While holding down his teaching job, in the early 1960s he earned a master of arts in education from Hofstra University. He founded the high school’s junior varsity lacrosse program, and coached the rough-and-tumble sport for 33 years. The district honored Ostebo in 1994 with a plaque in its athletic hall of fame.

Ostebo also served as the high school’s college and career ombudsman. He regularly drove carloads of his students to admissions interviews. Dozens of students he advised were accepted at U.S. military academies including West Point, the U.S. Coast Guard Academy in New London, Connecticut, and the U. S. Naval Academy in Annapolis, Maryland. Ostebo has a collection of 70 souvenir coffee mugs, sent to him by former students from the colleges they attended.

In 1992, four of the lacrosse players he’d coached walked into his school office lamenting the impending closure of the psychiatric center. The teens told Ostebo, “We’re going to be nothing, we’re going to be a commuter community, we have nothing we can really talk about,’ ” he recalls.

Ostebo, reluctantly he says, agreed to help them make their case to the school board to establish a hometown museum.

“I said, ‘Hey, I’ve got enough on my plate, I’ll go with you, but I ain’t talking,’ ” Ostebo recalls. The school board was supportive. It approved the project, and appointed Ostebo as its mentor.

“They gave us a showcase,” Ostebo says of the school board. “It’s this wide [holding out his arms] and about seven feet tall, and they go, ‘That’s the museum . . . I said, ‘How can you make that a museum?’ ”

Almost 25 years later, Ostebo stands in the museum’s largest room, which houses an exhibitioncalled the “Kings Park General Store — Established 1931.” The room features diverse relics, from shelves of vintage bottles to “a typical farm wagon”. Ostebo provides details: The wagon, he says, was driven by a “Mr. Shapiro who used to come through town” from the farming area.

Charlotte Ostebo, 81, a former Kings Park elementary school substitute teacher, supports the museum project and her husband’s involvement. “It keeps him busy, and it’s a wonderful thing for the town,” she says. She and her husband celebrated their 60th anniversary last month. They have two children: a daughter, Theresa Verville, of Deering, New Hampshire, and a son, Thomas, a retired U.S. Coast Guard rear admiral, who lives in Norwalk, Connecticut, and three granddaughters.

Leo Ostebo, who also serves as a tour guide, says, “Anything anyone can see in this place was given by someone for nothing . . . We go from cars down to minor little fishing things and anything else in between. . . . This is the effort of a community that has pride — honest to goodness — in their location.”

The Kings Park Heritage Museum at the Ralph J. Osgood Intermediate School is open to the public.