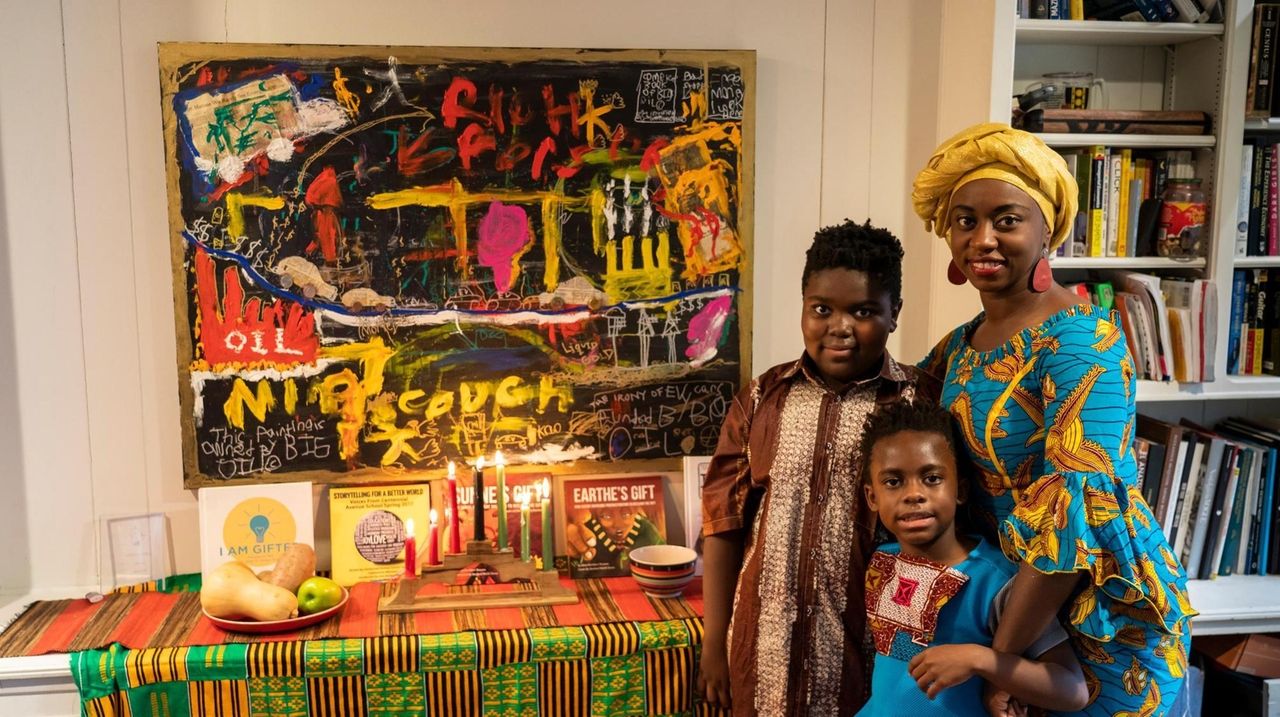 Ama Karikari-Yawson of Freeport says the seven principles that Kwanzaa observants celebrate this year "take on a different meaning, given the fact that it's been such an eventful year, when it comes to what it means to unify for causes like Black Lives Matter, and the end of police brutality," as well as other reasons. The weeklong holiday that honors African heritage began Saturday. Credit: Corey Sipkin

For the first time in her life, Tamar Paoli-Bailey will celebrate Kwanzaa with her husband, William, a holiday she observed mostly alone since she was a child.

"As a kid, when you are Black, you don’t see many examples of yourself," said Paoli-Bailey, of Elmont. "So anything that had to do with Black people, I was always drawn to as a child."

The arrival of Kwanzaa on Saturday — the first day of a weeklong holiday that honors African heritage — comes at the end of a turbulent year marked by monthslong racial justice protests following the death of George Floyd and a global pandemic that has disproportionally affected the Black community.

Tracey Edwards, Long Island director of the NAACP, said the holiday’s principles are more relevant than ever before.

"When you look at the collective responsibility, purpose and faith, that rings really different this year … as it relates to both the virus and for working together in order to eliminate the racial disparities," Edwards said.

Paoli-Bailey, a Haitian-American, attended about 10 protests this year and said 2020 felt like a parallel to the time in which Kwanzaa was born.

The secular holiday was created in 1966 by Maulana Karenga, a professor of Africana Studies at California State University Long Beach, amidst an era of racial unrest. The word Kwanzaa comes from a Swahili phrase meaning "first fruits."

"Today’s world mirrors what was going on 50 years ago when Kwanzaa was created," Paoli-Bailey said. "Now everyone has this wakeup call that we have more work to do as a people."

For the week from Dec. 26 to Jan. 1, Paoli-Bailey has planned tasks based on each one of the principles.

When the day for cooperative economics comes, she and her husband plan to make a list of Black-owned businesses and nonprofits to support. On the day of purpose, they will lay out a vision board with budgets and personal goals for 2021.

At night, the couple will light the candles on their new kinara. The candle holder has one black candle in the center with three red candles to the left and three green candles to the right. The black candle represents people, the red ones their struggle and the green candles symbolizing the future and hope that comes from their struggle, according to the Official Kwanzaa website.

For William Bailey, a community organizer who never celebrated Kwanzaa, the holiday is about reaffirming his roots.

"We can celebrate ourselves for who we are as a people and just have something that we can say it’s ours," said Bailey, 36.

In her Freeport home, Ama Karikari-Yawson has already spread a multicolored mat on a table with a kinara at its center, accompanied by assorted fruits and vegetables symbolizing the rewards of collective labor.

Karikari-Yawson, 40, will officiate a few virtual Kwanzaa events across Long Island next week and said she always takes time to reflect first. Although it has been a year marred by struggles and loss, the mother of two said 2020 has also been one of togetherness.

At the end of the year when people tend to be more reflective, observants said the Kwanzaa principles are a value system that should resonate in daily life too.

Phil Andrews, president of the Long Island African American Chamber of Commerce, said he’s taken the principles to heart since he first heard founder Karenga speak in Brooklyn when he was 18.

"It’s something we are supposed to incorporate in our lives," said Andrews, 57. "I try to not just do it during the holiday. I try to make this a part of my life every day."