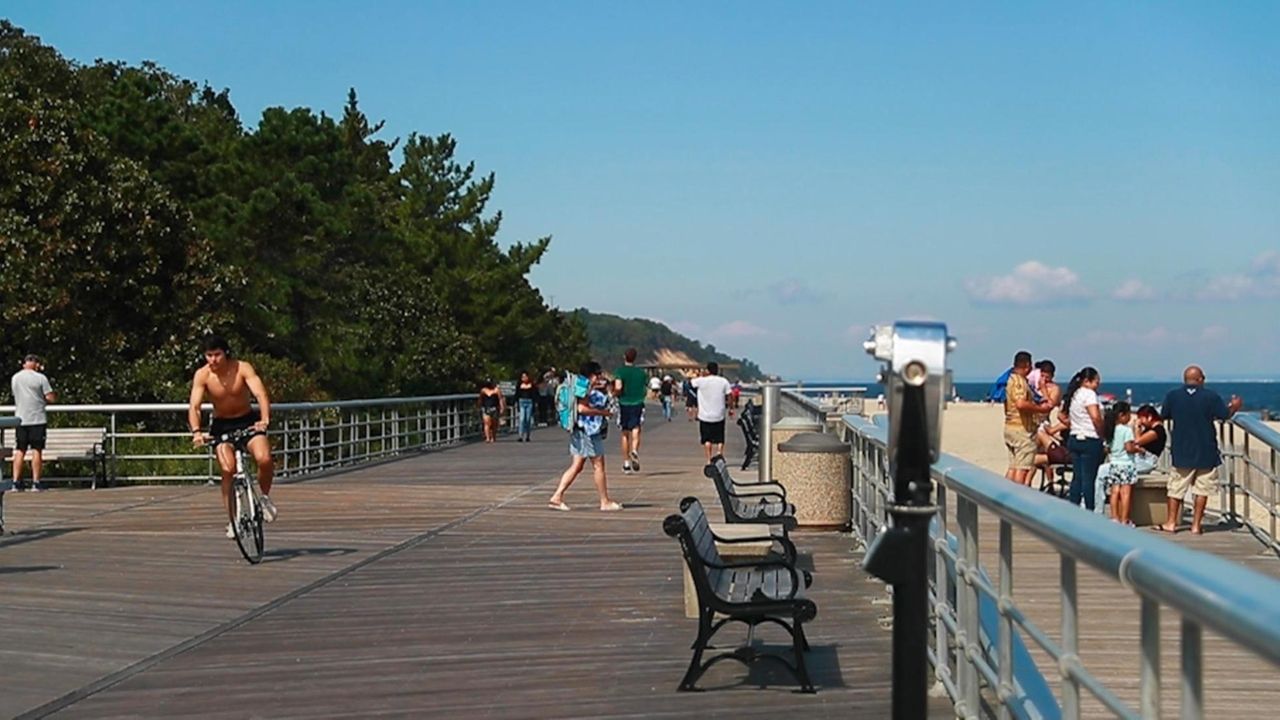 As Labor Day marks the unofficial end of summer, Long Islanders spoke about how some of their summer plans changed amid the rise of the delta variant.  Credit: Newsday / Raychel Brightman; Debbie Egan-Chin

As the crowds made their way to Long Island parks, pools and beaches on Labor Day Monday, some lamented the end of the summer that was — and the one that wasn't.

The season began with the growing hope of a return to normalcy but ended with families changing travel plans and readjusting their outlook due to concerns over the highly contagious delta variant of the coronavirus.

"When I got vaccinated initially, I said: ‘Well, I'm free,’" said Beja, who was taking a walk with his wife, Susan Hermer, on the boardwalk of Sunken Meadow State Park. "Now, not so free anymore."

That optimism evaporated over the summer as the delta variant drove a surge on the Island as well as elsewhere, accounting for nearly all new COVID-19 cases at some of the Island’s largest hospitals.

Gurvinder and Anu Bindra were among those who changed their vacation travels because of the variant.

The Medford couple had planned to visit Jamaica in August but didn’t feel safe to travel by air. So they chose to explore attractions closer to home — places they didn’t know despite having lived on the Island for more than two decades.

"Every summer, as kids are away from school, you go out of town, you travel," said Gurvinder Bindra, 47. After visiting local parks and heading to the East End this year, "we appreciate it more — the local businesses and local restaurants in many ways."

The Bindras said the family spent more time together during the pandemic, which has led to new perspectives.

"It gave us a full stop on our thought process to consider what is important in life," said Anu Bindra, 45, as she stood next to her husband on the Sunken Meadow boardwalk.

Also on the boardwalk was Maclin Guevara, 40, of Roosevelt. The father of two young daughters was heading back to the beach, carrying a folded beach umbrella across his shoulder and wearing a hat that belonged to his wife.

"Now we don't go to the restaurant like we want to," Guevara said of delta’s impact. "We want to stay away for a little bit."

Worries over the variant also changed Leslie Adkins’ plans to travel to the south and Mexico this summer. Instead, the Uniondale grandmother stayed local, had family cookouts and went to the beach, including a trip to Jones Beach on Monday with her granddaughter, Xiani Adkins, 2.

"Jones Beach has been an outlet," said Adkins, 50, a human resources specialist.

Christina Carelli of Queens didn’t have travel plans this summer except to spend time outside. On Monday, outside meant Jones Beach.

"Last summer was more depressing," said Carelli, 32, who works as a nanny. As vaccinations became more available, she said this summer has been "more freeing."

Despite fear over delta, many Long Islanders said they had a better summer compared with the last one and had gained renewed appreciation of things they took for granted in the past.

"We spent time in the backyard last year," said Jackie Watkis of Coram, as she sat next to her daughter and husband on a bench overlooking the Sunken Meadow beach. "Now we could come out, take walks, go to restaurants and visit our family."

"Everything's feeling back to normal more," said King, 19, of Wantagh.

For many, the unofficial end of the summer also signaled a new chapter in life, a transition felt more heavily during a pandemic.

Natalie Ortof, 21, would be heading back to Fordham University Monday night to start her senior year in college after finishing her shift as a Sunken Meadow lifeguard.

"I'm pretty sad, especially because this is like my last summer," said Ortof, of Bayside, Queens. "Next summer, I'm going to start working full time in Manhattan. It feels like my last fun summer. I’m sad to see it come to an end. But you know, real life is calling."

As more children get ready to return to school after Labor Day, Angie Galabay, 9, of Corona, Queens, felt the conflicting emotions of anxiety and excitement.

"I’m excited and nervous," the incoming fourth-grader said. "I haven’t been in school. … It’s like the first time you are going back to see the school and you don’t know anything about it anymore. Just kind of scary."

And the upcoming 20th anniversary of the Sept. 11 terror attacks weighed on the mind of Nancy Chu, 61, who walked along the Sunken Meadow beach to the sound of waves crashing ashore.

"People have lost so many people to COVID. People lost people in 9/11. It's just a time of great loss," said Chu, of East Northport. "I haven't been personally impacted by it, but I feel for all the people who have."