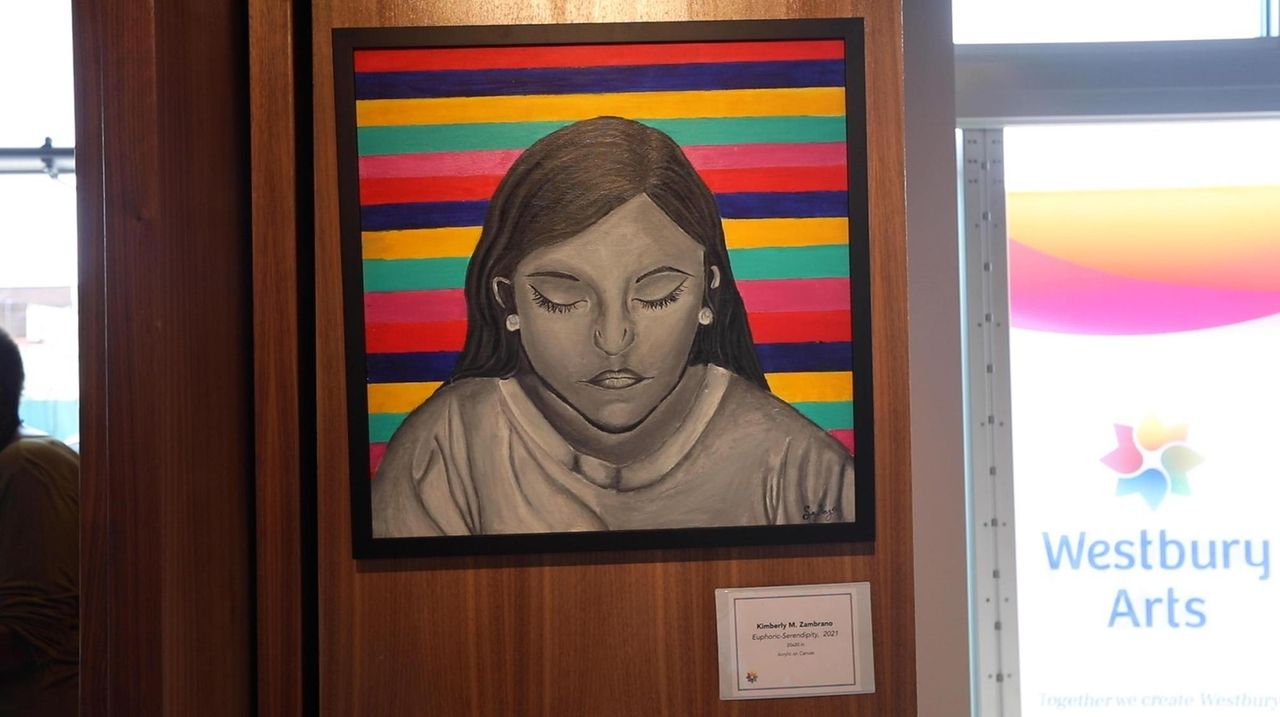 "We didn’t see us in the picture," said artist Jenri Balmori, 32, of those who shared his Latino heritage growing up on Long Island. "I always felt like we weren’t really represented or heard."

Now, with such initiatives as "Latinx Thriving," an exhibition at Westbury Arts’ new building — unveiled in June — showcasing artwork by the surrounding Hispanic community, the view of local talent is decidedly more expansive.

"I wouldn’t ever have imagined that someone would be reaching out and asking me to be a part of a show specifically for people like me in a place where growth needed to happen," said Balmori, a first-generation Salvadoran American.

His contribution, "Capricorn Moon," a surrealistic image rendered in acrylic and colored pencil and featuring a crescent moon of white papier-mâche roses, also reflects his own evolution. "It’s about the death and rebirth of myself to my higher self," he explained. "I have transcended into the person I’ve wanted to become on a spiritual level for a long time. The theme of the show is Latinx thriving, so what better painting then this one for the show?"

Westbury Arts’ first exhibition spotlighting Latinx artists was mounted in 2019 as a component of the center’s Hispanic Heritage Month programming, part of its larger series "Out of Many One" dedicated to various underrepresented populations.

"Our last exhibit was titled ‘Estamos Unidos,’ which translates to ‘We Are United,’ and was chosen to emphasize unity in our community as we were faced with negativity and our work ethic was questioned," noted founding member Alex Nuñez, who is also on the center’s board of directors and, along with Adriana Devers, assembled the artworks on display.

According to Nuñez, a longtime Westbury resident born in the Dominican Republic, the current show, featuring the works of nine artists, attests to how the community as a whole has benefited from Latino involvement.

New census data reveals an increasingly diverse population on Long Island, with the largest growth surge among Hispanics, who today account for 20.2% of the region’s residents — over a quarter more than a decade prior.

"When I was growing up in Westbury in the 1960s, there was really no Hispanic community here to speak of, outside of New York City. My surname was typically assumed to be an Italian name," said Tom Cabrera, who is of Puerto Rican descent and who has two abstract compositions in the show.

After a 30-plus-year absence, the abstract painter and professional jazz musician returned to Westbury and was surprised to discover how multinational his hometown had become.

"We have among us folks from the entire Latin American world — the Caribbean, Central and South America, and Mexico," he observed. "If my dad were alive today, he would be delighted to hear the sound of his first language spoken everywhere in his adopted town."

Spanish can also be heard in Westbury Arts’ bilingual programming and read on its website.

"We developed a translate button. We want to make sure we are reaching the people in our community, that they feel they are welcome in our space," said the center’s president, Julie Lyon, who, with Cabrera (her husband), is among the 6-year-old, formerly homeless organization’s founding members.

The 19 works on view in "Latinx Thriving" represent a panoply of Spanish-speaking countries, artistic styles and themes. The exhibit has been accompanied by a series of community events including music, dance and outdoor activities.

"I believe all artists’ work reflects pieces of who they are," said Anahi DeCanio, a Uruguayan immigrant from Port Washington represented by the William Ris Gallery in Jamesport.

Though DeCanio’s "Pasajes" is an abstract painting, she considers it somewhat autobiographical. Created for a solo exhibition at the Consulate General of Uruguay in Manhattan, the canvas’ yellows and blues derive from the flag of her native country, while other elements, she explained, reference the immediate members of her family.

"I used my dad's geometry tools and my mother's old scissors to cut collage papers that were from an actual collection of vintage childhood magazines I loved and still hold." Other early memories DeCanio shared with her late sister are represented with text embedded in the body and perimeter of the work.

Similarly, Balmori conveys fragments of himself layered in his imagery.

"I have had to carry multiple identities learning multiple languages, retaining our traditions and customs while assimilating into the American culture," he said, citing influences ranging from such Hispanic masters as Salvador Dali and Frida Kahlo to indigenous art from El Salvador to animé including Pokemon and Dragon Ball Z. "My artwork is basically my diary. It is like a giant therapy session through the stroke of a brush on canvas."

The expression of Silvia Maria Rey’s heritage and experiences as an immigrant in her work are arguably less cryptic. The longtime Melville resident’s pastel "Once Upon a Time on a Cuban Beach," based on an old snapshot, pays direct homage to her early life in her mother country.

"It depicts a 2-year-old me sitting on the edge of a beach, soft waves lapping at our legs while I collect seashells and place them in my small pail. Although it dates back to the early 1950s, I felt I had to bring back to life the fond, sweet memories depicted in that very faded black-and-white photograph," she explained.

"Cuba, where my story begins…," Rey’s other painting in the show, presents a more schematic composition, featuring a Cuban flag, palm tree and map-like outline of her Caribbean birthplace.

"I felt that this was the perfect complement to the painting of me and my father at the beach and reflects that no matter how long I have lived outside of my native land, my Cuban roots are deeply embedded in my soul," she said.

As a first-generation Honduran American with deep connections to the Westbury community, self-taught photographer Ren Zelaya reflects on his own culture against the backdrop of the region’s rich diversity. The two poetic black-and-white cityscapes he contributes, he said, "are a nod to the greatest city on Earth" and its fusion of nationalities.

With the significant rise in the Hispanic population, Zelaya is excited by its growing influence, noting with pride how the Salvadoran and Honduran street food "pupusa" (a cheese-stuffed grilled tortilla), for example, has quickly become part of the local cuisine.

"Now that Latinos are the predominant immigrant group, we can share some of that wealth of culture and enrich this nation in the same manner that previous waves of immigrants — Germans, Irish, Italians, Chinese, et al. — have done for the past two centuries."

With a legacy that includes such seminal figures as Frida Kahlo, Wifredo Lam and Doris Salcedo, to name a few, "our contributions to the artistic landscape of Long Island, New York, and the U.S. are not new," noted Leonardo Falcón, a professor of history and Latin American studies at Nassau Community College. "Latinos have been fundamental to the fabric of this nation since its establishment and those contributions go beyond the arts. Our presence has also been key to the development and strengthening of the political, academic and scientific community, and will continue to do so."

Nonetheless, Rey, for one, recalled the significant prejudice and culture shock she experienced after moving with her family to the United States from Havana in 1961.

"It made me realize the schisms that are so prevalent in our society," she said. "It is my fervent hope that our collective work will have a great impact on educating more people about the contributions of the Hispanic/Latino population."

"The beauty of the arts is its ability to connect people on common ground," said Lyon.

Ronkonkoma’s Paul Rodriguez, a Puerto Rican children’s author and artist whose cartoonish, text-based paintings are featured in the show, agreed. "It’s all right there in the art we make — the beauty and strength of human diversity."