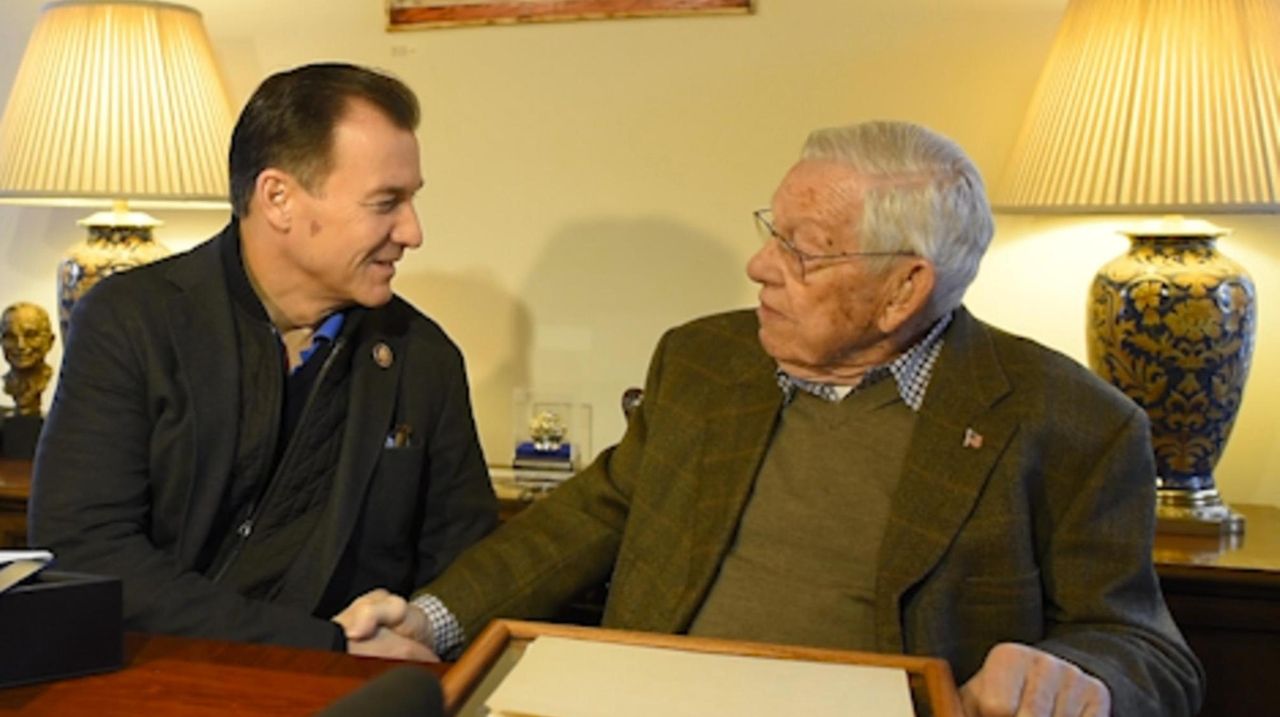 Rep. Tom Suozzi meets with Battle of the Bulge veteran Eugene Leavy in advance of his trip to Belgium to commemorate the 75th anniversary of the historic WWII battle. Credit: Newsday / Johnny Milano

When Eugene Leavy recalls shivering through the blizzards and freezing rain during the Battle of the Bulge, he folds his arms over his chest as if the cold is still in his bones.

Leavy, 94, of East Northport, was just a teenager when he found himself in the largest and bloodiest battle fought by the United States during World War II.

"You're trembling, and trying to do something to stop from shaking," Leavy said. "It's a penetrating cold."

On Friday, Leavy shared his battle experiences with Rep. Tom Suozzi as the Glen Cove Democrat prepared to fly with other members of Congress to Belgium for the 75th anniversary of the battle.

Displaying the modesty so prevalent among the "Greatest Generation," Leavy made clear that he was no military hero, but more like a grain of sand in a battle that included more than 500,000 Americans.

"I didn't even know I was in the Battle of the Bulge," he said, as he sat down with Suozzi at his Huntington office. "I was just a private. The sergeant told me what to do and I did it."

Coming in late 1944, the battle was the Germans' last-ditch effort to turn the tide of the war, which was favoring the Allies following their successful D-Day invasion of Normandy. On Dec. 16, with the winter coming on, the Germans fought to break through an 80-mile, thinly stretched American line that crossed through the Ardennes forest in Belgium.

"We held the line," recalled Leavy. "They never broke through, but they pushed us back."

Leavy lost his best friend, but he won't talk about that. Another buddy was killed by mortar fire.

Leavy said he became a different kind of person, taught "to kill a guy before he kills you," something he could not imagine himself doing now. He didn't think much about the battle's role in history, he said.

"You focus on this minute," he said.

His skill was driving, so the officers put him behind the wheel of a Jeep that he drove, fast and sometimes close to crazy, to deliver messages to various units. That Jeep took him over some hard road. Shrapnel from an explosion blew a hole in the back of the Jeep, nearly striking him in the back.

He was awarded a Bronze Star for bravery when he successfully sped through enemy fire to deliver a map and a message, he said.

Suozzi, a second-term congressman who grew up in Glen Cove, recalled that his own father was a navigator on a B-24 airplane during World War II, stationed in Italy.

Suozzi asked the veteran about fighting the harsh weather in Belgium.

"We wired blankets together to make a sleeping sack," Leavy said. "You wrapped a towel around your neck as a scarf."

Leavy also talked about the emotional toll of war, having seen men he knew killed, and wondering for a long time afterward why he escaped death when so many others died. The Americans suffered more than 75,000 casualties.

After the war, Leavy married a German woman and stayed in Germany, working for the Army to ensure that the Germans didn't place any Nazis in top positions. Then the couple returned to the States where they had two children.

To thank Leavy, the congressman gave him a flag that had flown over the U.S. Capitol, folded and framed.

"From a grateful nation, I just wanted to say thank you," Suozzi said.