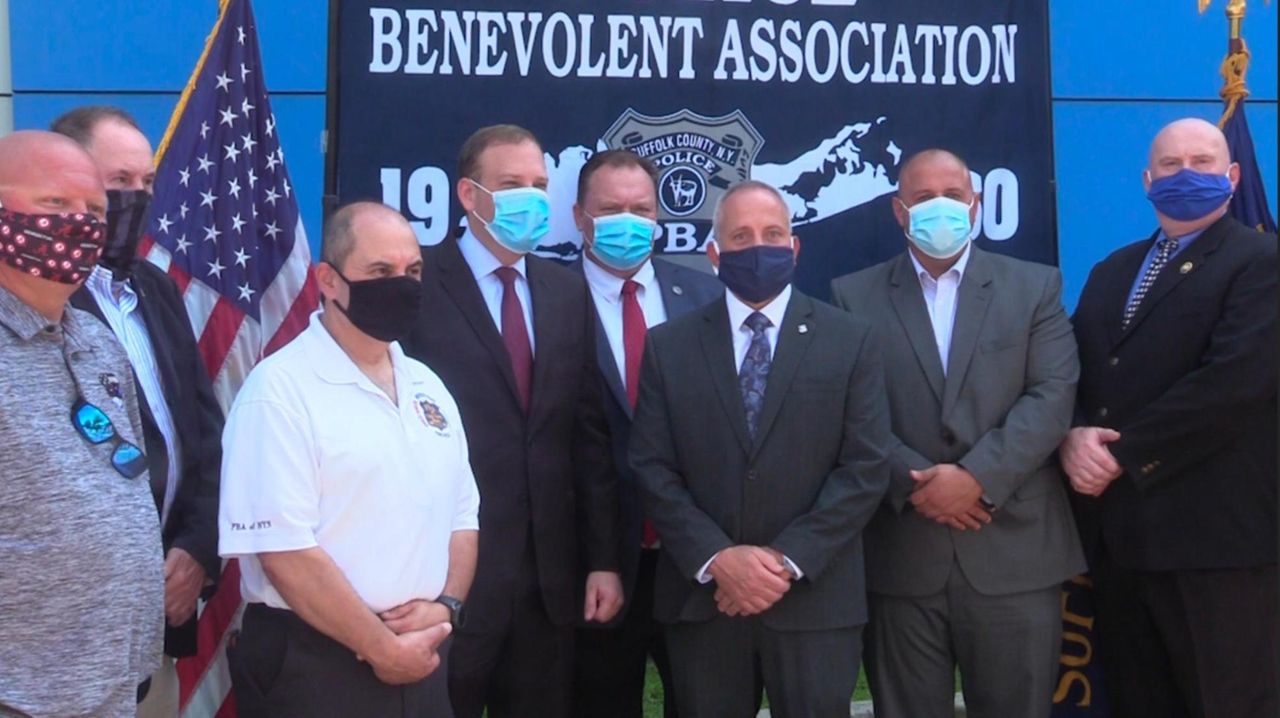 The Suffolk County PBA announced on Tuesday that the police union is endorsing Rep. Lee Zeldin in his reelection bid. Credit: James Carbone

Long Island's largest police unions endorsed Rep. Lee Zeldin Tuesday in his bid to win a fourth term in Congress, arguing the candidate remains an ardent supporter of cops at a time when many public officials and activists are calling for widespread police reform.

“Lee has showed throughout the years his continued support for law enforcement and even in our most tumultuous times, when police officers have become a routine pinata for attacks from the media and the public alike,” Suffolk Police Benevolent Association president Noel DiGerolamo said during a news conference at his organization’s Brentwood headquarters.

“He has been unwavering in our support and stands with us on a continuous basis, knowing that it is the men and women who don a uniform every day who keep the peace and civility in our society,” DiGerolamo said.

Zeldin thanked the unions for their endorsement and said it was important to stand with law enforcement officers who have come under fire since George Floyd’s death while in the custody of Minneapolis police sparked nationwide protests this summer.

“My message to all these men and women is that we have to have their back through this fight when it matters most, give them the tools, the resources, the laws that allow them to protect themselves and to continue to do their jobs,” Zeldin said.

Zeldin, an ally of President Donald Trump, echoed some of Trump’s recent talking points when he spoke about how violence and contempt of police has spread to New York City, Chicago, Portland, Seattle and other big cities.

Zeldin blamed Democrats for what he said was their failure to understand how far progressive activists want to go in dismantling police departments and the United States.

But his Democratic opponent said, "As a mother of two daughters, I’m fully committed to keeping Suffolk safe." Goroff, a Stony Brook University scientist, said, "That’s why I oppose defunding the police and in Congress will fight to ensure local law enforcement, public safety and social services have the resources they need to protect our communities."

Pete Paterson, a first vice president with the Nassau PBA, said his organization is supporting Zeldin because he has supported police throughout his political career.

“He truly knows his primary responsibility as an elected official is to keep the public safe,” Paterson said.