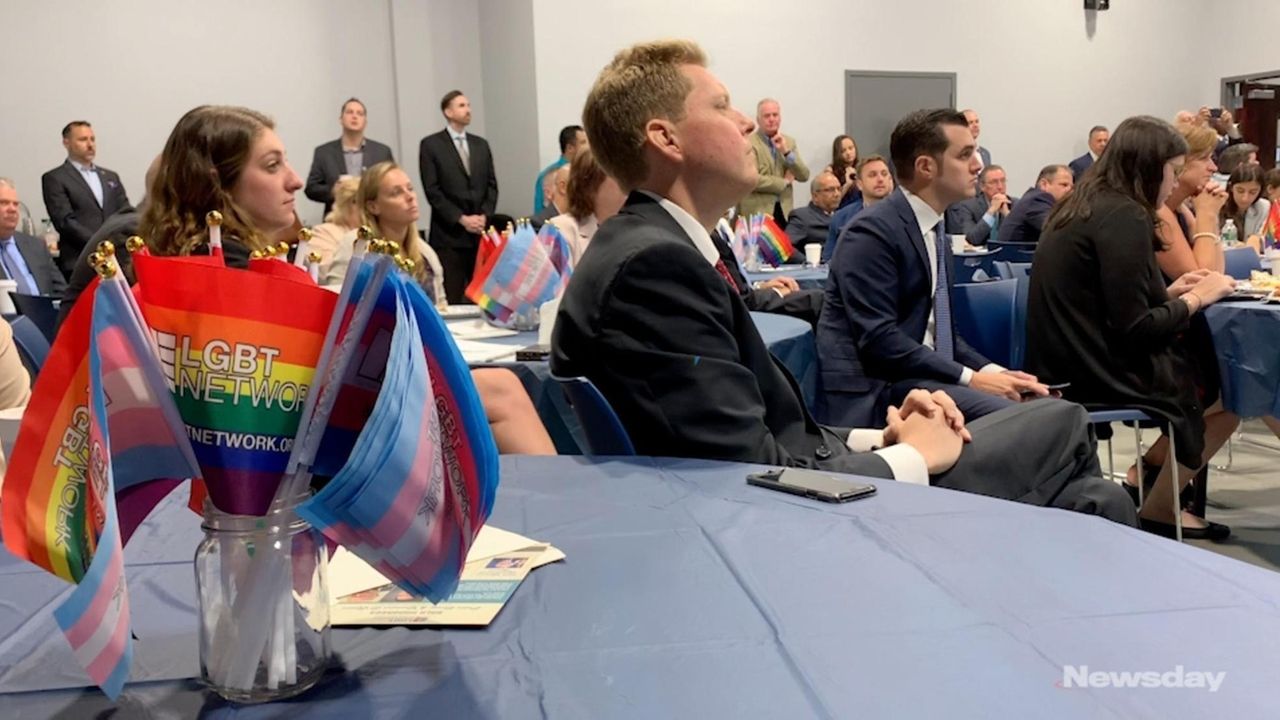 David Kilmnick, president and CEO of the LGBT Network, spoke Monday at the LGBT Network’s headquarters in Hauppauge about the upcoming programs designed to help members of the LGBT community feel safer and more comfortable across Long Island.  Credit: Howard Schnapp

The LGBT Network plans to open new centers in Patchogue and at Hofstra University as the gay rights organization continues to boom, its budget more than tripling in the last three years, group leaders said Monday.

At its second annual Legislative Breakfast, some 70 people showed up, including both Republican and Democratic officials from town and county governments. Last year about 30 people attended.

“We’ve really skyrocketed as an organization in many different ways,” said David Kilmnick, the president and CEO of the group, which he founded 25 years ago.

The organization plans to open the center in Patchogue by next summer, and the one at Hofstra at some other point to be determined.  Its budget has grown from about $2 million three years ago to $7 million today, Kilmnick said.

In late May it opened a new headquarters, a 15,000-square-foot facility in Hauppauge. The network also has centers in Sag Harbor and Long Island City in Queens.

“We are booming in a time when our services are needed more than ever before, because of the national climate,” Kilmnick said. “This isn’t a time to slow down. This is a time to speed up.”

According to Kilmnick, hate crimes are up nationally 17 percent since 2017 and hate crimes based on sexual orientation are up 45 percent in the region.

Officials at the event applauded the group’s expansion and work.

“We need to do everything we can to respect diversity in our community and provide safe havens,” said Jon Kaiman, a deputy county executive in Suffolk.

Nassau County Executive Laura Curran said, “Think of how far the LGBT community has come in those 25 years here on Long Island in very large part thanks to David Kilmnick and his team.”

In eary 2021, the network plans to open a 75-unit housing complex in Bay Shore for LGBT seniors, and temporary “pop-up centers” in communities around Long Island. The group is also developing a transportation system of vans that will shuttle people among its various centers for services.

The Patchogue center, located north of Sunrise Highway and east of Nichols Road near the Gateway Plaza, will include about 15 Network employees, plus workers from a health service organization such as Northwell or Hudson River Healthcare that the group plans to bring in, Kilminck said.

The Hofstra center would be unusual because it is a rare case of a college partnering with a gay rights and services nonprofit, he said.

“This is very unique not only for Long Island but for the entire country,” Kilmnick said.