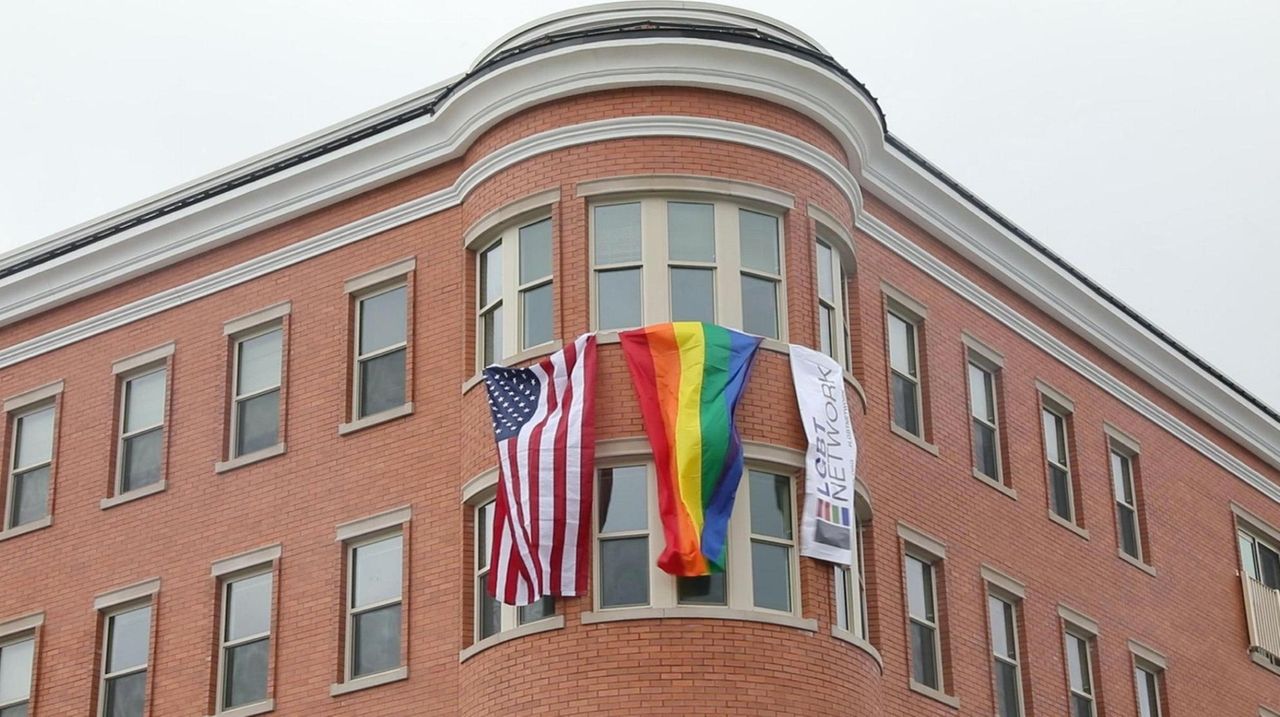 Residents have started moving into a new Bay Shore building that community members, elected officials and other advocates celebrated Friday as the nation's first affordable housing complex for LGBT senior citizens constructed outside of urban America.

"We are making history as the first of its kind in the suburbs in the nation," David Kilmnick, president and CEO of the LGBT Network, said as dozens gathered to mark the opening of a building where both an American flag and a rainbow Pride flag flew from the top story.

The nonprofit’s leader said the project was years in the making, and partly motivated by the notion of preserving history by taking care of LGBT elders who were "fighting for rights that we have today when it wasn’t as safe to do so."

The D&F Development Group, LLC of Levittown was behind the $30 million project, which was funded with a mix of state and federal tax credits, state loans, $1.5 million from Suffolk County and private investment, Newsday reported after the project’s 2019 groundbreaking.

The complex has 75 apartments, mostly one-bedroom units, that were filled on a lottery basis.

The four-story building is steps from downtown Bay Shore’s shops and near the local Long Island Rail Road station. A new LGBT Senior Center that will offer support and social services to residents is on the first floor.

On Friday, Suffolk County Executive Steve Bellone told those who came together at the site that the housing complex was "a testament to how far we have come as a region, as a state, as a nation."

He added: "This place sends out the message that our county is a place of diversity and inclusion and love."

Matthew McMorrow, director of LGBTQ Affairs for Gov. Kathy Hochul, said many pioneers of the LGBTQ movement are entering their golden years and have additional challenges compared with other seniors.

"Many experienced discrimination throughout their lifetimes, costing them jobs and promotions and stable housing, directly impacting their long-term financial health. Most have no children to look after them and many lost their friends during the AIDS crisis, leading to social isolation," he said.

McMorrow added that some of these seniors also have HIV or are faced with residing in assisted living or low-income housing where staff or other tenants can be homophobic or transphobic — forcing them to hide their true selves.

"Imagine that, fighting your entire life for your freedom only to be forced back into the closet in your golden years," he said.

Hochul's administration said in a news release that 12 of the building's units are reserved for those "in need of supportive services provided by the LGBT Network," and that the affordable housing complex also is for households with at least one resident 55 or older.

Kilmnick said in a Newsday interview after Friday's ceremony that his organization’s research showed there are about 10 similar housing complexes nationwide in urban areas, including in New York City, San Francisco, Los Angeles and Chicago.

"Our surburban LGBT elders probably need this more than anyone else, because of our geography and how folks are so far spread out and the traditional conservative nature of our suburbs," he added.

Building resident Elaine Felton, a gay Black woman who is a retired state employee, is still happily unpacking boxes in her third-floor unit after previously living in East Islip.

In an interview Friday, the 67-year-old recalled moving to Suffolk County years ago and being refused potential housing after an in-person apartment visit, only to call a day later and find out the unit she was interested in was still available.

"As a lesbian, as a Black woman, I have felt discrimination all of my life. But I was raised to be better," the Queens native said. "... The important part of it is, I feel safe because the spiritual environment of this place is amazing … I moved in a month ago and it’s magic."