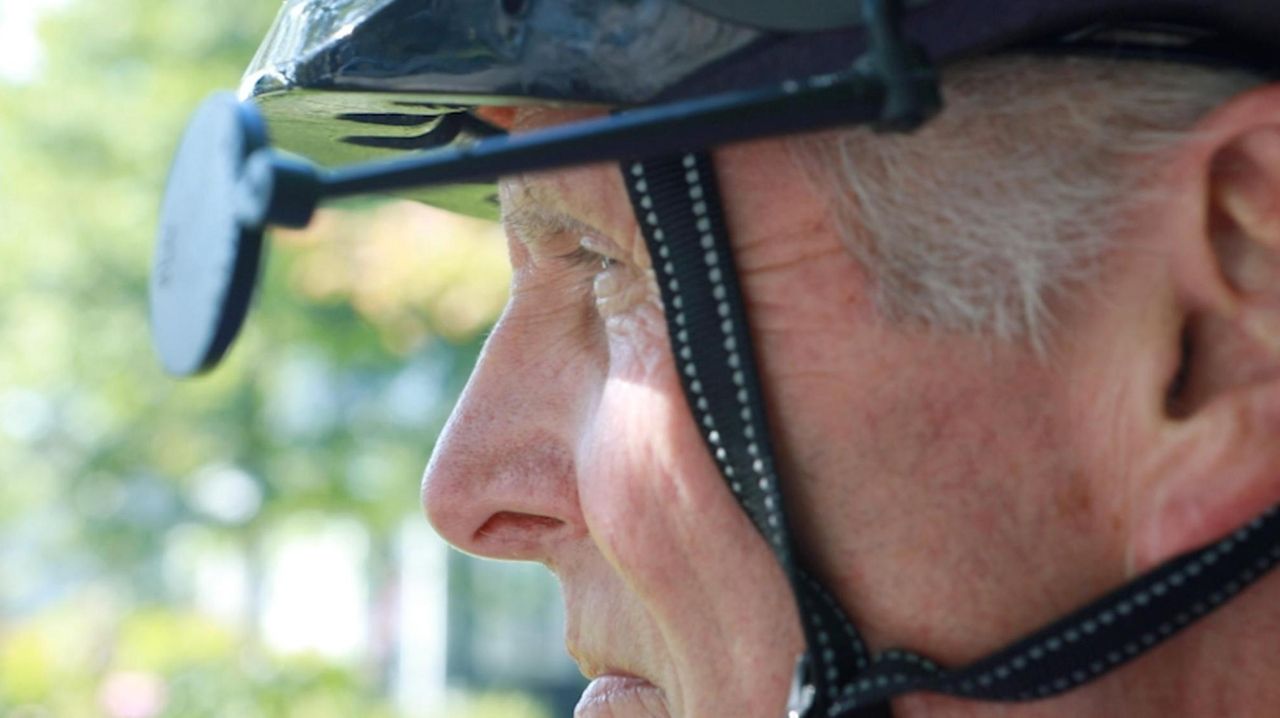 Cyclist Mike Petrizzi of Rockville Centre has been riding for more than 20 years and has had three serious accidents. Petrizzi talks about some of the precautions he takes before hitting the road on his bike. Credit: Newsday / Shelby Knowles

Long Island lawmakers, police officials and motorists are striking back at “ride outs” — a practice in which large groups of young cyclists take over roads to pop wheelies and play chicken with vehicles in what officials say poses the biggest bicycle-related threat to public safety on the Island.

“It terrorizes people,” said Nassau County Legis. John Ferretti (R-Levittown), who introduced an anti-ride-out legislation that lawmakers passed earlier this month after he said his constituents began flooding his office with complaints. “The community is outraged,” he said.

Ferretti’s bill would allow police to confiscate bikes used in ride outs, as well as a bill that would require riders up to the age of 19 to wear a helmet when riding a bike or a scooter. The current age is 14.

Ride outs, which are more prevalent is Suffolk and eastern Nassau where heavy traffic tends to be less of a problem, are forcing local communities to take notice, officials say.

Nassau and Suffolk police are also monitoring social media to learn when ride outs will be held — and then flood those communities with police officers to make sure cyclists are following the rules of the road.

Wiczynski said he has encountered three ride outs while driving on Babylon streets in recent months, and cyclists “freaked out” his young sons during one of the incidents. A kid tried to kick his wife’s car during another ride out said Wiczynski, who added other Babylon motorists said during meetings on the bill that they were threatened by ride out riders.

Ferretti said he expects Nassau County Executive Laura Curran will sign his anti-ride-out bill. Under his bill, parents of anyone over the age of 12 who participates in ride outs could be fined $100. Parents could get bikes back after paying the fines.

Ride out riders under the age of 16 charged under the Babylon law could also get their bikes back after police meet with their parents. Those 16 and older would be charged with a violation as an adult and would be subject to a $250 fine.

“I got a call from an officer in the Eighth Precinct,” Ferretti said. “He said the kids know we can’t do anything about it. You can charge a minor with reckless endangerment, but the statute doesn’t cover this type of behavior.”

Inspector Kevin Kane, commander of the Suffolk County Police Department’s First Precinct, said ride outs are often driven by social media. Organizers announce the events on Twitter, Instagram and other social media platforms, he said. They later post video on social media that shows cyclists weaving in an out of traffic and taunting motorists.

Kane, whose precinct includes the Village of Babylon, said his officers broke up one ride out earlier this year by simply showing up after seeing an announcement on social media. Suffolk Police Chief Stuart Cameron, however, said organizers are dodging police by withholding the location of a ride out until the last minute, or distributing the location by word-of-mouth. There are often few consequences even when officers directly encounter ride out events, Cameron said.

“We do not chase them,” Cameron said. “We don’t want anybody to get hurt.”

Law enforcement officials don’t have statistics that breakdown bike incidents, but they say the number of cycling deaths has remained consistent even as the number of people killed while riding bikes in New York City has surged this year.

Nassau police say three people have died in 2019 while riding bicycles in the department’s jurisdiction, which does not include parts of the county served by state police and other agencies. The latest fatality was Lorenzo DiBenedetto, 66, of East Massapequa, who was struck by a 2011 Honda Pilot on Aug. 27. Three cycling fatalities were reported in 2018 countywide — including communities not in the Nassau County Police Department’s jurisdiction — while five were reported countywide in 2017.

By comparison, one person on a bicycle — a 30-year-old man named Alexis Velasquez who police said was struck by a hit-and-run driver in East Patchogue in April — has died in Suffolk County so far this year. Six cyclists were killed in Suffolk County in 2018, according to data provided by police, while four were killed on bicycles in 2017.

Cycling fatalities in New York City, meanwhile, doubled in 2019 compared to the previous year. Mario Valenzuela, a 14-year-old cyclist from Astoria, became the city’s 21st bike fatality this year when he was struck and killed by a private sanitation truck in Queens on Sept. 21.

Authorities and cycling advocates said the differences between the New York and Long Island fatalities is as fundamental as the difference between a densely populated city and a sprawling region comprised of suburban and rural communities. “Long Island is not as conducive to biking as the city is,” Kane said.

“There are potholes everywhere on Long Island,” said Bill Selsky of East Meadow, president of the Long Island Bicycle Club. “You can lose your balance and fall. You can get hit by a car.”

Mike Petrizzi, a 72-year-old Rockville Centre resident who says he logs 200 miles a week on his bike, said he’s been involved in three accidents in recent years, including a crash with a car that left him with a broken clavicle and eight broken ribs. Petrizzi said he was hospitalized for five days as a result of that accident.

“That one almost made me quit cycling,” Petrizzi said.

Most Long Island cyclists, experts said, ride for recreational purposes, on suburban streets, parks and trails designated for hiking or biking. New York residents, they said, are much more likely to use bicycles to commute. Nearly 49,000 New Yorkers used bicycles for their daily commute in 2017, according to the New York City Department of Transportation, nearly double the 25,000 in 2010 and more than triple the 15,000 in 2000.

Cops: Bicyclist hit by van, car while doing stuntA bicyclist was critically injured in Baywood when he popped a wheelie in the road and was hit by a van and a car, police said.