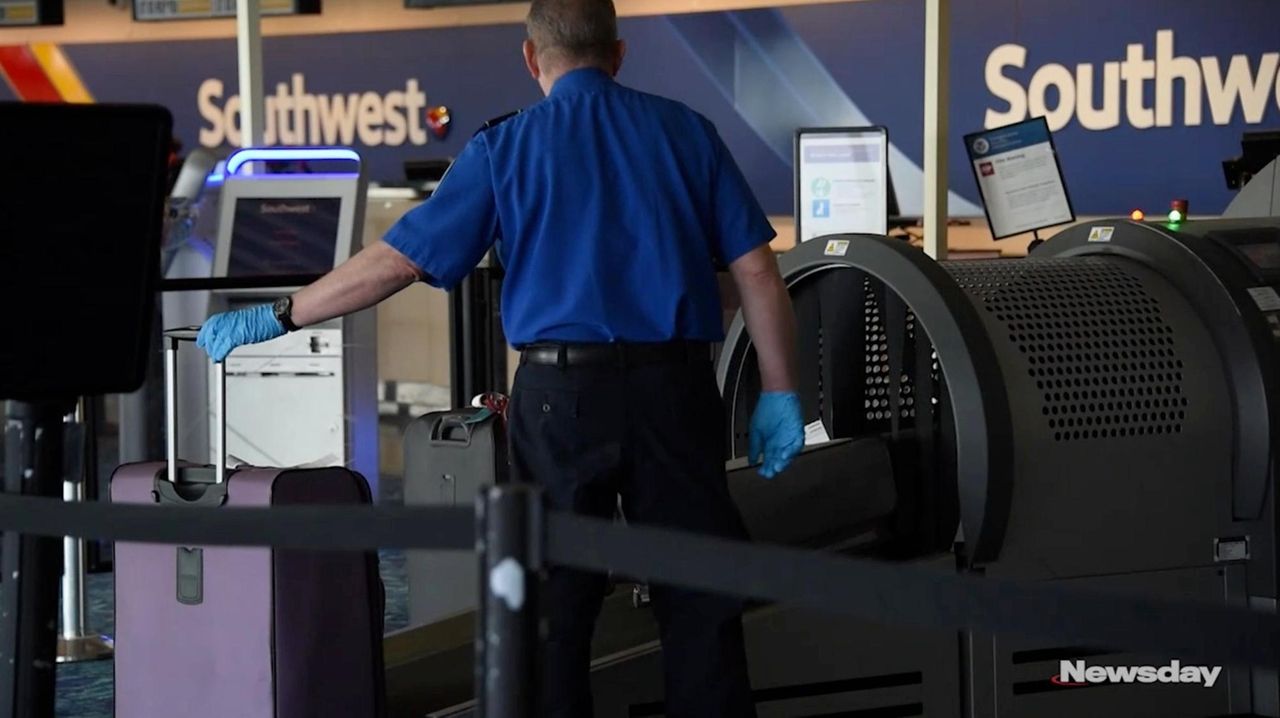 Visitors at the Fire Island Lighthouse on Captree Island and people at MacArthur Airport talk on Saturday about the effects of the longest government shutdown in the nation's history.  Credit: Danielle Silverman

Walking hand in hand, or rather glove in glove, the couple strolled beside the Fire Island Lighthouse Saturday, remembering a moment 20 years ago that didn't seem romantic until now.

Jonathan Moran and Carissa Collins weren't thinking about the partial government shutdown closing the historic black-and-white lighthouse operated by the National Park Service. They weren't planning to go inside anyway.

Instead, the Riverhead couple were busy reminiscing that two decades ago they came here just as friends to walk this boardwalk and along the beach. Over time they lost touch, and then recently rediscovered each other. They fell in love, and, well, the rest will be their history.

"We were saying that back then we both had things for each other," said Collins, 41, warmly covered from head to toe. "You don't get many second chances."

LIers rally to help those affected by shutdown

As the shutdown stretches on, the impact on people visiting Long Island sites staffed by federal workers seemed minimal Saturday.

People might be complaining during the week that they can't get through to the Internal Revenue Service on the phone, but on Saturday, visitors reported a little inconvenience, some disappointment, or nothing at all at Island museums, tourist sites and even the airport in Ronkonkama.

That stands in stark contrast to the mood of thousands of federal workers who have gone three weeks without a paycheck, some of whom are reaching out to food pantries, spiraling into debt, and worrying about the next bill in the mail.

For everyone else, the shutdown meant they couldn't climb 167 feet to the top of the Fire Island lighthouse and watch the sun fight its way through an overcast sky. (And when it did, the sunshine transformed a dull gray sea into a sparkling masterpiece.)

If ever there was a good time to have a government shutdown, Saturday may well have been it. The day was so cold it drew few out to the lighthouse. And among those who did brave the chill weather, none said they planned to enter the lighthouse. They mostly wanted to walk along the nature trail and the beach.

Over at the federally operated Sagamore Hill Historic Site, where President Theodore Roosevelt had lived, Jen Frisella and her 10-year-old daughter, Maddie, were disappointed they couldn't go inside. But the Glen Head mother did her best to make it a teachable moment for her daughter.

"As best I could, I tried to explain the shutdown and what's happening to the employees," she said. "That led to (talking about) the border wall and the budget."

Most of the people who showed up at the Oyster Bay site were there to walk the nature trail and stroll around the grounds, not go in the house.

"We just came out to enjoy nature, and take the dogs for a walk," said Tara Kiprik, 37, of Douglaston, Queens.

But even for these folks, there was a singular inconvenience that should not be understated in its importance.

"We couldn't use the bathroom," Kiprik said.

The timing may also have been right for people using Long Island MacArthur Airport, where, from a traveler's perspective, there was little sign of the shutdown.

Federal workers, including security employees, air traffic controllers and others, have been required to come into work even though they are not being paid. Some travelers have reportedly voiced concern that the shutdown could compromise the safety of air travel.

But on Saturday afternoon, the lines for security checks, airline check-ins and rental cars were small, perhaps just a few people. That may well have something to do with this being a generally slow time of the year for travel, coming so close after the holidays.

Julissa Marquez, 23, said she came to the airport extra early because she had heard that some federal employees were not showing up for work at airports.

"It looks pretty normal," said Marquez, of Queens, as she sat beside her luggage in a row of terminal seats that were otherwise empty. "I thought it would be busier."

Marquez, who was flying to Fort Lauderdale, said she liked to use this airport, that it was quieter and easier to get through than other area airports.

"It's cheaper than LaGuardia," she said.

Jennifer Friebely, who was helping some friends move to Florida, said she felt bad for the airport workers.

"I wish they had a bucket (to make donations) to help them," said Friebely, 55, of upstate Fishkill. "They're here, they're working and they're helping us. It's not fair."

On LI, shutdown hits federal workers' walletsSome Long Islanders are among the thousands of federal workers who missed a paycheck Friday, the first since the shutdown took effect Dec. 22.