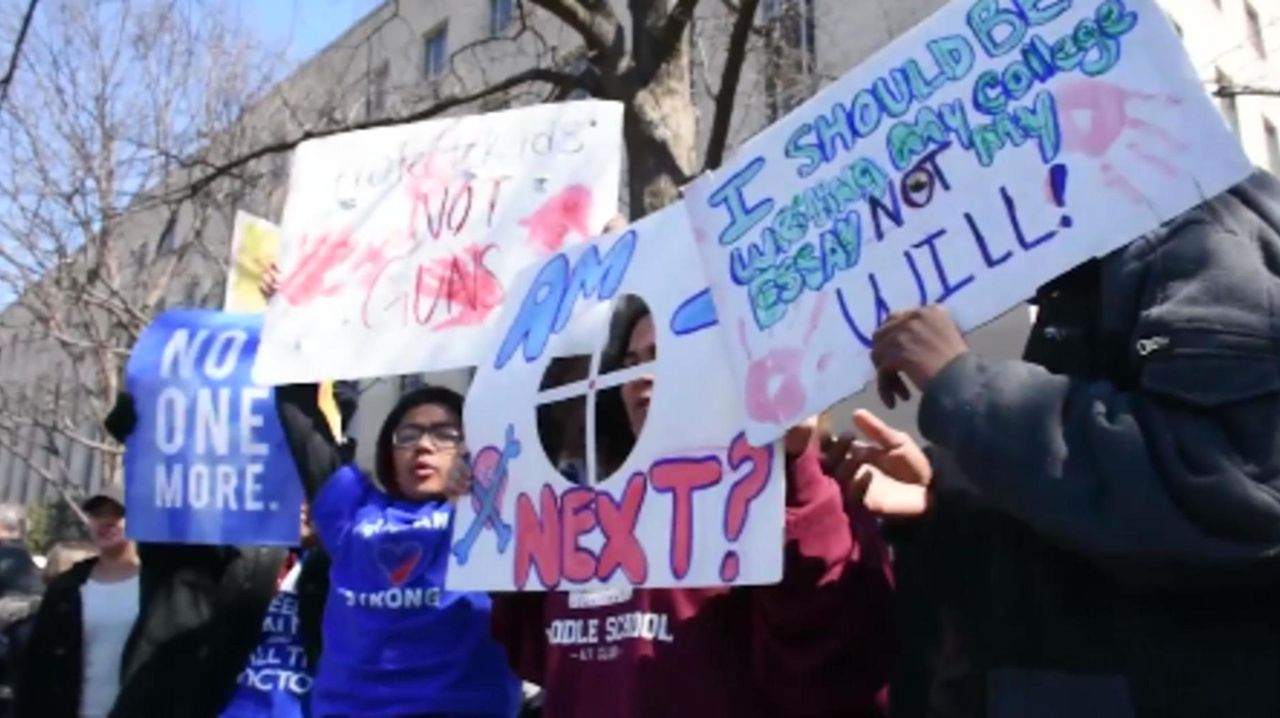 Stony Brook University journalism students attended the March for Our Lives Saturday in Washington, D.C., where they filmed sights and sounds of the action.  Credit: Stony Brook School of Journalism

WASHINGTON — Long Islanders who traveled for hours — by trains, planes, bus and automobiles — to be part of a national movement for gun control got what they came for after a three-hour rally of rage, pain and fierce calls for action.

“I think the future has spoken today,” said Caren Ray-Arnone of Port Washington, who drove down with her daughter Allyson Arnone, 24, as a member of Everytown/Moms Demand Action.

“We’re seeing people from everywhere,” said Laura Burns of Rockville Centre, a state leader in the group. She, too, brought a daughter, Natasha, 12. “It’s such a testament to the Parkland kids . . . I’m so proud of them.”

Amy Connor of Northport and her son James, a ninth-grader at Northport High School, flew in early and found spots near the stage. The experience, she said, was “unbelievable. I spent the day vacillating between tears and laughter and anger and jubilation. I can’t even begin to say how much hope these kids have given me.”

North Shore Senior Danielle Fossett, 18, came out to see “the demonstration of students coming together for an issue that is not necessarily political.” Says she “hopes there will be some update to gun regulations.” #MarchForOurLivesdc #LIMarches pic.twitter.com/ael7f95UJ7

Students from Parkland, Florida, organized the march in a little more than a month since 17 students and staff were slain in their high school by an ex-student shooting an AR-15.

Seeing them in person on that stage and the “entire march was extremely inspirational,” James Connor said afterward. “The entire event showed our solidarity with Parkland and that we are not afraid to make some noise if it provokes change.”

Kellie Corrigan of Northport accompanied her 15-year-old daughter to the march.

“I’m a parent, marching for the lives of our children, my children, everyone’s children,” said Corrigan, whose daughter and son are in high school. “It’s as simple as that. Our kids are much more important than guns. And it doesn’t seem like Congress wants to do anything.”

She said she was inspired by the students in Parkland, who were “eloquent,” “passionate” and “articulate.”

How a day of anti-gun violence marches unfolded

“Today I saw cynicism wane and democracy prevail,” said Mackenzie Daly, 17, a Mattituck High School student who traveled to the march on a bus Saturday morning. “It was a wonderful day.”

“I’ve always been very active in political movements,” said the 17-year-old who attended other rallies, including the Women’s March.

“Enough is enough,” she said. “It’s enough that the senators and congressmen and the president just get to hide in their office, and they never come out and get to witness and feel the fear that we do going to school everyday.”

Earlier Saturday, nearly 40 students from Northport and North Shore school districts boarded a bus to Washington, D.C., at 3 a.m. Bundled up for the weather, they were armed with posters, buttons and T-shirts calling on the government to take action for the safety of students in the wake of the Parkland shooting.

“You have a vote, use it,” read one sign. Zoe Perles, 17, of Northport, who has participated in several marches in the nation’s capital, including the Women’s March, wore a pin that said: “Shut up and March.”

Calls for strict gun laws at massive D.C. rallyLarge crowds are expected to descend on Pennsylvania Avenue on Saturday as part of the "March for our Lives" anti-gun violence rally organized by the grieving students of a South Florida high school shooting. LIers rally for Fla. survivors, gun controlNumerous events were held across the Island as protesters seek stricter laws and demand legislative action. How a day of anti-gun violence marches unfoldedThousands of teenagers, parents and supporters are marching to demand solutions for gun violence around the country, including in D.C., on LI and in NYC. See live updates from Newsday's reporters and Long Island students.