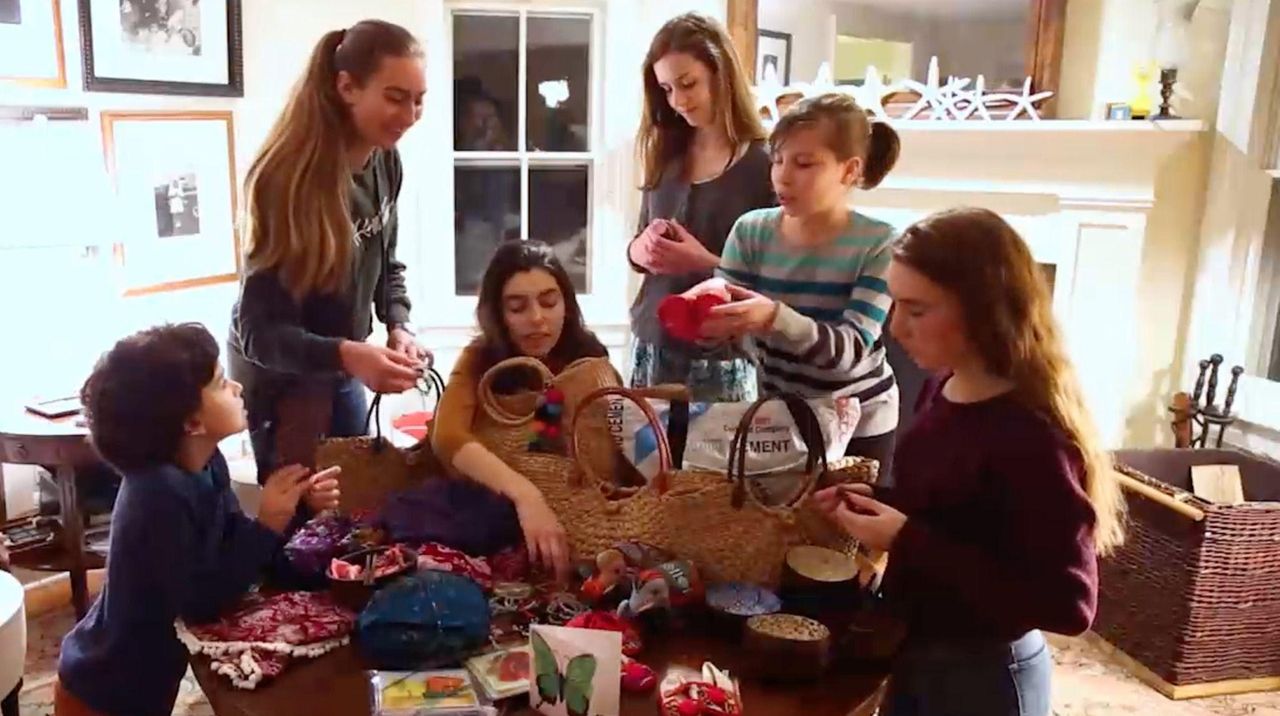 After witnessing poverty during a tour of Cambodia, Emmy Specht, now 14, of Bellport, became inspired to do something. With her sister Rae Specht, 17, and two friends -- Madeleine Joinnides, 17, of Brookhaven hamlet, and Eloise Kocay, 15, of Bellport -- she started Four Girls for Families, raising money for education and clean water. On April 5, 2017, they reported that their charity has raised $280,000, built one school and started a second, and provided several thousand water filters to Cambodian communities. Credit: Randee Daddona) (Photo Credit: Specht and Kocay families

Seven years later, they and two of their friends have raised $280,000 to build one school and provide clean water for thousands of rural villagers in Cambodia. Now they’re laying the groundwork to build another school.

“I had never been to a place that was affected by poverty,” Emmy Specht, 14, said of the 2010 family trip where she saw children sitting on empty rice pails begging for money. “We were confused and upset, but we didn’t know how to help.”

While Cambodia is about 8,750 miles from where the girls live, it remained on their minds.

When they got back home to Bellport, Emmy and Rae, 17, started learning as much as they could about the country and researched ways to help, they said. Their effort was then joined by one of their friends from the private Laurel Hill School in East Setauket — Madeleine Joinnides, 17, of Brookhaven hamlet. Last year, another schoolmate, Eloise Kocay, 15, of Bellport, joined the effort.

The sisters that first year sold handmade bracelets at pop-up stands to raise money, then Bellport businesses owners allowed them to set up in stores. The teens also sold items during the Bellport Day celebration, they said.

They raised $7,000 doing that, family members said. The money was used to purchase $12 water filters in Cambodia. On their next visit there, the girls passed out the water filters, Emmy said.

When visiting Cambodia again in 2011, the girls bought locally made bracelets and pants, and sold them throughout the Bellport community when they returned.

“They only had a goal to raise $200,” said Joanne Specht of her two daughters. “This was something that was successful because it grew from their hearts.”

John Kocay, Eloise’s father, said the girls realized they could potentially fund a school or sustainability projects in a village.

In 2013, the teens established a nonprofit to keep their project going and named it Four Girls for Families, family said.

Local members of the Bellport Rotary Club had seen the girls raising money in 2011 and awarded them a $1,000 grant. Members of the club also applied for and received on the teens’ behalf a $55,000 Global Grant through Rotary International, which goes toward international humanitarian efforts, family members said. The money funded farming, water wells, water filters, outhouses and sanitation efforts in Pursat province.

The government of Cambodia on Nov. 2 issued the group of teens a certificate of appreciation for their work, family members said.

The families now visit Cambodia annually, paying their own way so that all money raised goes to charitable projects, they said.

Their most recent trip was last month. They visited the Sret school, named after Sret village where the school is located. It opened in November after eight months of construction.

Rae Specth, who recalled watching the schoolchildren playing soccer and learning English in a classroom, said the long hours raising awareness about Cambodia were worthwhile.

“I’m so passionate about this issue,” she said. “It’s so exciting to see that everything materialized.”

The group last month also toured the future site of their second school in Kok Srok village, and passed out water to people in a rural village outside the popular resort town Siem Reap in the northwestern part of the country.

“It makes their day to know someone across the world is thinking about them,” Joinnides said of the villagers she met.

“Living here in the USA, we don’t have any problems like this,” Kocay said. “We’re a little blind to things happening in less developed countries.”

In total, the teens’ effort has resulted in more than 3,000 water filters, countless water bottles, 20 deepwater wells, four rainwater catchers and houses for homeless families have being donated in several villages.

Joanne Specht said what the four girls have done is nothing short of miraculous.

“They’re changing the world for thousands of people,” she said.