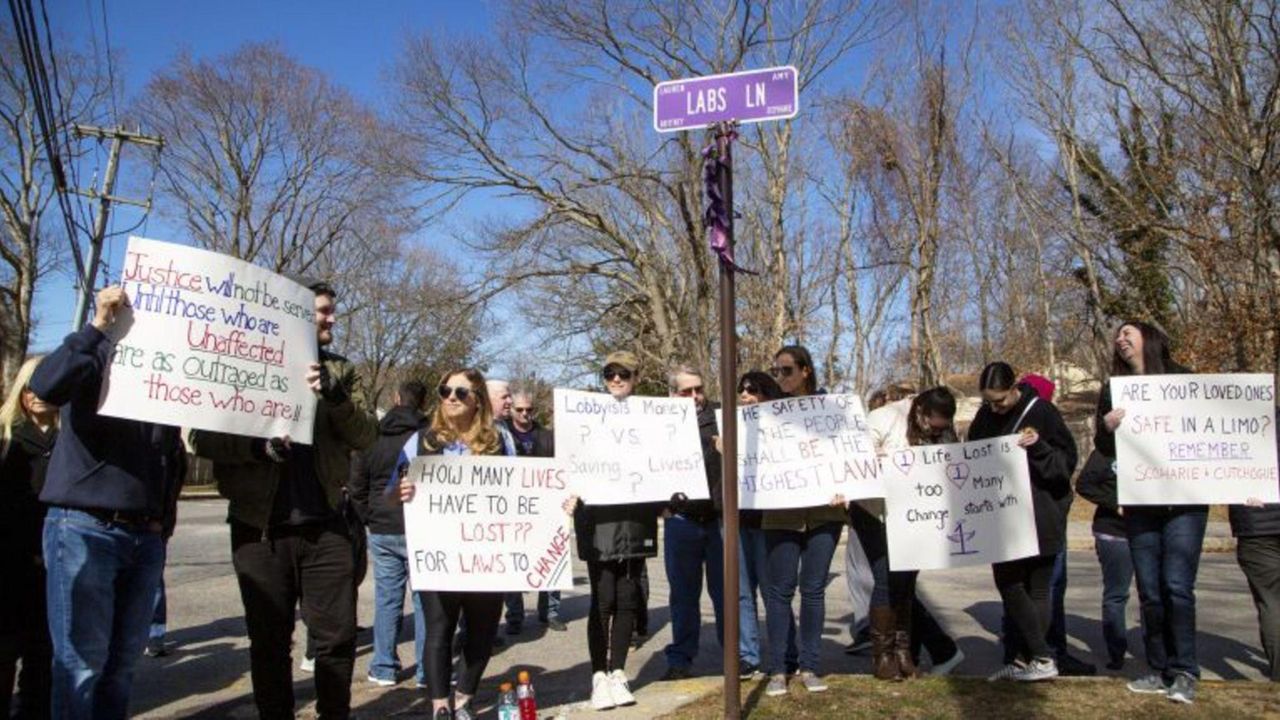 The families of the women involved in a fatal 2015 limousine crash on the North Fork and their supporters rallied on Sunday to urge state lawmakers to include limousine safety regulations in the 2019-20 state budget. Credit: Barry Sloan

The families of the women involved in a fatal 2015 limousine crash on the North Fork and their supporters rallied on Sunday, urging state lawmakers to include limousine safety regulations in the 2019-20 state budget.

Families of the crash victims, Suffolk County and Town of Smithtown officials and other supporters gathered at Central Road in Smithtown Sunday, which was dedicated last year as LABS Lane, to film a video lobbying for stricter oversight of the limo industry. LABS is an acronym for the first initials of victims Lauren Baruch, 24, and Brittney Schulman, 23, both of Smithtown, Amy Grabina, 23, of Commack, and Stephanie Belli, 23, of Kings Park, who were killed in the Cutchogue crash during a July 2015 winery tour.

Supporters wore buttons bearing the images of the eight victims, which include Olga Lipets, Melissa Crai, Alicia Arundel and Joelle DiMonte, who survived the crash. Others held signs asking lawmakers to remember the Cutchogue crash, as well as an October 2018 limo crash in upstate Schoharie that killed 20.

“Most people are taking limousines so they believe they are going to be safe,” said Steve Baruch, father of Lauren Baruch. “The fact of the matter is limousines, in general, are not.”

Gov. Andrew M. Cuomo has several measures to deal with the limousine safety issue in his proposal for the fiscal 2019-20 state budget due to be passed by April 1. Cuomo’s budget would increase criminal and civil penalties for putting unsafe limousines on the road. The package also would boost penalties for limos longer than 18 feet that make U-turns.

The Assembly and Senate removed most of the policy initiatives in Cuomo’s package in their own budget proposals.

“Saving lives cannot wait, and we hope the Legislature agrees," a Cuomo spokesman said in an email.

Other lawmakers told Newsday this week that such issues are better handled legislatively, with hearings and public debate.

"The Senate Majority has been clear that we support additional limousine safety regulations and will work with our partners in government, as well as stakeholders, to take appropriate and timely action," a Senate Majority spokesman said in an email on Sunday.

Baruch and others cited the need for commercial driver's licenses for limousine drivers, seat belt requirements and prohibiting limos from making U-turns as critical components to be included. The video made Sunday will be shared on social media and sent to Albany lawmakers imploring them to include the measures in the final budget deal, advocates said.

If their call isn't heeded, “it [the regulations] will get watered down to the point where the laws that need to be in there won’t be included,” said Paul Schulman, of Smithtown, father of Brittney Schulman.