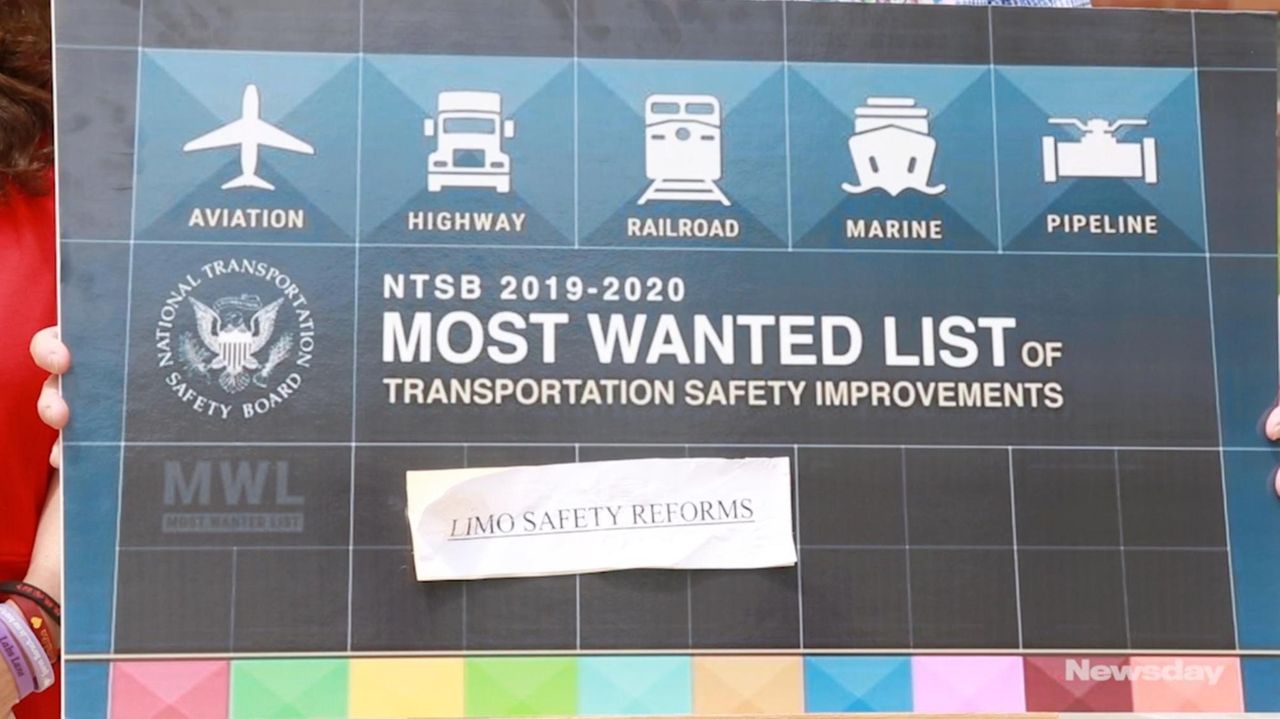 The New York Democrat, standing with the parents of four young women killed or injured in a 2015 stretch limo crash in Cutchogue, urged the NTSB to add limousine safety improvements to its 2019-2020 "Most Wanted" list.

The list — which serves as the board's road map for closing safety gaps to prevent transportation accidents — makes only passing mention of limousines in its 25-page report, pushing passengers to use properly adjusted head restraints and "strongly encouraging" the use seat belts if they are available. Congress utilizes the list to draft legislation, Schumer said.

"Limos fall within trucks and cars," Schumer said at a news conference at New Hyde Park High School, where seniors were to celebrate their prom Monday evening. "They are in no man's land. The death valley of regulations."

Schumer said if the Safety Board does not propose serious industry reforms in the next six months, Congress would draft legislation on its own.

“We share the senator’s concern over the tragic limousine crash in Schoharie, and we are continuing our investigation," said NTSB spokesman Christopher O’Neil. "We will make appropriate recommendations to improve highway safety on the basis of our investigative findings.”

Critics of the stretch-limo industry argue the supersized vehicles, which can carry 15 to 20 passengers, operate in a regulatory black hole, with few requirements dictating the use of seat belts in the rear compartment or the installation of reinforced anti-intrusion bars inside a vehicle’s doors and side panels.

The industry has faced increased scrutiny since July 2015 when a stretch limo, heading east on Route 48 in Cutchogue during a winery tour, made a U-turn and was struck broadside by a pickup truck. Lauren Baruch, 24, of Smithtown; Amy Grabina, 23, of Commack; Brittney Schulman, 23, of Smithtown; and Stephanie Belli, 23, of Kings Park were killed, and four others were injured.

A Suffolk grand jury investigating the crash found “the deaths were entirely preventable, caused by driver failure, improper limousine construction and inadequate regulatory oversight.” Criminally negligent homicide charges against the limo driver were dismissed after a judge found the grand jury was improperly instructed on the law.

In October 2018, 18 people in a limo and two pedestrians were killed when their modified 2001 Ford Excursion, packed with friends and family celebrating a 30th birthday, crashed in upstate Schoharie in the most deadly U.S. transportation accident in nearly a decade.

On Monday, the parents of the East End crash victims wore photos of the women on their lapels, draped by a purple bow, to celebrate what would have been Lauren Baruch's 28th birthday. After the crash the victims’ families created an online petition called LABS — the first names of the four women killed — to bring attention to the dangers of stretch limousines.

"Nothing has changed. Nothing happened," said Brittney Schulman's father, Paul Schulman. "The only thing that keeps me going is doing this for her and all of the other girls who are no longer here."

Penny Casey, president of the Long Island Limousine Association, which represents 100 area companies, said her organization supports the proposed reform measures. "We are totally in favor of all these changes," Casey said. "We are all about safety."

In March, the families of the Long Island and upstate limousine crash victims traveled to Albany to push state lawmakers to enact safety measures that could include escape hatches, consumer reports on cars and drivers and criminal charges for unscrupulous limo operators. But most of the proposed changes have gone nowhere.

"We are looking for safety accountability in an industry that has not been sufficiently regulated since its inception," said Nancy DiMonte of East Northport, whose daughter, Joelle was seriously injured, but survived the Cutchogue crash. "This will get done. We won't fade away."