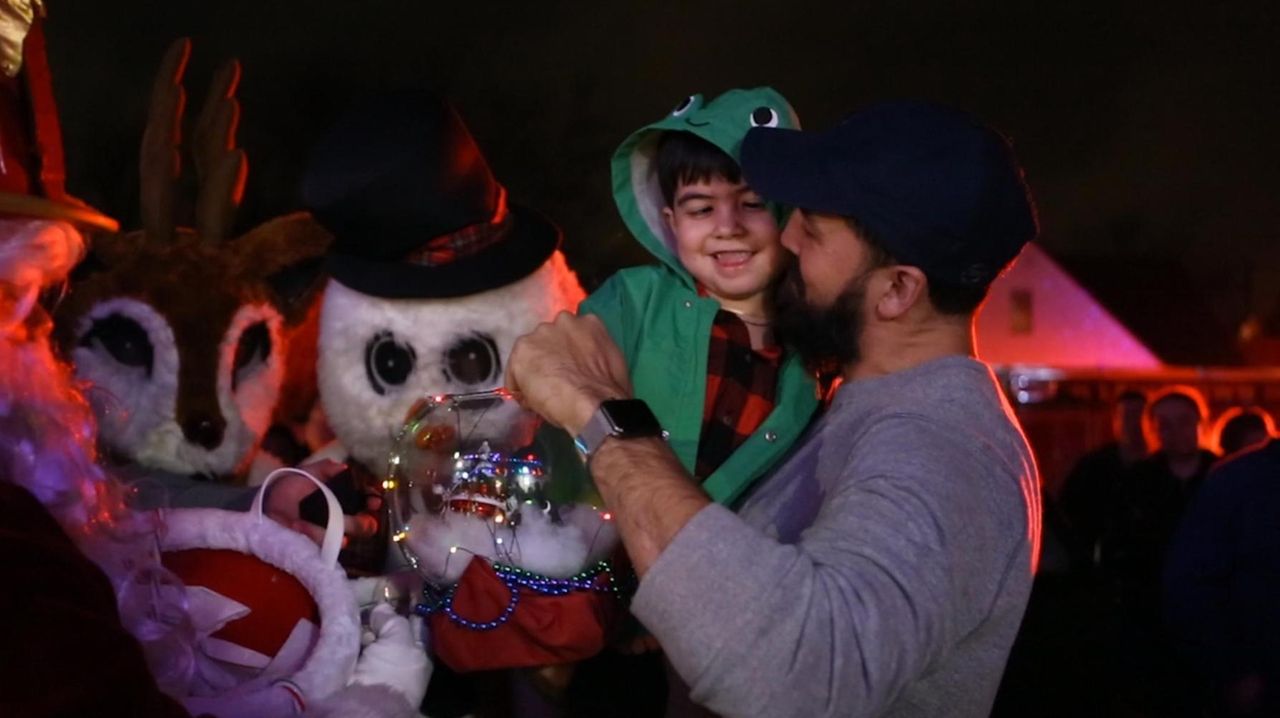 Five-year-old Luis Mendez, who has a rare, terminal brain cancer, lit up on Friday when Santa Claus came to visit his Wantagh home, descending from a top a fire truck as neighbors surrounded him and his family with love. Credit: Newsday / Alejandra Villa, Shelby Knowles

Five-year-old Luis Mendez has a rare, terminal brain cancer. A tumor has sapped his once-boundless energy and dampened his spirit.

But Luis smiled broadly on Friday when Santa Claus descended from atop a Levittown Fire Department engine that arrived at his house with sirens wailing and lights flashing. He smiled again when his father pulled a pile of letters and prayers from a red wooden mailbox constructed just for him on his Wantagh front lawn.

More than 1,000 people — some from around the corner, others from across the country — have made Luis’ challenges less daunting. They’ve sent money for medical treatment, prayers for spiritual sustenance, and toys.

Doctors thought Luis would not survive past February. Now he’s about to celebrate another Christmas.

“Without all the fundraising, the donations, without that, my son probably wouldn’t be here today,” said his father, Luis Mendez Jr., 40.

Luis was diagnosed in August 2017 with diffuse intrinsic pontine glioma, DIPG, a tumor that starts in a section of the brain above the back of the neck. Its victims are almost always children. Most live less than a year after diagnosis, according to the National Cancer Institute.

With no known cure, Luis Mendez Jr. and his wife, Karla Mendez, 35, traveled nine times to Mexico for experimental treatment. They take their son regularly for hyperbaric oxygen therapy, vitamin C infusions and oil from cannabinoids, the active components of marijuana.

On Wednesday, they will take Luis to a doctor in Manhattan in the hope he will put their son in a clinical trial.

Luis Mendez Jr.’s insurance paid for radiation, but it did not cover the other treatments. That’s why the more than $200,000 in donations have been critical, he said.

Much of that has been from local fundraisers, but the rest has come from other donations including a garage sale, donation boxes, a lemonade stand and a GoFundMe account.

On Friday night, about 70 people gathered on the Mendez driveway and front yard to await the fire engine carrying Santa.

Young Luis was feeling weak Friday, as he has for weeks as the disease robs him of his ability to walk, makes it difficult for him to eat and slurs his speech. But when he went outside — his father carrying him in his arms — he began smiling as Santa approached and said, “I came here just to see you” before sitting Luis on his lap.

Santa — Levittown fire Capt. Matt Angelletta, 43 — had never met Luis. A few of the firefighters know Luis’ grandfather and thought a visit from Santa would bring the boy some joy.

“It’s the greatest feeling in the world to put a smile on the face — even for a few seconds — of someone going through something like this,” he said. “I was holding back tears.”

After meeting Santa, Luis and his dad made their second trip of the day to the special mailbox, and found a thick stack of letters and prayers, along with cash.

Mendez reads the letters and cards to his son every night.

“It makes him happy,” Mendez said. “He likes people knowing about him and talking about him.”

Caring for Luis is akin to a full-time job. The couple also have twin 3-year-old girls.

Karla Mendez quit her part-time job as an ultrasound technician after the diagnosis.

The couple need the income and health insurance from Luis Mendez Jr.’s job as a Nassau County correction officer, so he couldn’t leave his job. He worried that after he burned through four months of accumulated vacation, holiday and sick time, he would have to go back to work, making it more difficult to care for his son.

Then one after the other, fellow correction officers donated their paid vacation, holiday and sick time. They continue to do so. As with other donations, some of these gifts of time come from people Mendez has never met.

"You see so many acts of kindness, the donations, the fundraisers — you see such beauty and goodness in people," Mendez said.