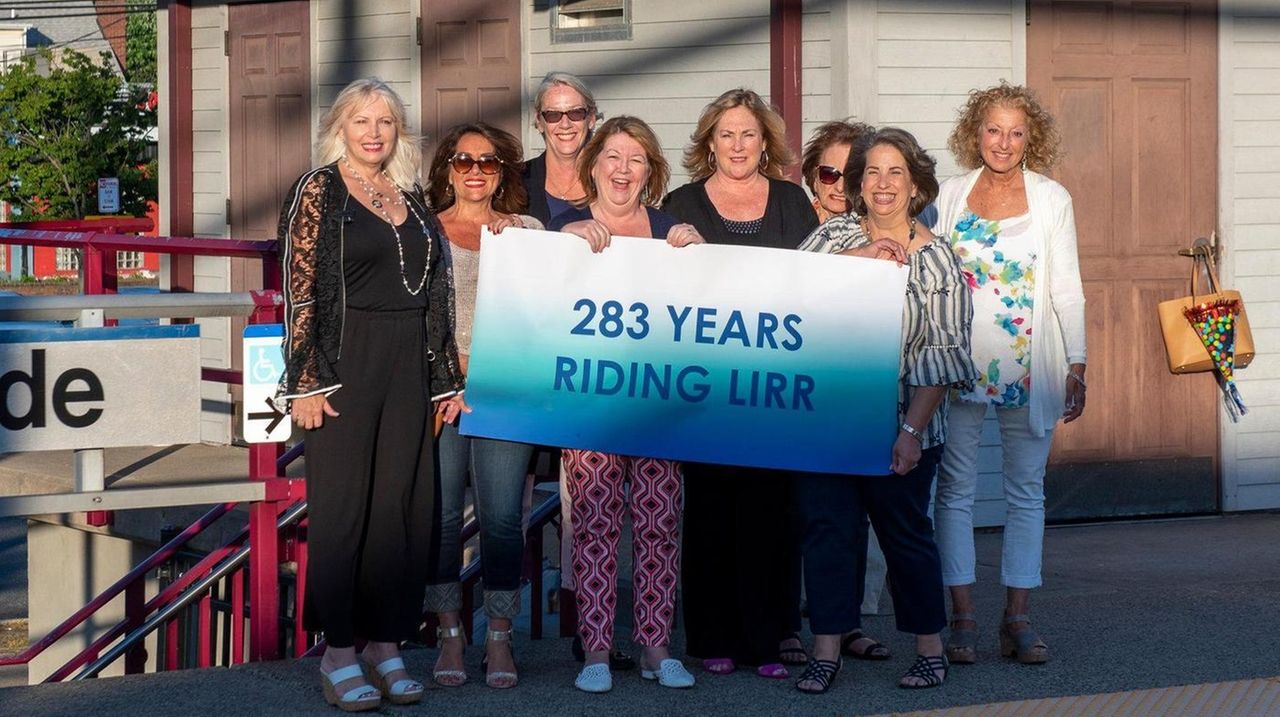 A group of friends who call themselves The Train Girls all met and became friends while riding the Long Beach line of the Long Island Rail Road. Combined, they have 283 years riding the LIRR, and have stayed close for decades. They talked about their lifelong friendship on June 12 and two days later had a reunion at the Oceanside train station.  Credit: Newsday / John Paraskevas; Howard Simmons

They were hard to miss. In the second-to-last-car of the 7:49 a.m. train out of Oceanside, “The Train Girls,” as they called themselves, could easily take up both a four-seater and the adjacent five-seater — and often would spill to a few other rows as well.

As others joined the commuting ranks along the Long Island Rail Road’s Long Beach line, the group grew — eventually including about a dozen women. Over more than 25 years, the Train Girls provided the onboard entertainment for some commuters. For others, they were the reason to move to a different train car.

“We were a little loud,” said Linda Ficano, 62, of Oceanside, whose favorite LIRR memory involves Mary Musto — a particularly boisterous Train Girl — trying to discreetly share a personal story that she preferred not get back to her husband.

Although their friendships were forged inside an electric train car, the bonds the commuting clique formed over almost three decades extend far beyond the rush hours. Through weddings, births and funerals, the Train Girls became as close as sisters.

Although most no longer regularly ride the LIRR, eight of the Train Girls — whose collective commuting careers totaled well over 200 years — recently reunited at the Oceanside station to celebrate a journey that is unlikely to be replicated in the digital age.

"I truly believe this will never happen again, because … now everybody is like this on the train,” Ficano said, mimicking a person buried in a smartphone. “People don't engage anymore. And it's sad that this is going to be lost. Because, that's how we met, but we created such a bond now, train aside."

Although each woman has a different story about how she came to join the group, many point to Judy Moran as the nucleus. It was Moran who struck up a conversation with Ficano aboard a morning train in 1990. Three years later, Musto was walking to her Weidner Avenue home from the train station in a snowstorm when Moran, who lived on the same street, stopped to offer her a ride.

“I couldn’t thank her enough. I was probably in high-heeled shoes,” said Musto, 58, who began regularly riding to and from the train with Moran. “We were friends from that day on, and never stopped.”

“These girls mean so much to me,” Musto added. “It's the best move I ever made — walking back and forth on Weidner Ave."

Over the years, the friendly ladies welcomed more and more people into their circle — all of them easing the stresses of their commutes with conversation, gossip and laughter during their 43-minute ride to Penn Station, not counting delays. Moran called it a daily “therapy session on a train.”

“The people around us, they would act like they were annoyed. But they knew everything about us. They knew, ‘Oh, so-and-so just had a baby.’ They lived vicariously through our stories,” said Joann DiMaggio, 58, of Lynbrook. “I used to say we were ‘The View’ way before there was ‘The View.’”

Greeting the Train Girls most mornings and checking their tickets, was LIRR conductor Lou DeBiase.

“I would introduce myself as I went through collecting tickets. I’d see the same people every day and get to know their names … I remember the group — Linda and Judy and Kathie … They used to talk about their kids, and so on, and so forth,” said DeBiase, 65, who has encountered more than a little cynicism about customer relations in his 19 years working for the railroad. “They said when I came along, I wouldn’t like the customers. But I like the customers. I like people.”

And the women liked him — many of them greeting him with a warm “Louie!” as he’d come through the train door, ticket punch in hand.

“He was a very friendly and warm person. He was just like a family member,” said Kathie Parise, 66, who commuted on the LIRR for more than 40 years. She said having her friends by her side during much of that time helped “make the train ride go fast.”

“If we got stuck somewhere, we had the buddy system,” Parise said. “It always helped to have someone.”

The women recalled that they weren’t the only commuting cliques on their usual train. They talked of fellow passengers regularly taking cardboard poster ads off the train walls to use as card tables. Rose Quaranto recalled that one of the men “always lost.”

“And one day, he won. He got so excited, he grabbed my hand and we stood up and we did a Lindy on the train,” Quaranto said, referring to a type of jitterbug dance. “I'll never forget that."

As the women grew closer together, inevitably their revelry extended beyond the train. There were Tuesday night card games hosted by Monique Guyonarch at her Long Beach home. There were sleepovers. There were Oscar parties with red carpets and ball gowns. There was a girls trip to Ireland. There was something called a “Bringing Sexy Back Party” that involved taking glamour photos.

When Musto was diagnosed with a brain tumor years ago, the women organized a benefit banquet to help cover her medical bills.

There was the time when Moran and her first husband, Tom, won VIP tickets to see Billy Joel at Madison Square Garden on New Year's Eve 1999. Preying on Moran’s Y2K fears, the women persuaded her to ring in the holiday with them instead.

“They told us, ‘Don’t go. They’re going to blow up the world in 2000,'” Moran said, recalling watching the concert instead on a small TV screen in Cookie Paczkowski’s kitchen instead. “Tommy and I got into bed that night and we went, ‘We should have went to see Billy Joel.’”

There was the time they went to see "Les Miserables" on Broadway. Ficano threw her uncomfortable shoes in an LIRR station trash can that night. Musto and Moran fell asleep during the show.

“Drool was coming out of our mouths,” said Musto who, having turned 55 last week, is the youngest of the group.

Quaranto, who will be 90 this year, is the oldest, but she attests to being every bit as much a "girl" as the rest of them.

“They were much younger than I am. And they went out to these dances — and I went right along with them,” Quaranto said.

With every commuter pass that was purchased, used up and tossed away, another month passed. The women went from attending their children’s Sweet 16 parties to attending children’s weddings. Musto, who was in her 20s when she first began riding the train with her friends, just learned she’s about to become a grandmother. There have been children born, and lost, over their years together.

Paczkowski recalled that her fertility came in handy. “I drove everybody after the parties home, because I was the only one that was sober,” she said.

The women found comfort in one another, and in their vinyl train seats, during difficult times. Ficano recalled their usually uproarious train conversations being replaced with “very, very solemn ones” in the days following the Sept. 11, 2001, terror attacks. Several of the women suffered substantial damage to their homes in 2012’s superstorm Sandy, which temporarily knocked out the LIRR's Long Beach line. “I remember I couldn’t wait for the LIRR to run again, so I could be warm,” Ficano said

The train ride that brought the women closest together was also the most difficult. On a morning in April 2002, Moran, then Judy Rudnic, boarded her morning train at Oceanside with some troubling news.

“When she got on the train she said, 'You know, Tommy never came home last night and I can't get in touch with him,’” Ficano recalled. “And I just had this sinking feeling in my stomach."

Shortly after pulling away from Valley Stream, Moran got the call. “They found him in the office,” Ficano said.

Moran’s husband had been found dead in his office of an apparent heart attack. As the train seemed to crawl toward Manhattan, Moran’s onboard support system sprang into action — enveloping her with comforting hugs, offers of tissues and making calls to children’s schools and to relatives. When they arrived at Penn Station, Ficano and another commuting friend, Judy Keith, ditched their jobs and helped contact authorities who put the fraught Moran in a wheelchair and checked her vitals.

Feeling too “undone” to ride the train back home, Moran got a police escort home to Oceanside — Ficano and Keith by her side. Waiting for her at home when she arrived was Musto.

The Train Girls stayed close throughout the ordeal. Ficano would bring pizza to Moran’s home every Friday night for her three children. When Moran was ready to return to work, her friends waited for her at the Oceanside station parking lot to walk with her onto the train.

“Even at the funeral, the priest said, ‘Judy has the support of all her train friends.’ Everybody knew who they were,” Moran said. “I tell you, those girls were my anchor … I wouldn’t have gotten through it without them.”

Through the years, the Train Girls shrunk in size, as some changed jobs, moved or retired. With Parise leaving her job last month, only one "Girl" remains on the train — Moran.

“It feels sad that we’re getting older,” said Moran, who now lives in Long Beach and has been commuting on the LIRR since she was 17. “But I still have them.”

Although their daily get-togethers on the Long Beach branch have come to an end, the women remain as close as ever — texting, talking and getting together for special events. Ficano, who retired in December, recently reached out to Moran.

“I said, ‘It’s been a while. I haven’t seen you. We should get together. She took it a step further. She said, ‘We have a lot to celebrate. We have birthdays. We have retirements. We have new homes. Let’s have an LIRR reunion,’” Ficano said. “I said, ‘Great idea.’ And she reached out to everyone, and everybody could do it.”

At the tail end of the evening rush hour on June 14, eight of the Train Girls reunited at the Oceanside LIRR station before going out to dinner. It was the first time in years so many of the women had shared a train platform together. The women quickly began reminiscing, laughing and teasing one another.

Nearby, a few other commuters, presumably awaiting the 7:59 p.m. to Penn Station, sat quietly on benches, gazing into their phone screens.

Ficano offered advice for them and other riders.

“Look up. Smile at each other. Say hello,” she said. “You might just be missing out on your next best friend.”

On the railroad to friendship

‘The Train Girls’ have spent well over 200 years riding the Long Island Rail Road, forging friendships along the way.