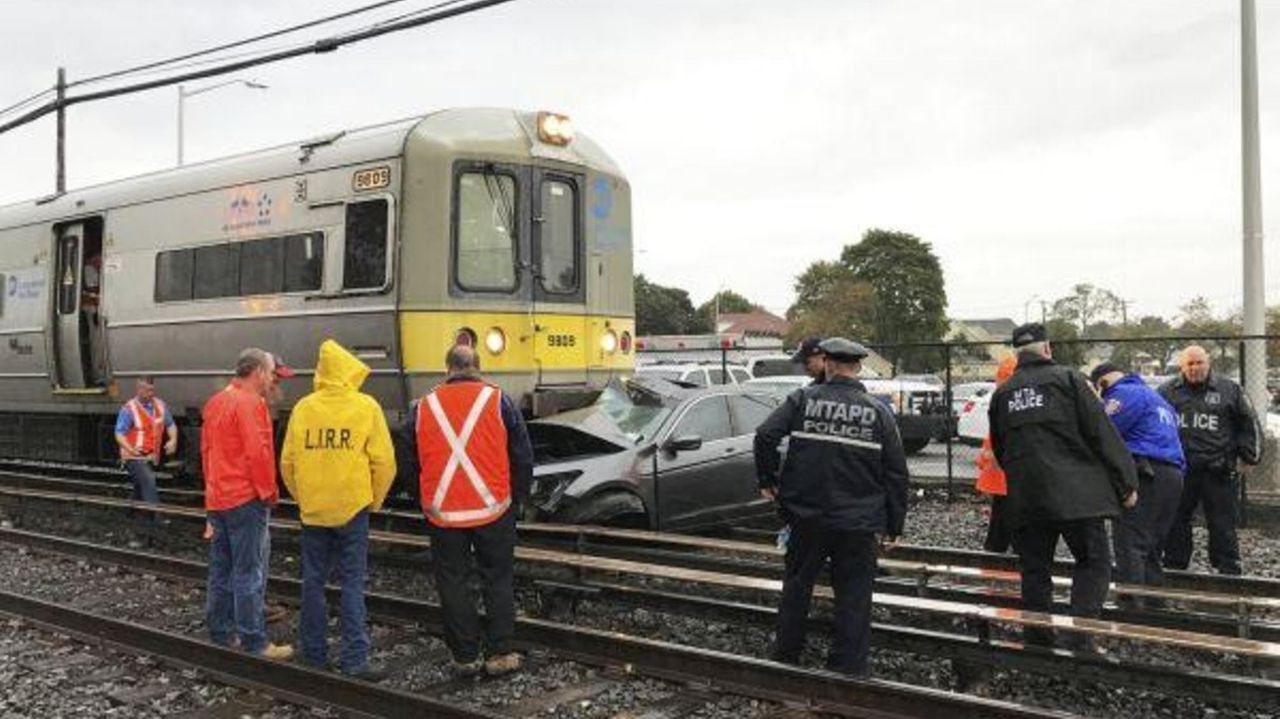 Service on the Ronkonkoma line of the Long Island Rail Road was suspended east of Hicksville for about 90 minutes on Tuesday, Oct. 24, 2017, when a train struck an unoccupied car on the tracks near Bethpage, the railroad said. The driver, Hugh James of Copiague, who said he is an Uber driver, had gotten out of the car before it was hit, and there were no injuries, the railroad said. Credit: News 12 Long Island

The driver of a car that got stuck on the LIRR tracks Tuesday morning near Bethpage got out just before the vehicle was hit, the railroad said.

The westbound 6:57 a.m. Long Island Rail Road train from Farmingdale struck the vehicle at the Broadway crossing, east of the Bethpage station, suspending Ronkonkoma branch service east of Hicksville for about 90 minutes, the railroad said. There were no injuries.

Police officers for the Metropolitan Transportation Authority issued the driver a summons for obstructing a railroad crossing, the authority said.

The driver, Hugh James of Copiague, said he is an Uber driver and was crossing the tracks on his way to pick up his first fare of the day.

“Normally, when I reach the tracks I slow down, and when I hit the gas to go across the tracks it [the car] wouldn’t move,” James said.

He said a part may have fallen from the bottom of his car, a four-door Honda Accord, or there might have been debris or an object on the tracks.

A passer-by tried to push the car while he rocked it back and forth from drive to reverse, he said, but to no avail. He got on his hands and knees to look under the vehicle but could not see clearly, he said.

“I tried to signal the train, but he could not see me so I cleared the area and the car was hit,” James said.

“I was a little shaken up from all that,” he added. “I was in a state of shock.”

Though the MTA has not finished investigating, it said that its preliminary findings did not suggest there was any debris on the track that could have caused the vehicle to get stuck.

The crash was reported on the LIRR’s website at 7:06 a.m. and service was suspended east of Hicksville, the website said.

The Ronkonkoma branch carries about 10 percent of the railroad’s daily riders.

Separately, the railroad reported a delay on the Babylon branch: the 6:13 a.m. train from Massapequa Park to Penn Station because of debris on the tracks. The LIRR website did not specify the location of the debris.

There were also a few delays on other branches because of slippery conditions caused by wet, crushed leaves on the rails, the LIRR said.

With Joan Gralla and Jim Staubitser