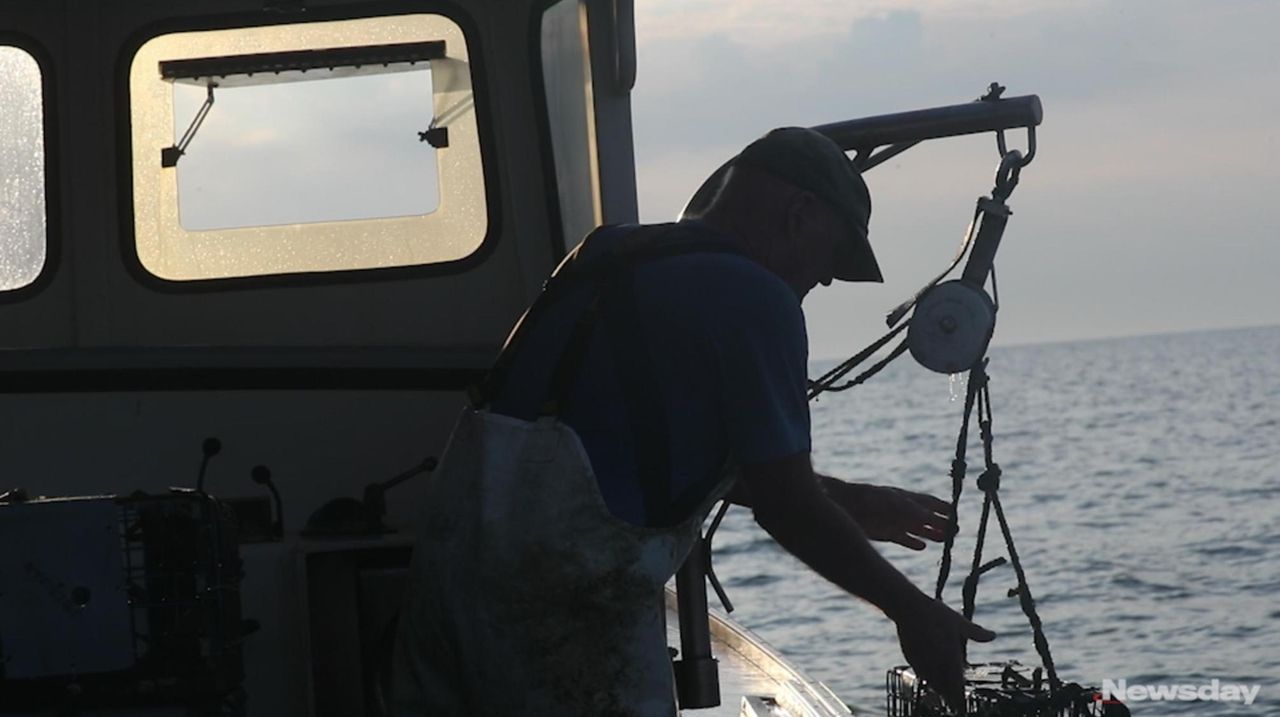 John German is one of the last of the lobstermen on Long Island.  Credit: Randee Daddona

These days, Long Island lobstermen catch everything but lobster.

John German hunted the delectable red crustacean for five decades. But as he motored his 40-foot boat, the Suzanne Marie, out of Mount Sinai Harbor at dawn Wednesday, he wasn't looking for lobster. He was fishing for conch, a spiral-shelled mollusk beloved in Asia.

The lobsters are nearly gone — and with them, the $100 million a year that they brought to Long Island. During lobstering's heyday, in the '80s and '90s, German operated two boats with a dozen workers who set 5,000 traps. His son captained one boat and his two girls helped out in the summer.

Last week, German headed out alone into the sun-spangled waters of Long Island Sound. From the wheelhouse, he turned his face to the northeast and gunned the old engine. Soon enough, he was four miles out and the sun rose over a watery seascape that was barren as far as the eye could see. The Suzanne Marie was the only fishing boat around, a sign of the times.

"Now it's just me and Armstrong," he said, smiling as he flexed his right arm.

German, 71, is one of the last of the Long Island lobstermen, a group that once numbered as many as 700 but now counts only about a dozen members. The rough ride has been blamed on mostly warming waters and what folks call "the die-off," the death of millions of lobsters in 1999 that lobstermen attribute to a concentration of mosquito insecticide that made its way into the sea.

A signature industry, one passed from generation to generation, was brought to its knees.

German had hoped his son, John, would take over his operation. Today, John is a firefighter.

Pete Ringen gave the keys to his boat to his son, Pete Jr. — in 1996. When the die-off came three years later, Pete Jr. tried to hang on for a couple of years. But with a wife and three kids, he eventually moved on to become a steamfitter.
Other lobstermen went into construction or trucking. Some moved to Maine, where they could still find lobsters.

Ringen, 77, still goes out lobstering every 10 days or so. Last week, in one trip, he pulled in about 50 lobsters. The rest of the time he traps fish.

He knows he and his fellow lobstermen, many who are senior citizens, are a dying breed.

The die-off left Mike Craig without a career.

"It was devastating," said Craig, 57, of Miller Place. "Here you are making a living, living a lifestyle — and then it's gone."

"It's the only way I could stay on the water," he said.

During the good times, Long Island held its own against other top lobstering places such as Maine and Massachusetts, said Bob Bayer, who heads the Lobster Institute at the University of Maine.

The numbers tell the story: In 1996, New York lobstermen, most on Long Island, pulled in 9.4 million pounds of lobster. By 2006, they were hauling in 1.2 million pounds. Another decade later, in 2016, it was 218,000 pounds, according to the Atlantic States Marine Fisheries Commission.

In the old days, German would see a dozen or so lobster boats pull out of Mount Sinai Harbor every day; now, it's two. Fishermen competed fiercely for spots to place their traps. If a lobsterman placed his traps too close to another fellow's, there could be a fight. Or the offender might find his buoys stuffed inside his traps.

German slowed the Suzanne Marie alongside a yellow buoy, one of his markers. He hooked the buoy line and threaded it into a hydraulic winder that hauled in a line of seven traps, one at a time. Over the years, lines have pulled off two of the fingers on his left hand. He had them sewn back on.

As he brought up each trap, German pulled out crabs and tossed them back into the water. He tossed the conchs into a bushel basket.

"I'd rather be lobstering," he said.

Conchs may have saved his fishing career, but they are far less lucrative. And quite simply, he doesn't like them.

"They have no personality," he said of the mollusk that tucks itself in a seashell. "You pull a lobster out of the water and they look at you. Their antennas are waving. They have personality."

A handful of Island lobstermen hold out hope.

Ringen made some decent money in 2016 when there was a bump in the lobster population. Now, he waits every year for the peak season to see if the number swells. He is hoping it comes next month.

Back in 2016, a bunch of fishermen jumped back into lobstering, hoping for a resurgence. Even Mike Craig threw in some traps.

The high hopes, Ringen said, turned into something else.

It was a short day of fishing for German. He had a doctor's appointment at the veterans hospital to deal with his foot problems. He has had three hernias over the years, the toll of a lifetime of strenuous labor on his feet.

Before he headed back to shore, he took in the scene around him.

"Who else has all this?" he said with his arms stretched out.

He scrubbed and hosed down the inside of the Suzanne Marie before he turned it homeward. Then, at the wheel, he seemed at peace, joyful and relaxed, just a guy out with his boat.

German started working with the water, like so many other fishermen, by clamming as a kid. He was born and raised in Brookhaven Hamlet and lives there still.

"I'll probably die there," he said.

But then he corrected himself.

"I'll probably die on this boat."