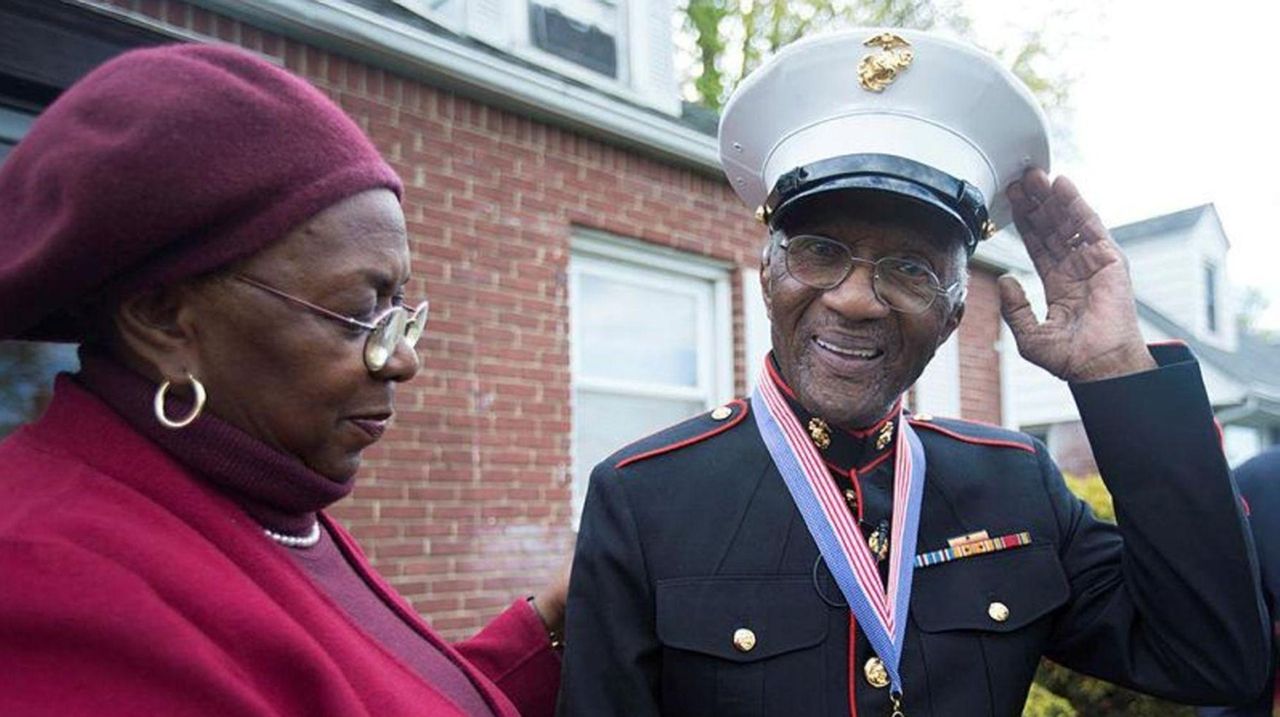 Vincent Long, 91, was presented with a Marine Corps dress blue uniform at his Hempstead home on Wednesday, May 3, 2017, and received the Mayor's Award at a ceremony at Hempstead City Hall. Long, a retired MTA train engineer, served in a segregated unit during World War II, at a time when few black Marines were issued dress uniforms. Credit: Newsday / Raychel Brightman

Wearing a crisp new Marine Corps “dress blues” uniform he never had during his time as a World War II draftee, Vincent Long stepped into his Hempstead living room and into the hearts of several of his countrymen.

“This is an amazing thing to see,” said Evan Mitchell, 18, a Marine Corps-bound Mt. Sinai High School senior, who took time off from school to attend.

On Wednesday, nearly two dozen well-wishers assembled at Long’s home in Hempstead to watch as he received a uniform he had long wished for, but never owned for himself.

Long, 91, a retired MTA train engineer, was one of the Montford Point Marines, black men who served in segregated units and were relegated to mostly menial tasks during WWII. Although they were not explicitly prohibited from having them, few were ever issued dress blues. Montford Point was a segregated section at Camp Lejeune, North Carolina.

“While I was in the service, I never knew any of the black Marines who had one, and I always thought you had to be at least a corporal,” Long said. “But I finally got recognition.”

“I see young Marines in blues now,” Long said. “But when I was in, all we saw were khakis.”

Long, as were almost all of the Montford Point Marines, was assigned to mostly menial duties during his 1943 to 1946 enlistment when he served as a private first class - duties that mostly barred black Marines from career-advancing combat roles and kept them out of the ceremonial spotlight.

“We had no socials or anything like that,” Long said of his segregated units. “And there were no black officers, only white ones.”

Long finally got the uniform he wanted after mentioning his wish to a local organizer of Honor Flight, which regularly hosts veterans on trips to see the war memorials of Washington D.C.

The organizer relayed the request to Frank Tauches, a retired Marine Reserve colonel and former Garden City mayor, who had the uniform tailored for Long.

The gathering at Long’s home drew an assortment of well-wishers, including Chris Levy, a former Army Ranger whose legs were amputated in an explosion in Afghanistan, and fellow Montford Point Marine Richard Warren, of Roosevelt, who served on the same Pacific Ocean island of Saipan a year after Long served there.

Mitchell, who is white, said he learned of the Montford Point Marines from a recruiter, and came to the gathering to gain a deeper appreciation of the military service he is about to join.

“They fought for their country and were denied when they came home,” Mitchell said. “I’m very proud of Vincent Long.”