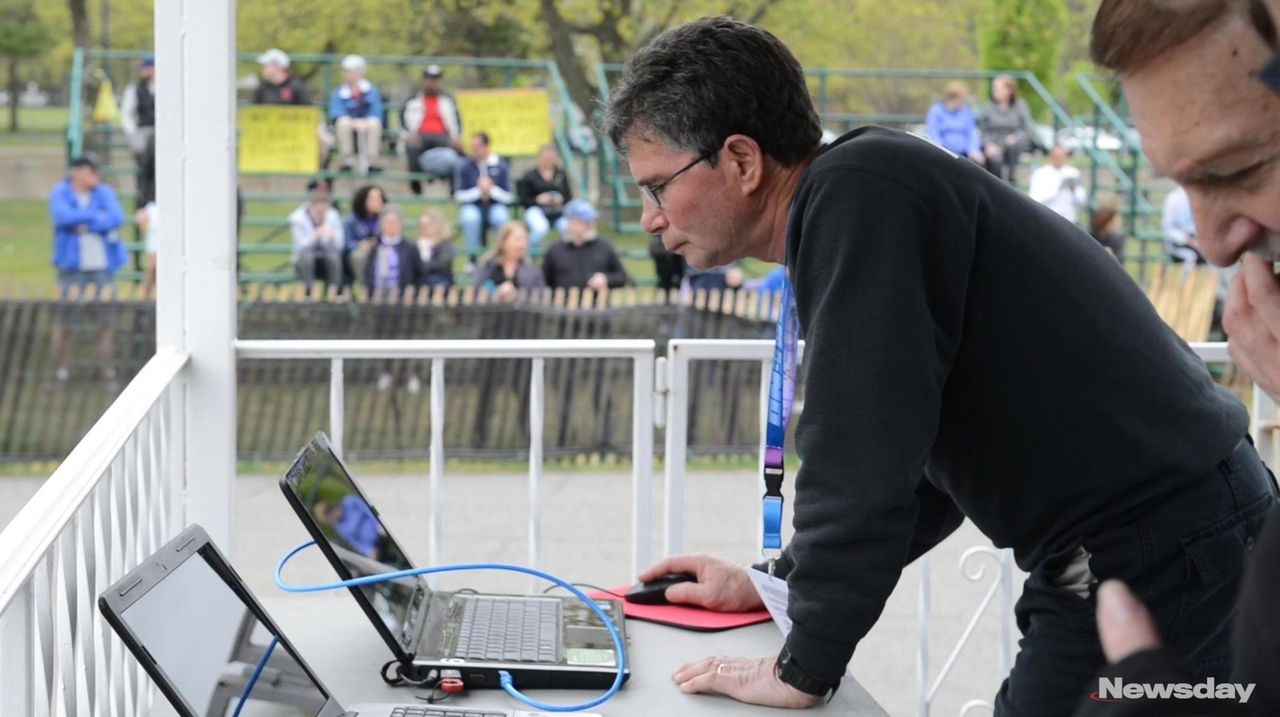 On Sunday May 6, 2018, during the Long Island Marathon at Eisenhower Park, David Katz talked about how he was choosen to be the offical course measurer for the Summer Olympics in Tokyo in 2020. Credit: Daniel Brennan

When he retired as a high school science teacher after 36 years, David Katz clearly had a lot of mileage left in him.

Just ask the runners who compete in the races that he helps manage — which include events from the New York State Park Summer Run Series to the Olympic Games. They’ll tell you that Katz, now 65, is simply the best at what he does.

You could say that he has found a second wind in his second career.

As a technical race director of road races and track meets — the person who ensures that courses are accurately measured and managed, in terms of water stops, volunteers, mile markers, etc., and the other things runners need — Katz’s services are in demand worldwide.

Moreover, seven years after he retired from Port Washington High School, he is still striving to improve — in every aspect of his life.

In the past year alone, he has reeled off an impressive list of credits. Katz was recently appointed as the chairman for the USA Track & Field Road Running Technical Council, which oversees all course measuring for sanctioned road races in the United States. He is also on the technical committee of the International Association of Athletics Federations — the world’s governing body for the sports of track and field. And in March, he was appointed road course measurer for the 2020 Olympic Games in Tokyo — the third time he will be in charge of ensuring that the Olympic courses for the 26.2-mile marathon, and the 20 kilometer and 50k race walks, are accurately measured. This in addition to his longtime jobs as finish-line coordinator of the New York City Marathon and technical director for the Long Island Marathon.

In pursuit of his far-flung projects, Katz — who has residences in Port Washington and Greenport — estimates he logged 160,000 air miles last year.

With still-boyish looks and a full head of hair, Katz defies age. “In a lot of ways,” he admits, “I’m still a kid. I’m a goofy kid riding my bike.”

While not a runner himself, Katz, who grew up in the Coney Island section of Brooklyn, has established an international reputation in the sport; one that, as his recent credits suggest, just keeps growing.

“He’s our technical consigliere at the finish line,” says Peter Ciaccia, president of the New York Road Runners, and race director of the TCS New York City Marathon. “I would say on the technical side of road racing, he’s the pinnacle. Only a few guys are doing what he’s doing at the same level.”

At the NYC Marathon, that means making sure not only that the finish line — including the tape and dignitaries holding it — are in place for the overall male and female winners, but also that, in the thick of the finish, when an average of 300 runners per minute are crossing the line in Central Park, there are no traffic jams.

Katz has a similar job at the Long Island Marathon, where his bright red trailer, parked by the finish line in Eisenhower Park, is a familiar sight the first Sunday in May. The truck will be in various state parks this summer, as Katz is the technical director for the New York State Parks Summer Run Series, which started in Heckscher State Park on June 11 and continues on Mondays at various Long Island parks, concluding Aug. 6 at Jones Beach.

For local competitors, having Katz involved in a race is a sort of Good Housekeeping Seal of running approval.

“You know the course is going to be accurately measured and that the race is going to go off on time if he’s there,” says Peter Hawkins of Malverne, the 25-time wheelchair winner of the Long Island Marathon.

As Hawkins is often the first person to cross the finish line of the full marathon in Eisenhower Park — which on race mornings is crowded with spectators and finishers from the half marathon and 10k (6.2-mile) races that are held concurrently — Katz is a welcome sight in the last few 100 yards of the race, pointing him to the correct finish chute. “It’s always good to have someone directing you near the end,” says Hawkins. “And with David, I know he’s on top of it. He’s a detail guy.”

The details are what have fascinated Katz since he first made the leap from being a fan of running and track and field to being the man responsible for making sure that courses were accurately measured and the events properly organized.

That was in the mid-1970s, when the Port Washington school budget was rejected by voters, and the school went on austerity. A parents group hoping to preserve local school sports organized a fundraising run on Thanksgiving Day in 1976. Katz volunteered to be a part of it. Afterward, Katz pondered the question of how to improve the technical aspects of the race. “How could we do this better?” he asked himself. He got the answers from Ted Corbitt, the man he calls his mentor. Corbitt, a 1952 U.S. Olympic marathoner and first president of the New York Road Runners, helped develop course management as a science; and taught the science teacher from Port Washington some of the tricks of the discipline.

By the early 1980s, Katz was the co-director of the Port Washington Thanksgiving Day run, an event that continues to this day.

As running boomed and races began popping up all over Long Island, Katz’s skills were in high demand — despite his personality, which he admits now, was then abrasive and combative. “I know I’m not a flavor everybody likes,” Katz says. “But I’ve matured, I’ve gotten better.” He credits the influence of his wife, Frances Walton, to whom he’s been married since 2002. “She’s taught me how to handle situations better.” (Katz has two grown children from a previous marriage, Joshua, 33, and Allison, 34.)

In the world of elite racing and track and field, those situations can be serious: A wrong turn on an errantly marked or improperly measured course in a major professional race could cost a competitor thousands of dollars in prize money — or an Olympic or World Championship medal. Ensuring that doesn’t happen is part of Katz’s responsibility.

Jakob Larsen, the director of the Danish Athletics Federation, who worked with Katz when his federation hosted the World Half Marathon Championships in 2014, believes that at heart, he is still a teacher. “I think it shines through all the time,” says Larsen. “He tries to make everyone better at what they do. And even the best teachers are not popular with all the students.”

He’s also trying to constantly improve and refine his own skills and technology. In the late 1990s, Katz’s races were the first in the metropolitan area to use the computerized timing chips that are now common (originally, they were clipped to a runner’s shoe; now they are embedded in the race numbers worn by every competitor). And even in the age of Google Maps, he is still searching for a better way to measure courses. “GPS is not that accurate,” he says. “The IAAF is looking at more high-tech ways to achieve accuracy in course measurement.”

Katz, not surprisingly, is part of the IAAF committee that is searching for that better way. And this, says Paul Hardy, the IAAF’s competition director, is part of what impresses him most about Katz. “I do think he has actually raised his game since retiring as a full-time teacher,” says Hardy. “He understands that the sport must change, and always looks for ways in which the sport can evolve and innovate.”

Speaking at his induction to the USA Track & Field Hall of fame this past December in Columbus, Ohio, Katz alluded to his own efforts at personal as well as professional growth in later life. “I can’t turn back the clock,” he said. “But I can definitely change the future.”