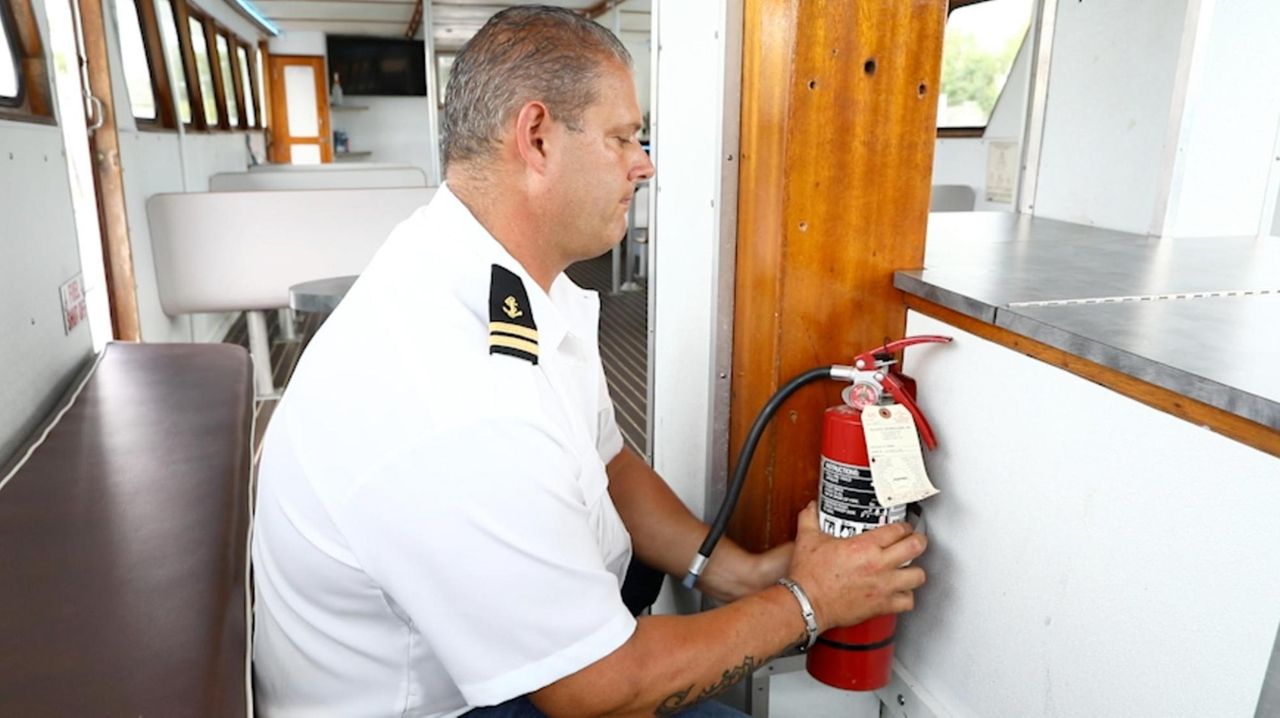 Captains who operate Long Island's fishing charters and other passenger boats are talking a lot about government regulations these days — conversations driven by tragedy, a dive boat fire off the Southern California coast that took dozens of lives.

They have strong opinions.

Capt. Joseph McBride is firm that he and his fellow operators follow the rules — and he points to the Island's safe waters as proof. Capt. Michael Wasserman fully expects new regulations will come. Capt. Frank Persico is all about enforcing the existing rules, and Capt. Sean Tortora keeps coming back to the need for more training.

Thirty-three passengers and one crew member died in the California fire, sparked in the early hours of Labor Day by what the boat's designer suspects was a lithium battery charger in the sleeping quarters below deck. Federal investigators who examined the burned-out wreckage have not been able to determine what ignited the fire, The Associated Press reported Friday.

Of the six crew members, one was asleep with the passengers in the main bunk and four were asleep in beds behind the wheelhouse. A worker who had been designated the night watchman had dozed off in the wheelhouse, according to early findings by the National Transportation Safety Board.

Federal regulations, enforced by the Coast Guard, required a night watchman on the boat for the very purpose of detecting a fire early. A criminal investigation is now underway by the Coast Guard, the FBI and the Bureau of Alcohol, Tobacco, Firearms and Explosives.

So far, there has only been speculation about amping up safety requirements. For now, the Coast Guard is simply urging boat operators to check their safety gear, make sure their crews understand their duties in an emergency and reduce potential hazards from things like lithium batteries and power strips.

But the Long Islanders are thinking further ahead: Maybe the government will decide there should be more escape hatches or better emergency lighting for bunk decks. A mandate could come down for more crew members on overnight trips.

Time will tell, said the captains, who all come from different sides of the business.

Persico does dive trips, Wasserman fishing runs and dinner cruises. Both leave out of Freeport. McBride has a charterboat in Montauk and Tortora is a marine consultant.

“It depends on what the investigation finds,” Persico said of what he thinks is coming down the line. “All of us are trying to figure it out.”

Often, Tortora said, catastrophe is what it takes to make the maritime industry improve.

“All of our regulations are written in blood,” he said.

Nearly 70 years ago, the sinking of a 42-foot partyboat off Montauk changed the rules of boating across the country.

The Pelican set out on Sept. 1, 1951, with 60 passengers and crew members — double its capacity. High waves flipped the boat.

At the time, the Coast Guard inspected only boats weighing 15 gross tons or more; the Pelican came in at 14 gross tons.

Five years after the disaster, Congress mandated inspections for all boats hired out for more than six passengers.

Today, the Island has 175 boats for hire that have to be inspected: 95 can carry from six to 150 paying passengers; 10 have capacity for 49; and 60 are ferries and other large vessels such as tour boats and some charter fishing vessels, Coast Guard figures show. The dive boat in California, a 75-footer called the Conception, had a capacity of 46.

Far more of Long Island's boats can take up to six paying passengers. And, by law, they don't have to be inspected, though they do have to have safety gear — fire extinguishers and life jackets, for example.

The Coast Guard didn't have figures on what the captains call "six-pack" boats, but the captains put the number at several hundred.

Persico thinks the lack of inspections tempts operators to skimp on safety.

"The problem with uninspected boats is that they are uninspected," he said.

McBride, on the other hand, makes the case that operators know better than to cut corners because the Coast Guard makes unplanned inspections on the water.

"They all know they are liable to be stopped any day," said McBride, who is the legislative representative for the Montauk Boatmen and Captains Association. "They adhere to the rules."

Boats that carry more than six passengers get a close look every year, according to Coast Guard regulations.

Inspectors do a top-to-bottom review of the machinery as well as the lifesaving, firefighting, navigation and radio equipment. And they test the crew's firefighting skills.

The inspector may ask the crew to respond to a fire in the engine, said Wasserman, who runs fishing trips and dinner cruises.

Crew members bring out the fire extinguishers and fire hoses. The inspector watches how both the workers and the equipment perform, he said. Do the hoses push through enough water to beat back the flames? How well does the crew direct passengers away from the fire?

"We will maneuver the boat as if it were a real-life fire," Wasserman said. "I would make calls as to who does what, whether it's handling extinguishers or hoses."

Across the board, Tortora believes captains and crews need better firefighting training.

Right now, the Coast Guard mandates one firefighting course for captains and crews of boats of unlimited tonnage, such as cargo and container boats, said Tortora, who operates the consulting firm Long Island Maritime in East Islip.

The course's two parts add up to 48 hours — 40 hours in the classroom and eight hours of hands-on experience at one of the agency's training centers.

Captains and officers, such as pilots and engineers, also have to take a second firefighting course — again 40 hours in the classroom and eight hours of hands-on experience but geared toward how to manage crew members fighting a fire.

Firefighting training generally is touched on in the licensing coursework for captains of boats under 100 tons, which are most on the Island, but the Coast Guard doesn't require any for most crew members, he said.

Many firefighting skills, Tortora said, are usually learned on the job.

"I prefer more safety," said Tortora, whose specialties include marine fire safety and firefighting. "They should have full training on firefighting."

What Tortora wants is 24 hours of firefighting training for captains and crews of boats under 100 tons — 16 hours in the classroom and eight hours of hands-on learning.

The coursework, he said, should start with the basics of fire science, including how a fire starts and spreads. Other points that would be covered: what are the most common causes of boat fires and how to use fire extinguishers, smoke alarms and the fire-suppression system in the engine area, he said.

At a training center, Tortora said, mariners should fight a fire in the engine room or put out a small wood fire.

"They would learn by crawling around a smoke-filled space, and going up and down ladders," he said.

Persico does firefighting drills every other month or so with the two crew members on his 36-foot dive boat, the Sea Hawk.

"It's basically knowing where everything is, and how it works," said the captain, sitting on his boat docked in Woodcleft Canal in Freeport.

Persico ticks off the Sea Hawk's big safety equipment. On deck are two fire extinguishers as well as one in the pilot house and one in the engine room. A cabinet below the seats holds 20 life jackets, a dozen more than he needs for the eight passengers he usually takes out.

A small plastic box holds emergency flares. Hanging above the cabin is an emergency life ring, also required. And there's a life raft on the roof of the boat, designed to release if the boat sinks.

Then he circles back to firefighting training. In the maritime community, the longtimers school the new workers.

Wasserman has two boats that he sends out 20 to 30 times a year on overnight fishing runs, many in the winter when the fish are farther out in the water. Sometimes, the boats go out up to 100 miles.

His Freeport Gem is similar to the California boat that caught fire — 80 feet long, a capacity of 140 passengers. He usually takes about 30 passengers on the long trips.

Boats that make overnight runs, according Coast Guard regulations, have their own rules and regulations: Bunk rooms require smoke detectors, for example. The captain and crew can work no more than 12 hours straight. And a crew member must be on deck overnight, watching out for risks like fire.

The NTSB found that the Conception's night watch had fallen asleep. Investigators expect to wrap up their work sometime late next year.

Senate Minority Leader Chuck Schumer (D-N.Y.) is calling for a prompt and thorough investigation and pledges to do what it takes to make boats safer.

“Whether a partyboat, charterboat or dive boat, one thing is clear: safety must come first," Schumer said in a statement. "Should these investigations unearth safety shortcomings that warrant legislative or regulatory action, I will work in a bipartisan way to make any changes needed to increase boating safety."

Wasserman is in wait-and-see mode, too. He isn't sure what changes are coming, but he has some ideas — maybe more crew members on night watch, maybe more safety gear, maybe different alarm systems.

"Thirty-plus people died," Wasserman said. "Now, we have to stop it from happening again."