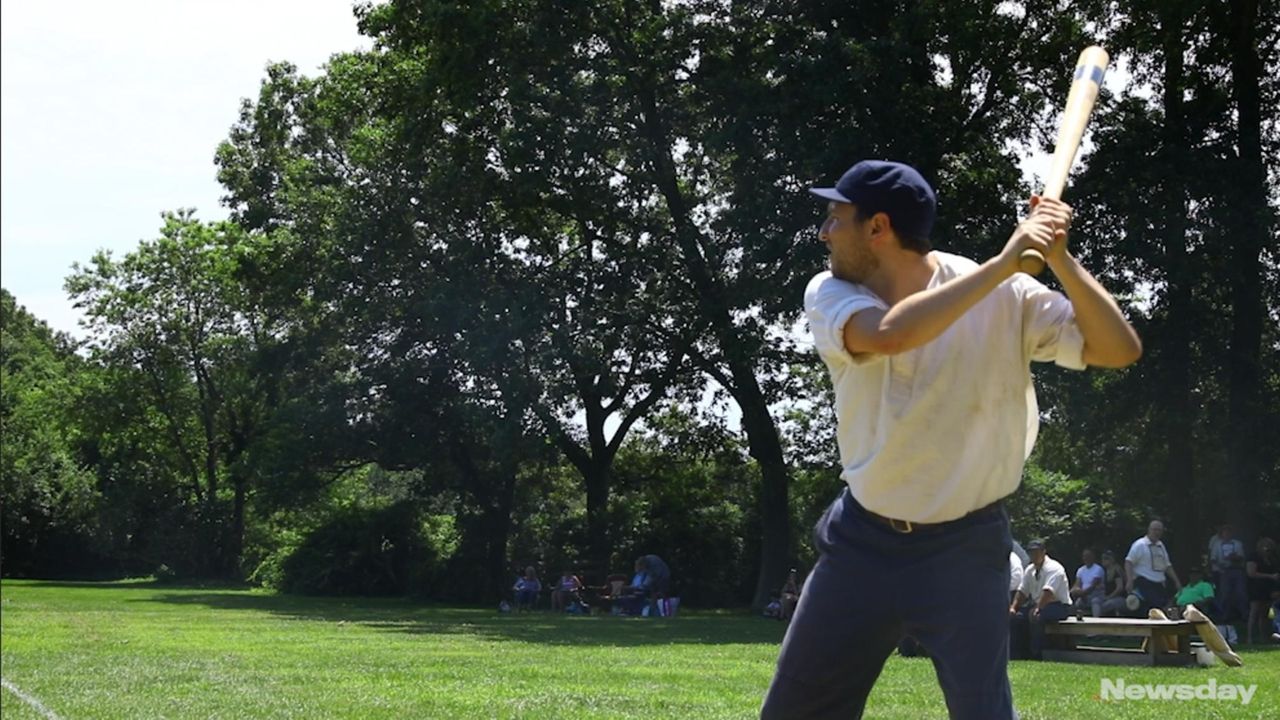 The Brooklyn Eckfords and Brooklyn Atlantics met up at Old Bethpage Village Restoration on Tuesday, July 4, 2017, for a game of Old Time Base Ball, and fans enoyed seeing the game the way it was played in 1864. Credit: Newsday / Megan Miller

As America celebrated its 241st birthday on Tuesday, it was still 1864 on the baseball field at Old Bethpage Village Restoration.

The Brooklyn Atlantics and the Brooklyn Eckfords faced off in a game of Old Time Base Ball, with 1864 rules, as part of the living history museum’s Independence Day celebration.

From Old Bethpage to Hempstead and Jones Beach, and in Port Jefferson, it was one of many ways communities across Long Island commemorated the Fourth of July.

Old Time Base Ball began at Old Bethpage Village Restoration in 1980, said Gary Monti, who began playing in 1986 and served as umpire, or “referee,” during Tuesday’s game.

Under 1864 rules, the ball is pitched underhand, nobody wears a glove and a ball caught on one bounce is an out. Batters and pitchers are called “strikers” and “bowlers,” while the catcher is “the behind,” Monti said. There are nine innings, with three outs to each side.

Frank Van Zant, a player with the Brooklyn Atlantics, said he has been playing vintage base ball for 20 years, since he first saw the game and “fell in love instantly.”

“I think there’s a great fellowship in the game,” said Van Zant, 56, of Huntington. “It’s competitive, everybody wants to win, but not at the cost of friendships and decorum.”

“Every guy out here is purely [here] for the love of the game,” said Belbol, 50, of Merrick. “There’s no money, there’s no steroids, there’s no fame or fortune. It’s just we love the game and we’re out here to show people what it was like.”

At Jones Beach, multicolored umbrellas packed the shoreline, and the screams and squeals of children as waves crashed could be heard everywhere.

Andres Berrio, of Jersey City, New Jersey, sat close to the water edge’s with his 18-month-old son, Lorenzo, perched on his lap.

“I’ve been going here since I was 10 . . . [and] it’s his first official summer because he can walk now,” Berrio, 32, said of the toddler. Berrio also took a moment to remind Lorenzo that shells are not food.

Elsewhere, lifeguards gathered atop a towering mound of sand to take their annual 3 p.m. July Fourth picture. They whistled and cheered as the American flag billowed behind them.

There were 35 lifeguards watching the beaches Tuesday, compared with the normal 22 to 26, lifeguard Brice Lynch, 31, of Bellmore said. 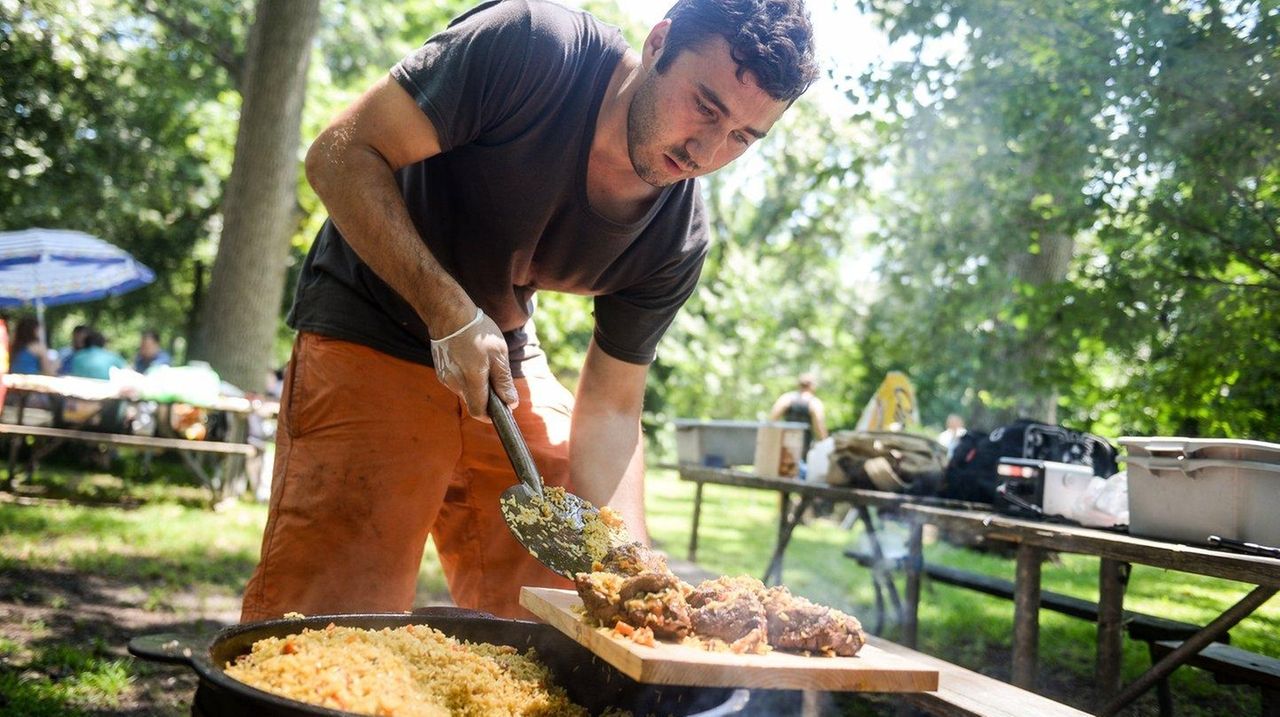 Plov: 'Once you try it, you'll love it forever' Plov is a traditional dish in Central Asian countries, including the former Soviet republics of Uzbekistan, Tajikistan and Kyrgistan, using rice, carrots, beef or lamb, and other ingredients. A Facebook group called American Plovmakers hosted a plov feast during Independence Day celebrations at Hempstead Lake State Park on Tuesday, July 4, 2017. Credit: Steve Pfost

Sherifa Thomas, 35, of Queens, said it was her family’s first time at Jones Beach for July Fourth. Sitting in the sand, she helped her two kids and a niece and nephew dig a hole.

“We’re going to bury people in there,” announced her daughter Syniya, 9.

Syniya’s brother, Liam, 3, clad in a Spiderman bathing suit, only seemed to want to say one thing.

Damir Karimov was alone at Hempstead Lake State Park at 10 a.m. Tuesday, watching over a traditional Kazan pot full of the day’s attraction: a Central Asian dish of lamb, rice, carrots and onions called plov, that Karimov cooked over a wood-fueled stove for three hours.

Karimov, 29, a Tatar-American from Uzbekistan who lives in Brooklyn and runs the Facebook page Americanplovmakers, hosts cookouts featuring the dish on Long Island. On Independence Day, his patrons were immigrant families with a personal connection to the dish.

“It’s the best plov I’ve ever had. . . . This guy knows what he’s doing,” said Aaron Himov, 32, an Uzbek immigrant who’s been living in the United States for 28 years. “Nobody makes it better than the Uzbekistanian people.”

Cultivating a sense of community is among Karimov’s goals for his cookouts.

On “the Fourth of July, we like to go see fireworks, we like to do barbecue, why not do plov?” said Karimov, who used to run an Uzbek restaurant in Brooklyn with his family.

“Happy Fourth of July everyone,” screamed an enthusiastic pipe-smoking Uncle Sam from on top of Grumpy Jack’s Bar and Grill float during Port Jefferson’s annual Fourth of July parade.

Hundreds of people lined up along Main Street to watch the festivities and receive candy and American flags given out by marchers. A diverse group of people attended, coming from overseas, out of state and from right in Port Jefferson.

Daughter and father Rose Broderick, 16, and John Broderick, 50, of Pittsburgh, said they come to Long Island every Fourth of July to visit Rose’s grandparents. “It’s kind of a tradition,” she said.

She said her favorite part of the parade was the procession of old cars, including 1920s Duesenbergs and 1960s Cadillacs.

She and her father also liked the music.

“We don’t have musical groups with firemen in them where we are at, so that’s kind of a nice treat,” said John Broderick.

Fire department members from communities including Mount Sinai, Brentwood, Centereach were out in force during the parade, with a group of firetrucks and ambulances rolling by about once every 10 minutes.

The Fourth of July traditionally is one of the busiest days of the year at Long Island parks, and it didn’t disappoint this year.

“These are the heaviest crowds we’ve seen in three years,” said George Gorman, state parks deputy regional director for Long Island. He estimated his facilities would welcome 250,000 visitors during the day and another 100,000 Tuesday night for fireworks at Jones Beach State Park.

By midmorning, Gorman said, vehicles had backed up 6 miles from the traffic circle at the end of Robert Moses Causeway to Montauk Highway in West Islip.

Wildwood in Wading River had so many visitors that state parks officials closed it to newcomers at 9:45 a.m., while Orient Beach and Sunken Meadow state parks also were closed for part of the day. All had reopened by 4 p.m.

Traffic was light at Jones Beach in Wantagh. “It could be that people were anticipating it would be overcrowded,” Gorman said.