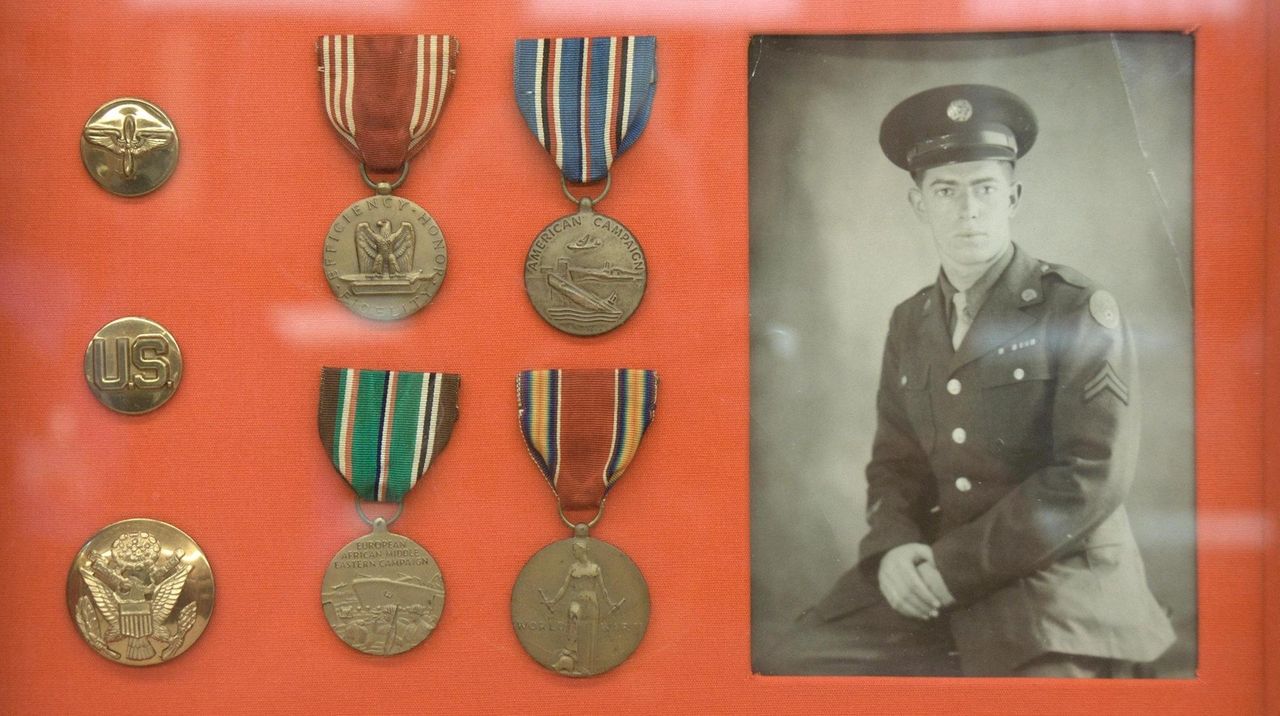 David Wolman, 97, of Centereach, was working as an air traffic controller in England with the U.S. Army during World War II. On May 21, he shared his memories of D-Day. Credit: Newsday / Martin Evans

In 1942, Walter Blum co-captained the track team at Great Neck Junior-Senior High School. He dreamed of competing in the 1944 Summer Olympics in London.

Instead, he arrived in England in May of 1944 as a freshly drafted GI. Two weeks later, he found himself scrambling down a cargo net and into a landing craft bound for the coast of France.

On June 6, 1944, at only 18, Blum found himself fighting in the titanic struggle that changed World War II. Historians would call it the longest day, the largest seaborne invasion in history.

As an amphibious engineering team member, Blum was one of the first Americans to arrive at Utah Beach on that early June day 75 years ago. Now, he is one of a dwindling number of Normandy veterans around the world.

"There were so many dead all over the beach."

“I was just lucky I survived,” said Blum.

D-Day ushered forth the pivotal Allied invasion of northwest Europe, forcing an increasingly beleaguered Nazi Germany to defend a western front as the Soviet Union advanced from the east. Although another 11 months of fighting would remain, the successful Allied push foretold the downfall of the Third Reich.

Beginning in the predawn hours of that leaden day, 5,000 ships streamed across the English Channel toward a heavily fortified 50-mile stretch of exposed beaches. They disgorged some 160,000 American, English and Canadian troops.

Many fell to German machine guns that began firing the moment Allied landing craft opened their protective doors. More than a few drowned far from the beach, pulled under by the weight of their gear. Within hours, more than 4,000 Allied troops were killed, according to the National D-Day Memorial.

Long Island sent its share of men into the fray. Many of those who attended D-Day commemorations a year ago have since died. The few remaining survivors, all past 90, were mere teenagers on that day.

Blum’s task was to clear a path through the maze of explosive mines and metal obstructions designed to trap the Allies at the water’s edge, in range of German guns and mortars fired from bluffs. But with many more obstructions than the engineers could possibly clear, Allied boats often dropped troops far from shore, forcing them to slog hundreds of yards.

To this day, Blum, who still lives in Great Neck, wonders whether his efforts made much of a difference.

“It was hard to see friends floating facedown in the surf, with their blood in the water,” said Blum, whose combat ended a few days later when a mortar's shrapnel shredded his knee. “There were so many dead all over the beach.”

Former Army Cpl. David Wolman of Centereach was a control tower operator for the Eighth Air Force during the invasion. His task was to help keep order as Allied bombers lumbered aloft by the hundreds from England's Thorpe Abbotts airfield.

"My mission was to tell them the runway in use, the cloud formation, how high the clouds were,” Wolman recalled. “And they were lined up. And when we told them they were cleared for takeoff, they all revved their engines up and one at a time they were taking off."

Now 97, he remembers seeing the sky thick with planes as the force launched some 2,200 sorties to hammer Germany’s supply lines and beach fortifications.

"They gathered at least, I’d say, about 400 at a time, B-17s,” Wolman recalled. “Each bomb group had a lead navigator, and they each followed each other and then they would line up in a V formation to cross the Channel.”

On a trip to Normandy on Wednesday, Rep. Thomas Suozzi (D-Glen Cove) plans to visit the graves of 21 soldiers who grew up in his congressional district, died in the invasion and were buried in a nearby military cemetery.

Among the graves: Brig. Gen. Theodore Roosevelt III, the eldest son of the 26th president, who died in France a month after the invasion. Known as Theodore Roosevelt Jr., the only general on D-Day to come ashore with the first wave of troops was awarded the Medal of Honor “for gallantry and intrepidity” that included walking amid gunfire to embolden embattled soldiers. His son, Capt. Quentin Roosevelt II, also landed on D-Day.

In a bipartisan congressional delegation, Suozzi plans to place a handful of soil on the general's grave from his childhood home of Sagamore Hill estate.

“D-Day recognizes the sacrifices of so many,” said Suozzi, who met Monday with D-Day veterans on Long Island. “We have to remember that to be worthy of the sacrifices made on D-Day, we have to have our conversations about politics and government be more noble than they have become.”

D-Day Strategy and the Normandy Invasion

Vietnam veteran John Ribeiro will discuss the military strategy for the Normandy invasion with an engaging PowerPoint presentation. Register in advance. Free.

The museum pulls out the big guns as part of its salute to the 75th anniversary. Head to the museum and you’ll be surrounded by the weapons and operational armor of that era. The days also includes prayer, reflection and commentary. Free.

Survivors recall sights, sounds of D-DayHarry Arlin remembers the icy waters. The bullets flying overhead. And the smell of rotting corpses on the beaches of Normandy.