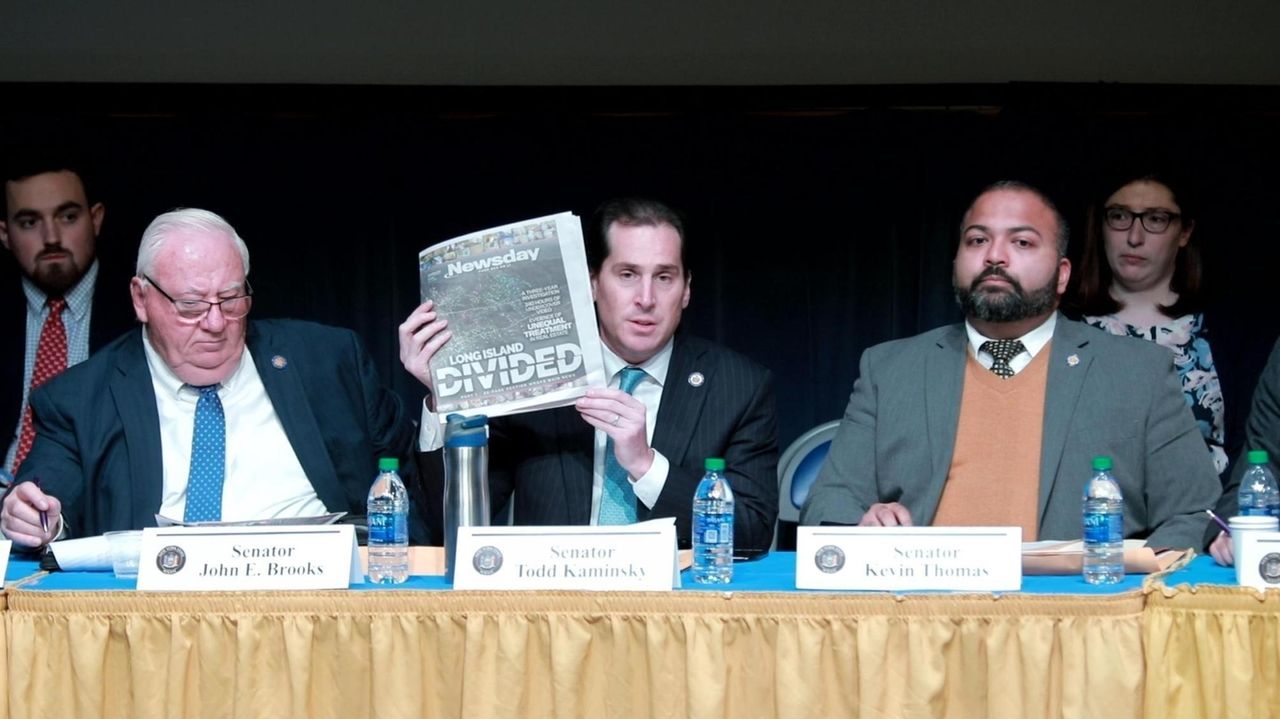 The State Senate will issue subpoenas to up to 67 real estate agents and company representatives to probe allegations of housing discrimination revealed in a recent Newsday report, lawmakers announced Thursday.

Some 68 agents and companies were requested to appear at a Senate hearing Thursday sparked by Newsday’s “Long Island Divided” series. But just one did so.

“The remaining 67 individuals either neglected to respond or outright refused to provide testimony,” Sen. James Skoufis (D-Hudson Valley), chairman of the Senate Committee on Investigations and Government Operations, said midway through the hearing at Hofstra University. “There’s an easy way to go about things and a hard way. So, following today, subpoenas will be served to many of these individuals to compel their testimony.”

It was one of many flashpoints during a five-hour hearing that focused on Newsday report, which found evidence of widespread unequal treatment of minority homebuyers on Long Island. Senators took testimony from local government officials, housing experts, anti-discrimination groups, real estate representatives and the undercover testers Newsday used in its investigation.

Under grilling by senators, M. Ryan Gorman, president and CEO of Realogy Holdings Corp.’s NRT LLC, the nation’s largest residential brokerage company by sales volume, acknowledged the Newsday series showed a “pervasive” problem of discrimination. Asked if the company owed African Americans an apology, Gorman said he personally apologized and vowed the company would review its training of agents nationwide.

"This process has led me to believe we need to have our own training and to augment" state-mandated training, Gorman said. “I think what was uncovered in the Newsday investigation was severely disappointing.”

Senators pressed Gorman on whether real estate agents covertly shared information or language with one another on how to steer customers while not specifically violating fair housing protections. Sen. John Liu (D-Queens) accused NRT of being fully aware of discriminatory practices by some agents.

Gorman replied: "Under oath and for the record, definitely I and NRT were not aware of these practices.”

Sen. Kevin Thomas (D-Levittown), chairman of the Consumer Protection Committee, said Thursday's proceeding was just the beginning, that the Senate will soon be contacting the agencies and companies that failed to show up and that lawmakers will be pursuing legislation in Albany in 2020.

“We are committed to getting the facts, getting recommendations and acting accordingly,” Thomas said at the close of the hearing. “They will know we are deadly serious about discrimination here on Long Island, and segregation. We must end this.”

In its three-year investigation, Newsday sent testers carrying hidden cameras and microphones to meet with real estate agents and record the meetings. The findings included evidence that potential homebuyers were steered to neighborhoods based on race and that agents require preapproved mortgages from black customers but not white ones.

The Senate probe is just one of several announced following publication of the Newsday series. Gov. Andrew M. Cuomo and Attorney General Letitia James also have said they will investigate. Two state legislators have proposed a bill that would expand the state’s authority to suspend or revoke a real estate agent’s license.

Earlier in the hearing, the head of the New York State Association of Realtors told the senators his trade group was “appalled” by what Newsday’ had found.

“If there is one message we want to convey to you today, it is this: We are appalled by the actions reported by Newsday involving real estate licensees, and NYSAR wants to work with New York State to be a part of the solution moving forward,” association president Moses Seuram told the lawmakers.

Seuram said the group, after the Newsday report was published, suspended its real estate agent training classes statewide with the intention of revamping them. The report showed current methods weren’t effective he said.

In response to senators' questions, Kinirons said she did not know how many fair-housing investigations had taken place in the last year or have any details about testing programs by the attorney general’s office, including how many testers, if any, had been sent out to check for bias by agents in the last year. When asked if the attorney general’s office had sent out subpoenas, she said she could not comment.

The panel also heard testimony from two of the undercover testers deployed by Newsday to meet with agents. One, a white male, said an agent, looking to steer him away from a minority neighborhood, sent him a message telling him to read about the latest violence involving the MS-13 gang in the area. The other, a black female, told the senators she was shocked even more than she expected to be at the obvious steering efforts of the agent she encountered.

Senators had launched the hearing Thursday by calling evidence of unequal treatment of potential minority homebuyers by real estate agents that was raised in an extensive report by Newsday “alarming” and “repugnant.”

“These alarming allegations run contrary to our proud, 400-year history,” Skoufis said in opening remarks, regarding the founding of New York. “This is not who we are or, at minimum, not who we ought to be.”

Sen. Todd Kaminsky (D-Long Beach) called the Newsday findings of housing bias a “national embarrassment” and vowed to “use the investigative powers of the Senate” to further delve into real estate practices on Long Island.

During the hearing, a housing expert testified that real estate discrimination and steering of customers into certain neighborhoods is no longer overt, but now is more subtle. A black or Hispanic homebuyer no longer gets a door literally slammed in her face, said Fred Freiberg, co-founder of the Fair Housing Justice Center and a consultant on the Newsday project.

“Today, the image of slammed door has been replaced with a revolving door … (clients) are simply steered way from their desired housing,” Freiberg said. “Violators have simply learned to conceal their discriminatory conduct.”

A significant problem, witnesses said, is the state doesn’t spend money to deploy testers to investigate discrimination, which leads consumers to believe filing complaints will be pointless.

Asked by senators to grade, on a 1-10 scale, how seriously the state takes housing discrimination, Gross said: “I would put it at a minus-1.”

She added: “The state is failing to do its job with rigor and urgency.”

Earlier, Arthur Browne, the project director for Newsday, outlined the newspaper’s findings for the Senate panel, including 49 percent of African American testers receiving what housing experts deemed unequal treatment by realtors, and 39 percent of Hispanic testers.

Nassau County Executive Laura Curran told the panel she believed the actual rate could be higher and the newspaper was, if anything, conservative in how it counted incidents of unequal treatment.

“It’s very clear to me they erred on the side of caution and the numbers were probably not as low as reported,” Curran said.

With Maura McDermott and Candice Ferrette

Fair housing advocates: State needs to do moreActivists say they will push officials to enact new anti-discrimination measures at a state Senate hearing on LI.