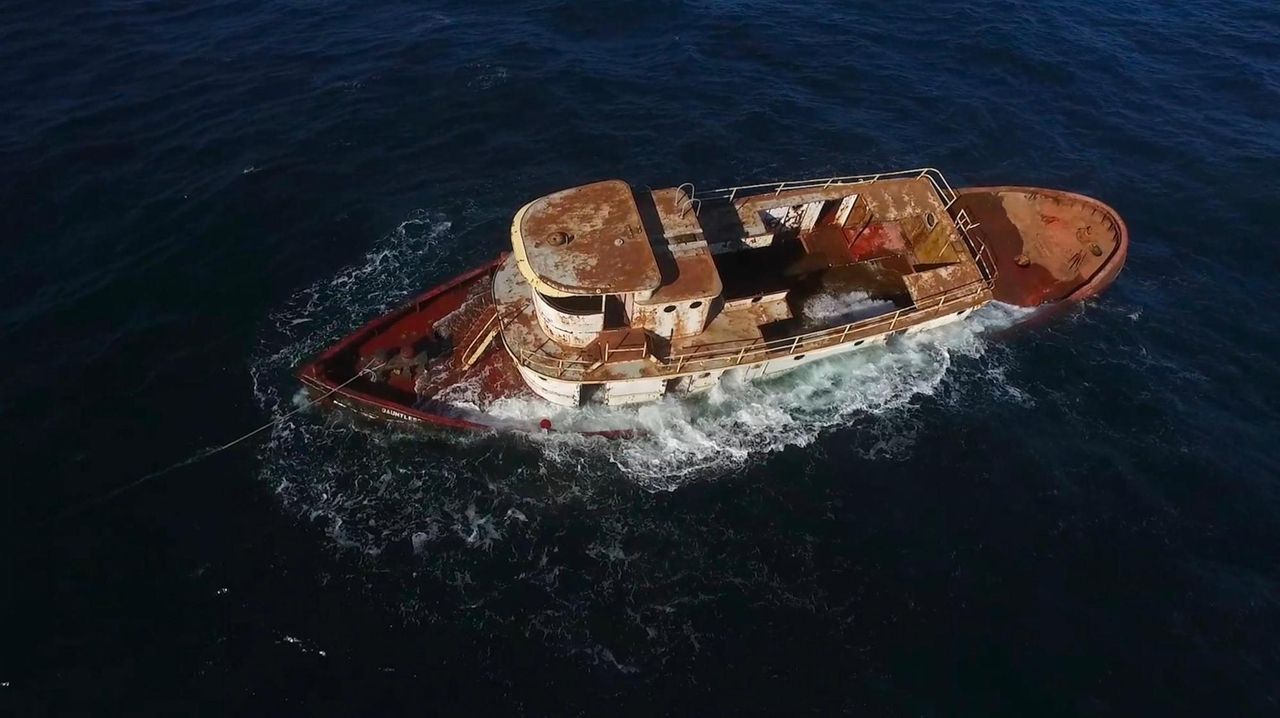 On Nov. 26, the state Department of Environmental Conservation sank two tugboats on a previously undeveloped artificial reef site off Shinnecock and Moriches inlets to provide a new destination for scuba divers and fishermen. Credit: NYDEC

The Long Island diving community, which has struggled with fewer people engaging in the sport locally in recent years, got an early holiday gift from the state.

On Nov. 26, the Department of Environmental Conservation sank two tugboats on a designated but previously undeveloped artificial reef site off Shinnecock and Moriches inlets to provide a new destination for scuba divers and fishermen.

The two shipwrecks are seen as an important boost for the local dive industry. There has been an increase in people getting certified to dive, but a growing percentage of them are only doing it in tropical waters — and not around Long Island.

The 100-foot Dauntless and 102-foot Relentless were sunk in 125 feet of water on Twelve Mile Reef, named because it is a dozen miles offshore. The tugs landed 1,350 feet apart, fairly close to what was expected, according to the DEC. The sinking was the culmination of two years of placing vessels and other surplus materials on reefs around Long Island in a project championed by Gov. Andrew M. Cuomo and requested by the Long Island Divers Association.

“The goal of the project is to entice more scuba divers — not just from Long Island but worldwide — to come explore the waters off Shinnecock and Moriches inlets,” said LIDA president Barry Lipsky, who was on hand for the sinkings. “The wreckage not only provides a playground for the divers, but also presents itself as a critical asset to the marine environment. The structures, placed in a bed of sand, will give marine life a place to flock to — plants will grow among the formations, fish will create their homes, predators will prey there. It will be its own natural environment.”

Cuomo said in a prepared statement that the state “continues to lead the nation in restoring habitats and protecting the environment, and a key component of our efforts is restoring habitat and wildlife diversity.”

Owners of dive shops and dive boats hailed the additions to the region’s underwater environment.

“After years of waiting, divers and fishermen now have significant wreckage on the Twelve Mile Reef, perfectly positioned between Moriches and Shinnecock inlets,” said Randy Randazzo, owner of Hampton Dive Center in Riverhead. “Most of the wrecks around Shinnecock in the 100- to 130-foot range are low-lying older wrecks. And there are only a few of them. Having structure with relief [contrasting elevation] off the bottom, like the two tugs, gives divers more wreck to dive on and gives marine life more places to habitat.”

Ralph Towlen, captain of the diveboat Halftime, based at Shinnecock, added that the two new wrecks will be a great attraction that will boost his business. “It’s a big deal,” he said.

Towlen’s 31-foot boat is a “six-pack” that has been taking a half-dozen divers out to the artificial reefs and other shipwrecks since 2010. He usually goes to the artificial reefs one day each weekend during the dive season (roughly May to October) because it’s a good place for divers moving from basic open-water training to advanced open-water training to practice their skills in deeper water. It’s also an attraction for people who don’t want to spend several hours traveling each way to a shipwreck in deeper water.

“These will be good wrecks at half the distance,” Towlen said. In the past he has taken advanced divers who wanted to dive a wreck out to the Cunard passenger liner Oregon, 27 miles from Shinnecock and a 31/2-hour ride each way. He said it will take less than half that to reach the two tugboats.

“This will be a very controlled environment where they can train,” Towlen said. “I’m sure there will be a lot of fish and lobsters there after one year.”

One of Towlen’s regular customers, Ed Seckeler, 59, of Brentwood, who has been diving for 15 years, said, “My friends and I love diving out of Shinnecock Inlet. Up until now the only limiting factor has been the limited amount of dive sites within recreational limits adjacent to the inlet. We have dived the wrecks and rubble on the artificial reef time and time again. The new Twelve Mile Reef is exactly what we needed to reignite our passion for diving, spearfishing and videotaping.”

Another of Towlen’s customers, Earl Bedrick, 72, of Mattituck, who began diving in 1963, said, “I have dived the area’s wrecks extensively. As a dedicated Northeast diver, it is always exciting to find new wrecks to dive, and these look very promising.”

Steve Bielenda, retired captain of the diveboat Wahoo and former head of the Eastern  Dive Boat Association, said this is a “beginning in creating a sustainable man-made environment at the crucial 20-fathom curve where cod and pollock, sea bass and many other varieties of fish live within the structures. They attract the pelagic fish to feed. Artificial reefs … result in significant economic benefit to coastal communities.”

Over the past two years, the state has added cleaned materials from state agencies, including parts of the old Tappan Zee Bridge and former Canal Corp. vessels, to its 12 artificial reefs in the largest expansion project ever. The state began developing artificial reefs in 1949.

While those in the dive industry are grateful for the two new wrecks, they don’t want the state to stop there.

“Hopefully the governor will sink something really big out there like in Florida,” Towlen said, referring to the dozens of ships sunk on artificial reefs, including an aircraft carrier, USS Oriskany. “That would be fantastic.”