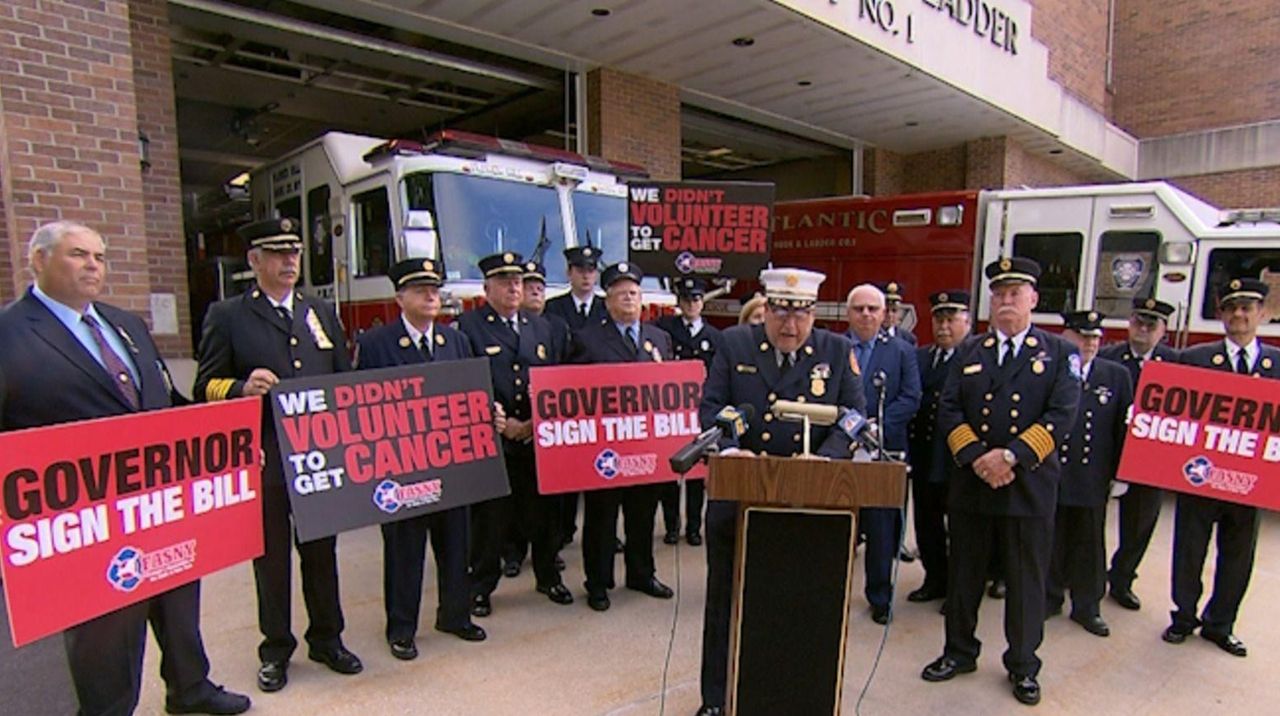 Long Island firefighters are urging the governor to sign a bill that would provide benefits for volunteer firefighters diagnosed with certain cancers.

Local fire chiefs and firefighters gathered Wednesday at the Port Washington Fire Department to ask Gov. Andrew M. Cuomo to sign the bill, which passed in the State Legislature in June.

“Simply put, firefighters have a higher incidence of getting certain cancers than the general public does,” said Steven Klein, vice president of the Firemen’s Association of the State of New York and ex-fire chief for the Oceanside Fire Department.

Career firefighters in New York State already receive similar benefits to those outlined in the bill, “and cancer does not discriminate between paid and volunteer firefighters,” he said.

Under the bill, qualified firefighters diagnosed with cancer would be eligible for a $25,000 lump sum payment, depending on the diagnosis.

Firefighters disabled because of cancer may also receive up to $1,500 a month for 36 months. The death benefit would be $50,000.

To be eligible, firefighters must have served at least five years as an interior firefighter and have had a physical exam that was cancer-free before he or she began volunteering.

Rich Azzopardi, spokesman for Cuomo, said in an email that “the legislation, which was one of more than 500 that passed both houses in the last days of session, has not yet been delivered to the Governor’s desk.”

“It remains under review by counsel’s office,” he added.

The Volunteer Firefighter Enhanced Cancer Disability Act was spurred by studies that show firefighters are contracting cancer after years of exposure to burning materials containing carcinogens, Klein said. It would be funded by local taxpayers, Klein said.

Thomas McDonough, 55, an ex-fire chief for the Port Washington Fire Department was diagnosed with thyroid cancer in 2013.

There’s no history of thyroid issues in his family, and McDonough believes he, his mother and brother all contracted cancer because of their time battling blazes.

His mother was a Great Neck Vigilant firefighter who responded to the Sept. 11 terror attacks and died of lung cancer in June. McDonough’s brother, a Great Neck Alert firefighter, is currently battling colon cancer.

McDonough is currently in remission but will continue to spend about $500 a year in out-of-pocket medical fees, he said.

“For volunteer firefighters, some don’t have adequate insurance or are self-employed and have deductibles that are much higher,” he said. “We should be able to at least do this for them and help their families defray the costs.”