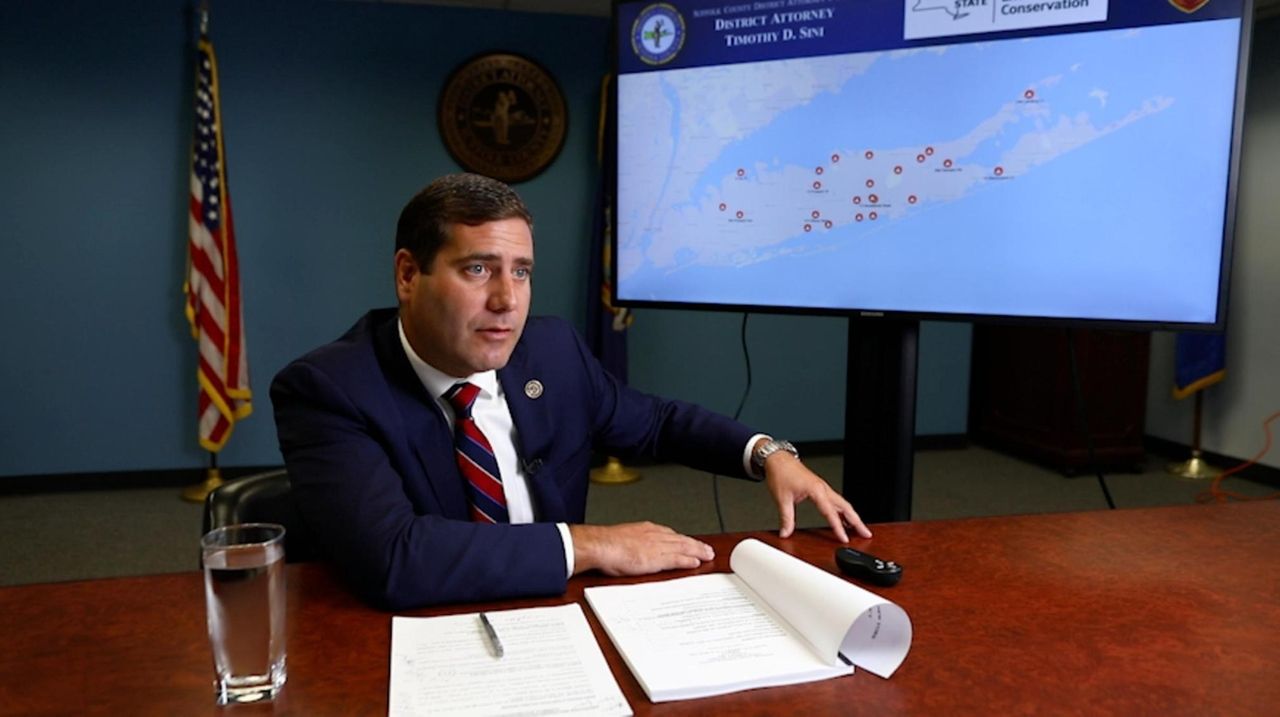 Suffolk County District Attorney Timothy Sini discussed the grand jury's recommendations on illegal dumping, including felony charges for those accused of dumping contaminated materials on the properties of unwitting victims who think they're getting clean fill. Credit: Newsday/Chris Ware

New York State needs new laws to prosecute illegal dumping suspects, tougher punishments for those convicted and increased regulation for the disposal of hazardous materials, according to a report from a special Suffolk grand jury that examined illegal dumping on Long Island.

The recommendations to state legislators and stakeholders in the 55-page report include proposals for the enhanced oversight by state regulators through the mandated e-tracking of hazardous materials and stiffer penalties depending on the composition of dumped materials. Suffolk District Attorney Timothy Sini said the measures would serve as a deterrent to violating environmental laws and protect the aquifer that provides Long Island's drinking water.

"The fact of the matter is, there is too much at stake to not closely regulate the disposal of solid waste and sand mining," Sini said in an interview to discuss the grand jury findings. "We need to be on top of this. We need to make sure we dedicate the resources to it, because the consequence is far too severe ... We cannot allow our aquifer to be compromised.  It's our most precious resource."

According to the report, there are no laws to specifically address damage to Long Island's water aquifer or any that target the illegal acceptance, disposal or possession of the following: solid waste, construction and demolition material, hazardous substances and acutely hazardous substances.

State law also does not address the transportation of any of those substances, the report says.

“We need statutes that deal specifically with illegal dumping and do not allow criminals to evade responsibility through loopholes,” Sini said.

The special grand jury's findings, which were unsealed Thursday, were born out of "Operation Pay Dirt," a monthslong joint investigation of the Suffolk district attorney’s office and the state Department of Environmental Conservation into illegal dumping on Long Island. The probe, which officials have said resulted in the largest bust for illegal dumping of construction and demolition debris in the state's history, led to a 130-count indictment charging nine corporations and 30 individuals with illegally disposing contaminated waste at 24 sites in Nassau and Suffolk counties.

Last week, Anthony “Rock” Grazio, a 54-year-old Smithtown man who prosecutors said was a “dirt broker” leading a scheme that supplied contaminated fill to construction sites across the island, was sentenced to 2 to 4 years in prison and ordered to pay $500,000 in restitution to his victims.

Long Island has been ground zero for illegal dumping in recent years, which has been fueled by its proximity to booming construction in New York City, officials say.

State Department of Environmental Conservation Commissioner Basil Seggos, in an interview Friday, said he has been in close communication with the Suffolk DA’s office regarding the report. While not weighing in on the specific recommendations, Seggos said “financial penalties are often the best methods of deterrence.”

The state has also cracked down on environmental crimes in recent years. “Operation TrashNet,” which was led by the DEC and launched in 2017, resulted in the discovery of 100 illegal dumping sites throughout Long Island and the Hudson Valley, including 44 in Suffolk County, and resulted in 582 DEC-issued tickets involving 40 trucking companies, officials said.

“Our efforts are not waning and we are a regular presence across Long Island, holding bad actors accountable for their actions with the assistance of Suffolk County District Attorney Sini and his office,” Seggos said.

The special grand jury, which was empaneled from July 18, 2018, to Aug. 2 this year, examined 420 exhibits and heard testimony from 48 witnesses. The panel continued its work after the indictments, shifting its focus to considering legislative, executive and administrative fixes.

The recommendations in the report include the creation of laws and regulations to more closely monitor the lucrative business of mining for sand, which is used to create cement, and proposes several fixes, including making it a crime to mine sand without a permit or to obtain a permit for agricultural or building purposes when the intent is to mine sand.

The report also calls for changes to current state law to allow for victim compensation and asset forfeiture funds to be distributed to victims of environmental crimes. Sini called current law on the issue “inadequate.”

Some of the victims of crimes alleged in the recent dumping indictments testified before the special grand jury, detailing remediation costs in the tens of thousands of dollars without any financial assistance.

One property owner said remediation could top $25,000, according to the report.

Sini said he is not calling for additional funding for his office to implement any of the report’s recommendations but said he will instead concentrate on enhanced partnerships with other agencies, such as the DEC and the Suffolk County Department of Health Services.

In the recent indictments, Sini said some defendants falsified documents related to the disposal of toxic materials. Sini said using technology could stem that conduct.

The system could work via a smartphone application with the data on a cloud controlled by DEC, Sini said. The data about the type and quantity of the material being picked up and transported would be imported into the app, with the same information added when it arrives at its destination. Signatures would be required.

“It's not going to eliminate the problem," Sini admitted. "Some people are just going to cheat the system entirely.”  But he said the fixes would make it harder to commit the environmental crimes.

Current penal law is deficient in the area of environmental crime, according to the report, lacking any laws that criminalize conduct that damages the public or the environment.

Sini, who spoke alongside top aides in his office — senior investigative counsel Christiana McSloy and Enhanced Prosecution Bureau chief Nicholas Mauro — said his office has relied in the past on top charges of second-degree criminal mischief, a D felony, to prosecute those accused of dumping.

Sini said the DA's office is working with state lawmakers to craft legislation prescribed in the report. Sini declined to identify which lawmakers he was working with, but the report endorses a proposal by Assemb. Fred W. Thiele Jr. (I-Sag Harbor) and State Sen. Kenneth LaValle (R-Port Jefferson)  to prohibit the issuance of DEC sand mining permits in counties with populations of more than 1 million and where the primary source of drinking water is a sole source aquifer.

Sini said he’s found that while some lawmakers may have concerns about passing additional criminal laws for fear the laws could negatively and disproportionately impact communities of color, there’s an understanding that many times environmental crimes are committed by lucrative companies and the victims are often in lower income communities.

“You’re talking about corporate, business people, who are making money and who are polluting our environment to make more money," Sini said. "The stakeholders and lawmakers understand the need to protect our drinking water. They also understand this is a crime of greed.”