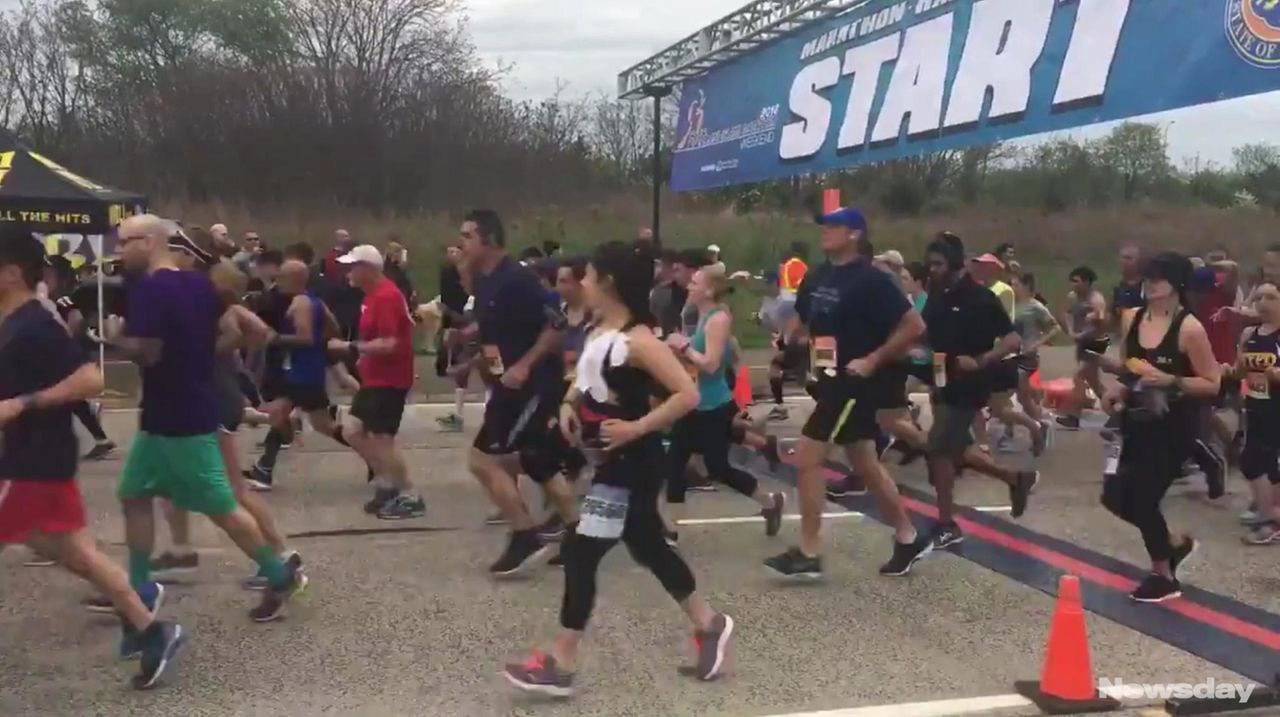 If you couldn't make it to the RXR Long Island Marathon on Sunday, here's an inside look from the sidelines -- and from a runner's point-of-view. Credit: Newsday / Vera Chinese

Cheryl Donald was 32 seconds too late in her quest to run the Kentucky Derby Marathon in under four hours and score a personal milestone.

But at the RXR Long Island Marathon on Sunday, the Hofstra graduate who lives in Bushwick, Brooklyn, crossed the finish line in 3 hours, 59 minutes and 13 seconds.

“I almost cried; I’ve been trying so hard,” said Donald, 42, a marriage and family counseling therapist who trains by running 200 miles a month and has finished eight marathons since 2014. “Long Island must have been the holy grail.”

Scenes of triumph, cheering and celebratory drinking played out Sunday as thousands of runners completed the 26.2-mile marathon, half-marathon and 10K under cloudy skies. The races all began at 8 a.m. near NYCB Live’s Nassau Coliseum in Uniondale and ended across from Parking Field 5 at Eisenhower Park in East Meadow.

“Marathons are the ultimate challenge,” said Justin Wezik, 30, of Hempstead Village, as he ran his 10th Long Island marathon. There’s nothing like participating in a big race close to home, he said.

“You get to run the streets you drive everyday,” said Wezik, who finished in 3 hours and 51 minutes.

Some runners wore costumes. Supporters, many holding colorful signs with inspirational messages, positioned themselves on bleachers or grassy highway medians closed off to motorists for a view of the runners.

“It seems like all of Long Island is running,” an announcer said over the marathon’s speaker system as thousands hit the pavement — some quickly discarding layers of clothing on patches of grass.

Volunteers in yellow shirts handed out water in paper cups, dozens of which were tossed about on roadways. Waiting on the other side of the finish line were plastic bag packages of bagels, bananas, apples and muffins, along with event staffers ready to pour post-race beers.

Sam Buttigieg, 61, of Massapequa, who recently retired from JPMorgan Chase, finished his first half-marathon in 20 years. He and other Massapequa Road Runners gathered in the designated beer tent after the race.

“Oh my God, it’s the best beer ever,” Buttigieg said.

Former Hempstead Village Mayor Wayne Hall Sr., 71, who had kidney transplant surgery in August 2016, posted videos of his 10K race on Instagram, along with some self-motivating commentary. As he reached the 4-mile marker, he told himself, “Looking good, Wayne,” and “not bad.” As he hit a fifth mile, he said, “Here I go. . . . Getting there.”

Peter Gagliardo and Maria Bournias of Tenafly, New Jersey, raced with hand-crank cycles in the marathon. Maria was born with spina bifida and Peter suffered a spinal injury in 2006.

“The reason I choose this sport is it’s one of the few adaptive sports,” Gagliardo said before the race started.

Runners with the Carle Place-based Step by Step organization pinned the names of those who have battled ovarian cancer to their T-shirts, in an effort to raise awareness. The group of 12 has raised $5,000 this year, director Joe Bencivenga said.

Others motivated themselves through humor. Friends Maria Becker of Bay Shore and Vicky LaSala of Seaford had shirts made up for their first half-marathon, stating on the front: “I thought they said 1.31 miles.”

Max Gorelik, 37, of Springfield, Pennsylvania, fresh off his third marathon this month, said he enjoyed the serenity of the course.

“There are no distractions,” he said of the mostly parkway route. “It was the best organized race I’ve ever run.”

More than 5,000 people registered for the three races held Sunday after a fun run and other activities on Saturday. Organizers reported Saturday that 786 runners registered for the marathon, 3,229 for the half-marathon and 1,277 for the 10K, up from last year’s participation when 474 people ran in the marathon, 2,073 in the half-marathon and 1,105 in the 10K.

Couple turn LI Marathon into ‘marry-thon’Dave Ludin crossed the finish line, dropped down to one knee and proposed to Jill Mahon with a ring he made from a gold coin. Russo on quite a run heading into Long Island MarathonThe rain pelted Gabrielle Russo with every step, and 40-mph wind gusts meant there was ... Family runs LI Marathon in memory of late sonFather and two daughters take part in the 1-mile race to raise money for families affected by cancer.

What to do at the Port Jefferson Ice Festival this weekend
Early trans-Atlantic flight attendant dies at 96
Wave of uncertainty for LI schools as appeals judge weighs mask mandate
Second NYPD officer shot in Harlem on Friday has died, commissioner says
Mask confusion: Parents, students wonder what's next with school mandate
Condo residents having a ruff time over dog park near their home
Didn’t find what you were looking for?