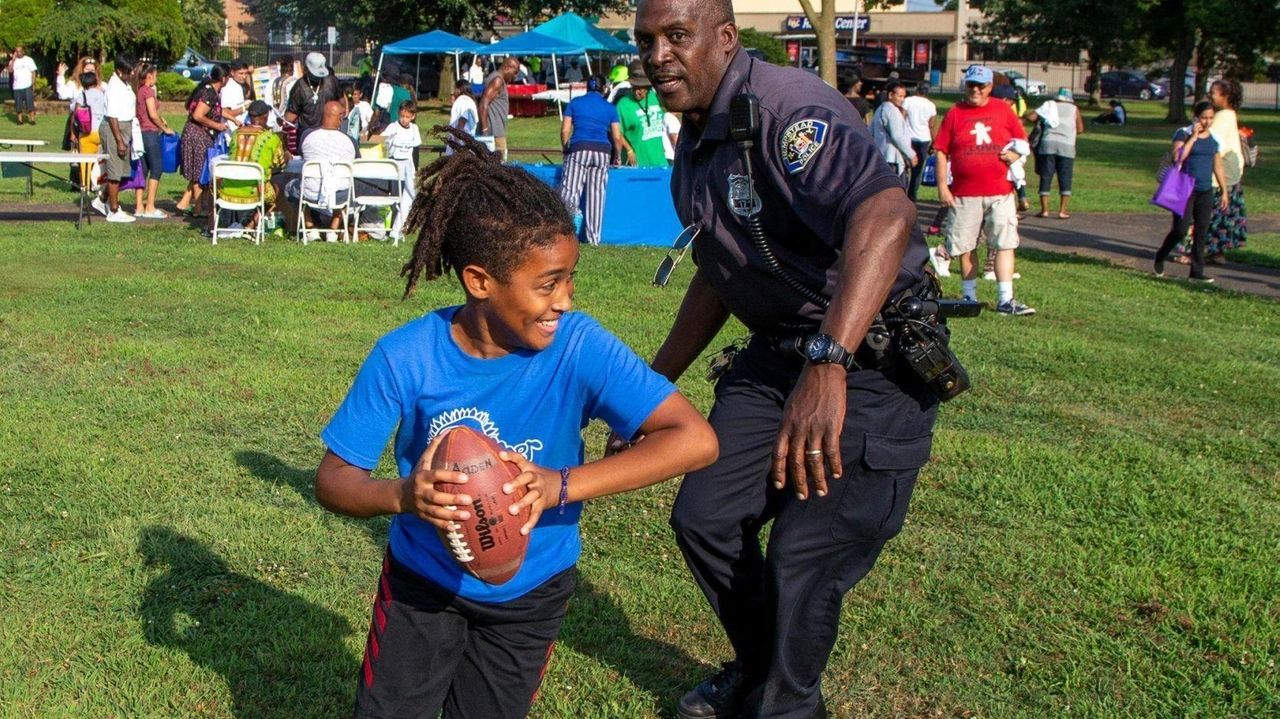 On Tuesday, residents of Hempstead Village participated in the National Night Out event. The annual community-building event, which is aimed at increased the dialogue between law enforcement and the neighborhoods they police, was welcomed in the village.  Credit: Howard Schnapp

Mikaela Ronaronni, 6, was bubbling with excitement as she raced through Denton Green Park in Hempstead toward the three bounce houses in the distance, her eyes fixated on the blue one with the big climbing wall and slide.

Mikaela dragged her mother, Genesis Ronaronni, into the park at the first sight of the inflatable trampolines — one of the top attractions at Hempstead Village's National Night Out event.

"I am going to do everything," said Mikaela, her voice peaking with enthusiasm.

For Hempstead Village residents, the annual community-building event, aimed at improving the dialogue between law enforcement and the neighborhoods they police, is a welcome distraction.

The 55,000-resident village has been beset in recent months by gang-related shootings. Already in 2019, the village has recorded six homicides, representing nearly half of the 14 killings in the entire county of 1.3 million residents. The village had four murders in all of 2018.

Three hours before crowds started to gather at the park to play volleyball, compete in a talent show and devour hot dogs and hamburgers, Gov. Andrew M. Cuomo visited the village library, less than two blocks away.

Cuomo announced that uniformed Nassau police officers and state troopers would help patrol the village, alongside Hempstead police, for the next month to combat Hempstead's "unacceptable" gang violence problem.

"It's definitely a good thing," she said. "I don't want to walk around at night and fear being robbed."

Didier Cassagnol, a retired Hempstead police officer, said events such as Night Out are "imperative" in bridging the gap between police and village residents.

"They need to realize that the police are here to help," Cassagnol said. "It's helpful for kids to see more positive role models."

Hempstead Village Mayor Don Ryan agrees and said it's important that residents and police get to know one another and not view each other in adversarial roles.

"There are not so many chances for both sides to get together for a positive reason," Ryan said.

But residents concede that building bridges between residents and police won't come overnight.

Karen Hyland of Hempstead says her two young grandchildren, Jaylin and Josiah, are often afraid of the police. But Hyland said greater trust is needed between village youths and local law enforcement to help bring a sense of peace back to the village.

Suffolk lawmakers accept up to $106M in opioid settlements
Petition seeks to bar nonresidents from speaking at school board meetings
Three LI hospitals ranked among Top 50 in the nation
Shea on vaccine mandate: 'We are going to comply with the order'
Schumer to Navy Secretary nominee: Prioritize cleaner water for Manorville
Northport hotel developer's lawsuit against village can proceed
Didn’t find what you were looking for?