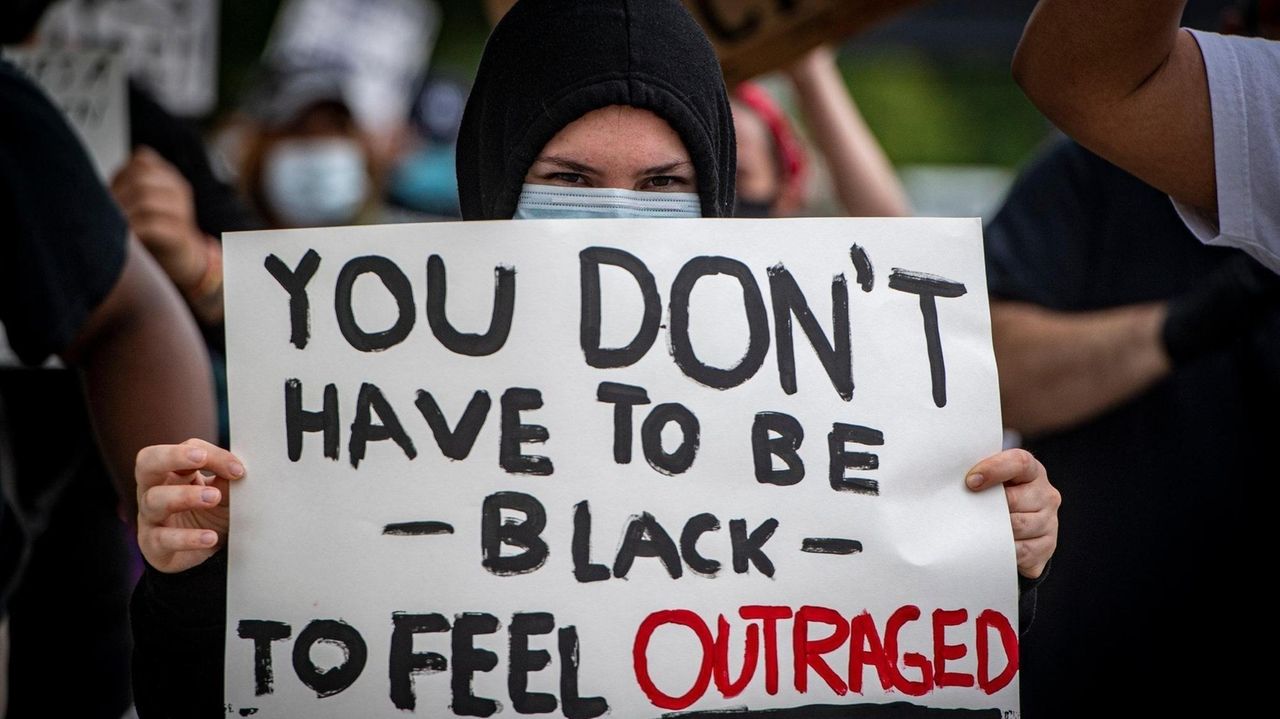 Long Islanders from Long Beach to Bridgehampton took to the streets and online Tuesday, once again speaking out against the killing of an unarmed black man in Minneapolis at the hands of police last week.

In several events, officers and elected officials adopted what has become posture of support —  kneeling out of deference to the victims of police brutality and in solidarity with the demonstrators.

The gatherings were orderly, similar to those on prior days, and let Long Islanders add their voices to the national outrage over the Memorial Day killing of George Floyd, 46, who died after he was pinned to the ground by as many as four officers on a city street — one, a white officer, had his knee pressed against Floyd's neck for more than eight minutes.

So far, protests this week on Long Island yielded just two arrests, during one event in Shirley Monday, in contrast with the hundreds made in New York City and other cities across the nation in widespread demonstrations and rioting in the week since Floyd's death.

But there was also a greater law enforcement presence at some events, curfews imposed, some stores boarded up and officials warning against social media posts that they said inflamed tensions with false threats.

The mayors of Cedarhurst and Lawrence in Nassau’s Five Towns declared village-wide curfews from 7 p.m. Tuesday until 6 a.m. Wednesday for all but essential workers and first responders.

The move, officials said, came after reports of a protest scheduled for Tuesday evening in nearby Far Rockaway that they feared could become violent.

The marches and protests went on across the Island and often included diverse groups. While there was tension with police, including a brief standoff in Merrick, there appeared to be few skirmishes and many demonstrators expressed a desire to keep such gatherings nonviolent.

Nearly 1,000 protesters marched down the Long Beach boardwalk and Riverside Boulevard, and many took a knee for nine minutes to symbolize the estimated time that a Minneapolis police officer pressed down on Floyd's neck.

“It’s sad when you literally watch a man die in front of your face,” Hodge said. “It’s sad that every time a black man hears a police siren your stomach drops. You get scared and the cop keeps going by.”

Protesters such as Martha Malave of Freeport insisted they wanted to show a contrast with the more violent gatherings in Manhattan in recent days.

“Stop the violence,” Malave said. “This is sad. Everyone is losing track of what we are fighting for. We are fighting for peace and unity and to end racism. This should have ended a long time ago.”

“It’s a frightening thing because you are talking about taking someone’s freedom,” he said. “That’s when our civil rights should light up. … No matter what you’ve done, in America you are innocent until proven guilty. . .  You shouldn’t be beaten."

Michael Smith, deputy chief of the Freeport Police Department, said his officers provided masks to marchers and helped make sure they were safe from oncoming vehicles.

“We let them know we are out here for them and support them,” Smith said. “Most of them are supportive of the work we do and realize that not all police officers are bad. But they recognize that there needs to be some change done in the conduct of some police officers and it hurts all of us across the country.”

Despite the peaceful protests, Village Mayor Robert Kennedy Monday had requested the National Guard, along with Nassau and State Police, to provide additional assistance with the demonstrations. Village officials said the move was meant to be proactive and ensure that future protests don’t become violent.

In Merrick, Katie Mulligan, a Presbyterian minister in her 40s from Farmingdale, joined dozens of 20-somethings and teenagers Tuesday evening, some holding Black Lives Matter signs and chanting "Hands up! Don't Shoot."

The demonstrators were mostly white, like her. They urged onlookers and participants to "Say their names" while calling out the names of recent victims of police brutality, such as George Floyd and Breonna Taylor.

Later, as the group of about 50 marched, as many as 17 officers blocked their path, prompting a speaker with a bullhorn to shout "Take a knee." One officer did. The march continued after a brief standoff and some marchers thanked the officers for doing so.

Earlier in the evening, in Bridgehampton, a large diverse crowd, including fashion designer Donna Karan, took to Main Street from the iconic Candy Kitchen restaurant to the monument at the Bridgehampton-Sag Harbor Turnpike. Montauk Highway drivers honked in support.

Hundreds knelt in the street for 8 minutes and 46 seconds — the amount of time police officer Derek Chauvin knelt on Floyd’s neck — chanting “I can’t breathe.”

Jeannie Murray, 70, who was born in Jamaica and lives in Sag Harbor, said she does not usually attend protests but was moved by Floyd’s death.

“My whole body started to shake,” she said.

Freeport police, backed by State Police holding batons and wearing riot gear, stood at the front of the Nautical Mile business district facing off with protesters.

Protesters shouted at police, “It’s not about you, it’s about the tactics you use,” and, “Do you think I’m going to let anyone tear up our Nautical Mile?”
Protesters asked police to take a knee or share their thoughts on what needed to change, but officers did not respond.

Meanwhile, Smithtown officials released a statement in response to a social media post that was followed by a number of posts that officials said have inflamed tensions with false allegations and images of looting and other disturbing material.

"We are all grieving right now in some way or another," said Brian Farrelle, community relations assistant. "This is a time of mourning, a time when we should all come together in peace. Do not let gossip, or images intentionally designed to provoke hostile expression, incite panic or aggression."

In Brentwood, Valerie M. Cartwright, Brookhaven Town councilwoman and a civil rights attorney, also spoke with great emotion on a Women's Diversity Network news conference, saying:   "What we need to make sure is that we recognize that is this is our reality of all of our black and brown people, this is our reality and we are speaking out, we are protesting … we are talking and saying to our elected officials that enough is enough."

The event was held at the Brentwood Park and Ride, located across from the Suffolk County PBA and later, protesters marched to the Suffolk PBA, chanting "I can't breathe."

Huntington restaurant owner under fire over racist remarksThe owner of Tutto Pazzo on a Facebook live session called people who were protesting police brutality on Monday "little animals, savages."  NYPD: About 280 arrested during protestsTense standoffs and sporadic violent clashes between protesters and police officers continued in Manhattan and Brooklyn Tuesday night, but the rampant destruction seen over the past few nights appeared to have calmed.