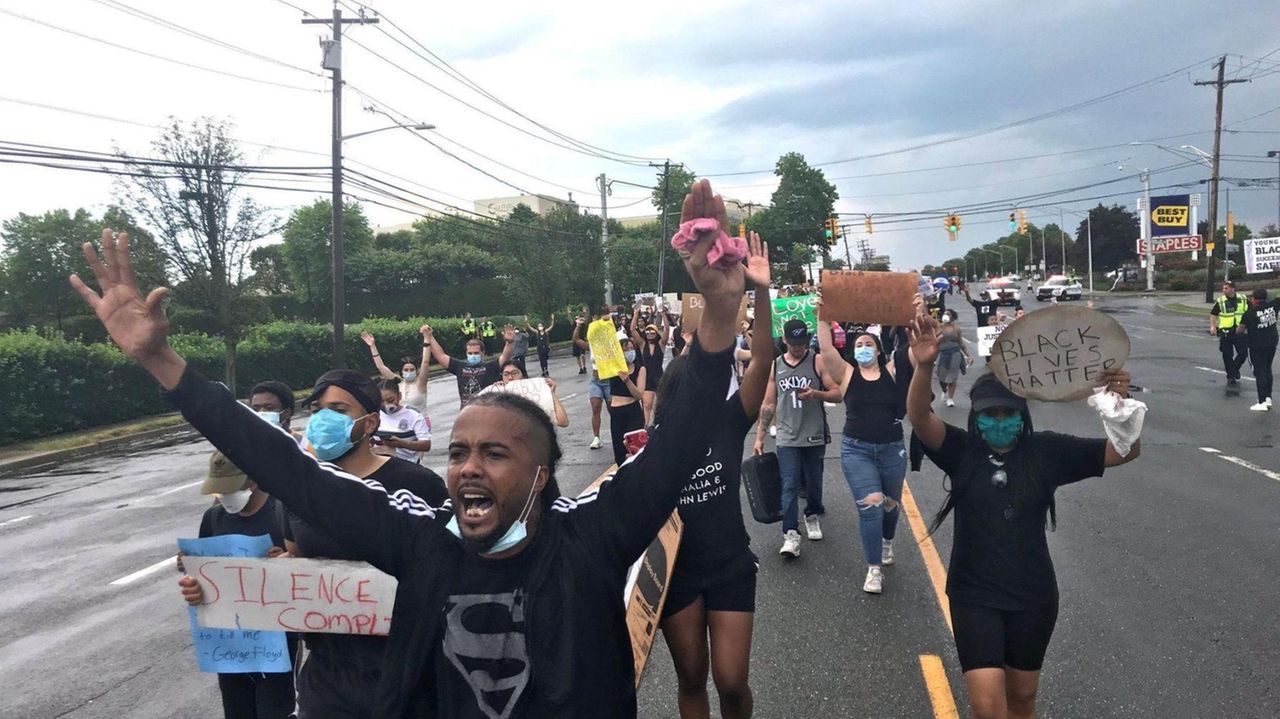 Saturday completed a full week of protests across Long Island demanding an end to police brutality. The demonstrations followed the police-involved death of George Floyd in Minnesota on May 25. Credit: Newsday / Shelby Knowles; James Carbone

Nassau County police arrested 11 people at a protest in Merrick against police brutality as demonstrators marched in communities across Long Island for a seventh day to plead for a justice system in which all are treated fairly.

The statement said the efforts to keep protesters off the road as a safety precaution were "met with strong opposition and resistance."

Police said two officers suffered injuries that were not life threatening but provided no other details.

Earlier Saturday, hundreds of people protesting police brutality sat down en masse on the street in front of a Suffolk County police station in Huntington, chanting "Hands up, don't shoot!"

The demonstration began in downtown Greenlawn, where protesters rallied in a downpour and then steady rain before marching down Broadway, which police shut down at one point when the multiracial but predominantly white group of protesters took over the street.

As about 500 marchers approached the Second Precinct on Park Avenue in Huntington, a phalanx of police officers were waiting.

The protesters arrived with their hands in the air, shouting "Hands up, don't shoot!" before about 350 sat on Park Avenue, their chant changing to "I can't breathe" at a deafening level.

Those were the words George Floyd struggled to say as he died on a Minneapolis street on May 25, with Police Officer Derek Chauvin's knee pressing against his neck for nearly nine minutes.

There were tense moments during the hourlong sit-in. Protesters spoke with raw emotion about police brutality and their fear of the police. A police helicopter made passes overhead.

Protesters asked the roughly 50 police officers watching them to take a knee in solidarity, but they declined, with Inspector William Scrima saying, "Our job is to remain neutral and maintain the peace."

Kimberley Klein, 25, of Northport, said she protested because her conscience gave her no choice.

"Me not coming is nothing but privilege,” she said. “Black people don't get that choice. I'm tired of hearing about racism and people dying. Rain or shine we're here because we're ready and it's time to end inequality and racism."

The impetus for the protests on Long Island, in New York City and worldwide was outrage over Floyd's death.

But demonstrators say they want the protests to lead to substantive, lasting change.

Christina Lemyre, 31, of Bellmore, co-organizer of a protest of about 200 people along Stewart Avenue in Bethpage, encouraged reforms such as requiring police to wear body cameras.

“This nuisance is becoming a movement,” said Lemyre, adding that the protest was not anti-police. “I love that it’s stopping traffic and pulling people out of their homes. It’s an opportunity for everyone. Racism has no place on Long Island. It’s 2020. Enough is enough, silence is violence and we’re done.”

On Long Island, only Suffolk County and Freeport police have body cameras.

“As long as we keep peace and unity as the primary purpose in mind, you need to provide information how to actually implement change,” said organizer Nicole Nirenberg, 31, of East Meadow. “Standing on a sidewalk makes us feel together, but we need to do more.”

In Merrick, where more than 4,000 people demonstrated on Thursday and where a group of white residents Tuesday tried to block a march, nearly 200 people walked up Henry Avenue and Merrick Road. Some tried to get on the southbound entrance to Meadowbrook Parkway, but police stopped them.

Protesters held up signs that said “Racism is an epidemic” and “Am I Next?” Some residents, drivers and business owners clapped in support.

Kelly said he did not watch the video of George Floyd dying with Chauvin’s knee on his neck because “l couldn’t bear to see another black person murdered that way.”

Nassau County Legis. Steven Rhoads (R-Bellmore), who represents parts of the area where the protests in Merrick, Bellmore and surrounding communities have taken place, sent a letter before Saturday's demonstration to Curran objecting to the scale of the protests, which he termed a "crisis."

Rhoads, who chairs the legislature's minority affairs committee, said demonstrations have shut down streets during rush hour, blocking residents from returning home or commuting to work. He criticized how protesters Thursday night spilled onto Southern State Parkway, "creating a danger to themselves and motorists." The parkway was closed for about two hours.

Curran's office released a statement that she "takes advice from the Commissioner of Police and listens to the brave men and women who serve and protect, not a part-time Legislator with a history of spreading unauthorized and inaccurate information that only serves to further fan residents' anxieties and fears."

Curran praised police for being "true professionals in de-escalating tensions, safeguarding property and ensuring the safety of all" and accused Rhoads of trying to "score political points during a period of nationwide protests.”


Curran said 10 protests had been planned for Saturday in Nassau and at least five for Sunday.

At a 100-person protest along Deer Park Avenue in Deer Park, Selwyn Mohan, 52, a Trinidadian man who lives in Bay Shore, said: “We just want equality. I’m not asking for anything special. We just want to be treated the same.”

Mohan said he wanted his son to see him demonstrate, in hopes that life as a minority will be better for him.

“Our generation let them down because we stopped fighting,” Mohan said.

Justin Ashman, 21, of North Babylon, who was also at the Deer Park protest, said he came because “I’m tired of everything that goes on between police and black people. It has to change.”

In Westhampton Beach, hundreds sat and lay down on Main Street chanting “George Floyd” and “mama” — a reference to how Floyd called out for his mother as he died.

In East Setauket, protesters gathered on Route 25A, holding signs with messages such as "racism is a sin" and "we will not be silenced." Many knelt on sidewalks along the roadway as they held their signs aloft.

About eight counterprotesters yelled “go away” and “go back home,” with a man chanting “four more years” in a bullhorn, amid a cardboard cutout of President Donald Trump.

One man blew cigar smoke into protesters’ faces, and a woman threatened to take her mask off and cough in their faces until demonstrators yelled at her and she walked away.

Suffolk County Executive Steve Bellone, at a virtual news conference Saturday, said he credits protesters and police officers for working together at demonstrations in Suffolk to create “peaceful” protests.

“Today we are not only coping with a public health crisis, but a crisis of concern and anger in our community that has been expressed through days of protests here in Suffolk County,” Bellone said.

The Suffolk County Police Department’s policies don’t allow for the “the kind of practice that’s part of policing in Minneapolis. It’s not what we do here,” Bellone said. “But there are always areas for us to make progress.”