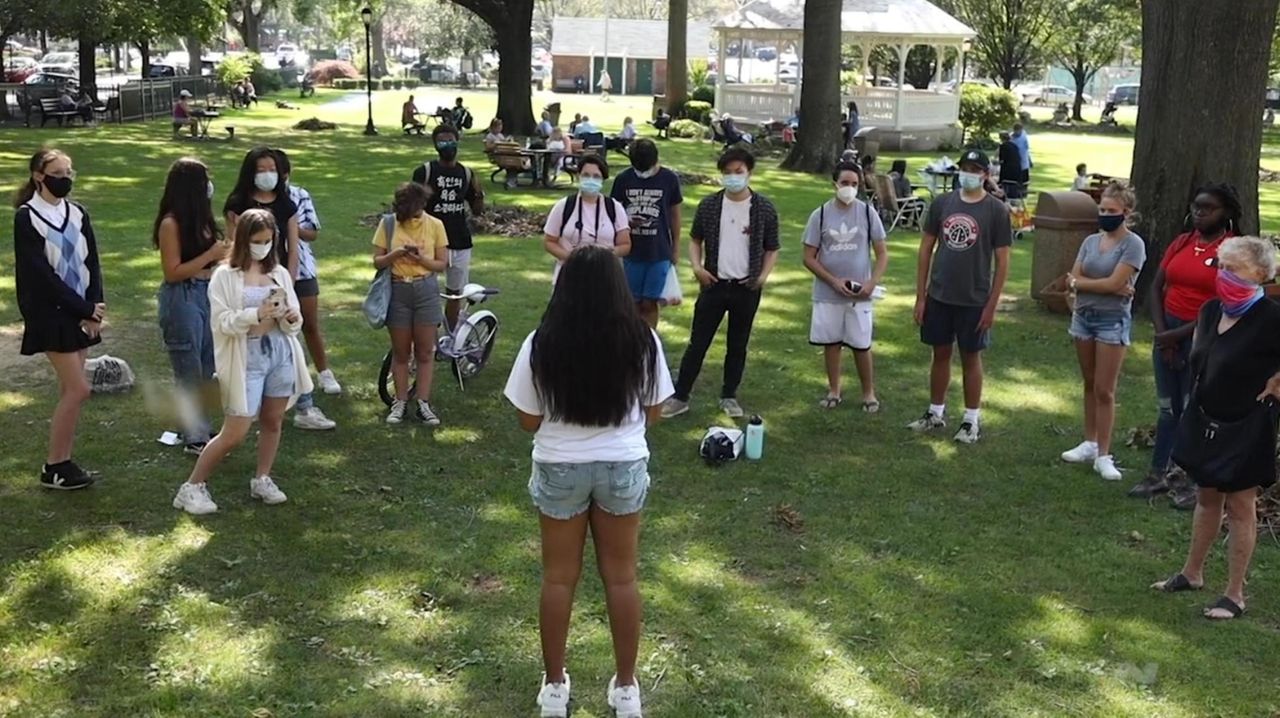 Since George Floyd's May death in Minneapolis police custody, Long Islanders have taken to the streets — many protesting against police brutality and others in support of law enforcement. A few have gone to greater lengths, not just attending protests and rallies, but also organizing them.

Newsday spoke to four organizers about their motivations for getting involved.

Last year, Great Neck North High School senior Chelsea Cohen was busy participating in a long list of after-school activities, including leadership workshops as part of the school's "No Place for Hate" club.

This year, Cohen got a chance to put her new leadership skills to use — she spent the summer helping three of her friends, Naomi Hazan, 17, Ellie Lampione, 16, and Elizabeth Sokolova, 16, organize protests, marches and other events in support of the Black Lives Matter movement.

Cohen said the four girls come from diverse backgrounds and created the Instagram group, @greatneckprotests, to take their activism "beyond social media posts" and into real life.

"My mom's half-Mexican, half-French, and my dad's Guyanese," she said, "Naomi's half-Persian, half-Israeli, Ellie's family is Greek, and Lizzie's Russian and Ashkenazi."

The group's first protest June 7 at Great Neck's Grace Avenue Park drew a crowd in the hundreds, Cohen said. The event took place on a day when thousands turned out for Black Lives Matter demonstrations across Long Island.

"After that day, I felt more inspired and more motivated to keep that momentum going here in Great Neck," Cohen said. "We all want to keep the conversation going, otherwise these issues will just get brushed under the rug again. That's why we continue organizing protests and events."

Cohen said the group's monthly events, which include "an educational aspect" focusing on different areas of systemic racism, provide an outlet for her and others who feel the same to "say everything we've been thinking and feeling for a few years now."

"It's not all blatant racism, a lot of it is microaggression, " she said. "People who say, 'Well, how come if you're not white, your last name is Cohen?' "

"There's so much learning that needs to happen and that's why these events are so needed because they help open people's eyes to the fact that it's not all about police brutality or white on Black crime," Cohen said. " … So yes, it's a lot of work, but it's worth it."

For West Babylon resident Joseph Ryder, an NYPD officer for the past three years, showing support for law enforcement "is so important right now" that he felt attending a "Back the Blue" event wasn't enough.

So Ryder, no relation to Nassau Police Commissioner Patrick Ryder, joined the Long Beach-based group, Law Enforcement Officers Weekend, and helped organize a July pro-police rally in Eisenhower Park. The event attracted a crowd of more than 1,000, according to a Newsday story at the time.

"The whole premise of these events and why I'm drawn to helping organize them is, let's show these good, hardworking police officers that as a community, we support you," said Ryder, a Stony Brook University graduate and the son of a retired NYPD officer.

Witnessing the intense verbal and physical denigration experienced by some of his fellow officers, Ryder said, is what drove him to take on a more active role in "helping create something to uplift the spirits and morale of police officers in New York and throughout the country."

When police officers are on the job, they want to help, not hurt, he said.

"We don't go to work looking to arrest people," Ryder said. "I go to work to try to help my community, and I feel that most of the officers I work with have the same exact goal in mind."

To be clear, Ryder said, showing support for law enforcement does not equate believing that what happened to George Floyd was right.

"We can all agree, it wasn't," he said. "It also doesn't equal thinking that police reforms aren't necessary. But I think it's unfair to judge an officer in New York ... [by the actions of] an officer in Minneapolis, which is what's been happening."

Even so, Ryder said he'd like to see a greater emphasis on community policing and that he favors increased de-escalation training for police officers.

"At the end of the day, we all have the same objectives. We want safe communities," he said. "But we won't get anywhere if we have the police on one side and the community on the other … we have to work together."

Since Floyd's death, Terrel Tuosto and his brother, Tiandre, 25, have become among Long Island's most visible activists and organized several demonstrations over the summer.

Together the Tuostos, who are biracial — their mother is white and their father is Black — founded the Instagram page @lipeacefulprotest, where they share updates about area demonstrations, including the more than a dozen they've organized, with the account's more than 3,000 followers.

Even so for the brothers, organizing protests and taking to the streets to demonstrate has come at a price. They've both been arrested during protests this summer.

On June 12, the Tuostos were arrested and charged with disorderly conduct for allegedly obstructing traffic at a protest in East Meadow. A third protester also was arrested. Nassau police Det. Lt. Richard LeBrun said afterward that officers "repeatedly asked for these specific protesters to not march in the southbound lanes of traffic and they continued to do so anyway, placing not only themselves, but our police officers and motorists in danger."

Terrel Tuosto's arrest there was captured in a bystander video that soon went viral, garnering more than 7 million views. On July 22, he was one of three people arrested in Commack during a Black Lives Matter protest on Veterans Highway. Tuosto was charged with second-degree reckless endangerment and disorderly conduct/obstructing traffic, Suffolk police said.

"Long before Floyd's murder, that passion [for racial justice] had been with me," said Tuosto, a plumber. "Growing up on Long Island, and being biracial, though, I identify as Black … I saw how differently white people and Black people were treated."

Tuosto said experiences when he was younger shaped his perspective on racial issues, such as being in a car with people who "out of irrational fear" locked the doors while driving through mostly Black neighborhoods.

Talking about race or problems that involve race is never easy, he said.

"For many people, it's a very personal, sensitive subject. For some people, it's so difficult that it's hard for them to even listen to, let alone engage in, conversations about it … they just don't want to hear it," Tuosto said.

That's why, he said, "the more allies, the better," including celebrities, "specifically, white celebrities," who speak up about the movement.

"There's always a chance someone will listen to them," he said.

Of his and his younger brother's protest efforts, he said, they're most effective when "inclusive of as many different voices as possible."

"When we band together," Tuosto said, "that's when change happens … while these conversations may be uncomfortable, they need to happen. It's the only way to move forward, the dialogue must continue."

For many NYPD officers, they first wear their dress blues and white gloves on graduation day after months of academy training.

"It's, by nature, supposed to be a very joyous occasion," said Austin Glickman, an NYPD officer from Long Beach.

For Glickman, his first two times wearing the dress uniform, in late 2014 and early 2015, had him feeling plenty of emotions, none of them celebratory. Shortly before Glickman graduated from the police academy, he attended the funerals of two NYPD officers shot dead at point-blank range in their patrol car in Brooklyn by a man who police said targeted them because they were cops.

"There was no confetti raining down," he said of the funerals for officers Wenjian Liu and Rafael Ramos. "We didn't throw our gloves in the air or leave to our families cheering."

For the soon-to-be rookie cop, their funerals left a lasting impression and, he said, "almost immediately" sparked him to start Law Enforcement Officers Weekend. Since then, the group has branched out and now organizes a range of events throughout the year, including the July pro-police rally in Eisenhower Park.

A summer of protests over the fatal shootings of Floyd and other Black people by police nationwide lowered morale among the rank-and-file, Glickman said, and raised the need for pro law-enforcement rallies.

"Are there a few, terribly bad apples? Of course," he said. "There are bad people everywhere, in every profession. But to label us all the enemy is egregious."

Interest in the group often comes after tragedy — news of police officers attacked on the job. The recent ambush-style shootings of two Los Angeles County Sheriff's deputies that left both with serious injuries served as the latest example.

Glickman's group, which has about 48,000 Facebook followers, gained 5,000 in the first few hours after the shootings

"It's important for people to remember that police officers and their families ... [we] have a voice, too."