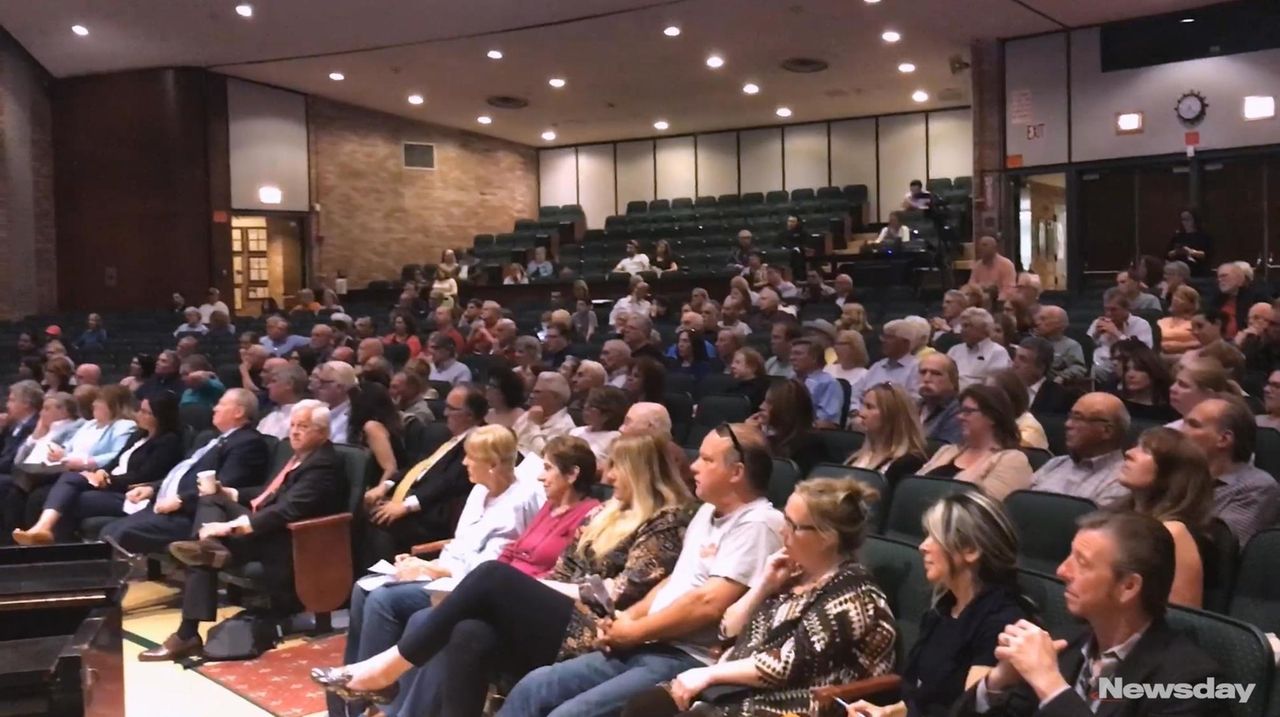 For the second time in two weeks, hundreds of North Shore residents attended a meeting organized by opponents of Gov. Andrew M. Cuomo’s proposal to build a tunnel from Oyster Bay to Westchester County. The meeting on Wednesday was at Locust Valley High School. Credit: Newsday / David Olson

Cuomo is promoting a tunnel between Long Island and Westchester County as an economic boon. But opponents fear multistory ventilation shafts along the coast spewing exhaust into the air, greater traffic congestion, environmental damage and higher taxes to fund the project, which a recent study estimated could cost as much as $55.4 billion.

Jim Gaughran, chairman of the Suffolk County Water Authority, told the crowd in the Locust Valley High School auditorium that “the water quality issues could be catastrophic. . . . It’s going to be an environmental disaster for our drinking water supply.”

Gaughran, a Democratic candidate in the 5th State Senate district who said he was not speaking on behalf of the water authority, said the tunnel and the years of construction to build it would destroy many North Shore water wells and endanger the water supply with more pollutants and salt water.

In response to concerns about the tunnel, state Department of Transportation spokesman Joseph Morrissey referred Wednesday to his statement before the April 24 Bayville meeting, in which he said the department “is committed to conducting extensive outreach with affected communities. . . . The conversations to date have and remain about exploring opportunities to reduce the congestion and enhance the economic competitiveness of Long Island.”

Debbie Lane, 64, of Oyster Bay Cove travels to New England regularly for her job as a wine wholesaler and to visit friends. Although a tunnel would offer her a shortcut, “I don’t see the benefits outweighing the pollution, the water problems and the traffic. I don’t think it’s worth it.”

Bernie Sensale, 56, of Upper Brookville, who envisions the giant ventilation towers marring the beaches he uses and the views from his home, said “people who move here move here for a particular lifestyle. This would dramatically change that.”

Former Democratic Rep. Lester Wolff, 99, who has been battling a proposed bridge or tunnel since he was first elected in 1964, suggested that residents urge local members of Congress to support turning Long Island Sound into a marine park, to throw an additional environmental obstacle into the path of a tunnel.

Assemblyman Charles Lavine (D-Glen Cove) said the legislature would have to approve creating a special authority to develop the tunnel — and he said residents and elected officials from Long Island, Westchester and elsewhere could prevent that from happening.

“If we all stand together, this will not be accomplished,” he said of the authority and the tunnel.

Officials: Sound tunnel would 'destroy' environmentA state study says a tunnel crossing would only be viable from Oyster Bay or Kings Park. Cuomo pushes Sound tunnel despite oppositionGov. Andrew M. Cuomo is pushing forward with plans for a Long Island Sound tunnel ... Editorial: LI Sound tunnel is invitation to dream bigAfter 80 years of talking, let's all listen. Study: LI Sound bridge or tunnel could cost $55.4BA bridge, tunnel or combination of the two across Long Island Sound would cost as ...

Nassau assessments frozen for second year in a row
Hochul holding a commanding position in race for governor
Pfizer board member: Likely no COVID-19 shot for kids under 5 until at least late March
PSEG puts its plan to offer $1,000 vaccine incentive on hold
Infrastructure improvements, COVID-19 boost LIRR on-time record
1:26
The school year began with rising hopes of a new normal. Then omicron hit.
Didn’t find what you were looking for?