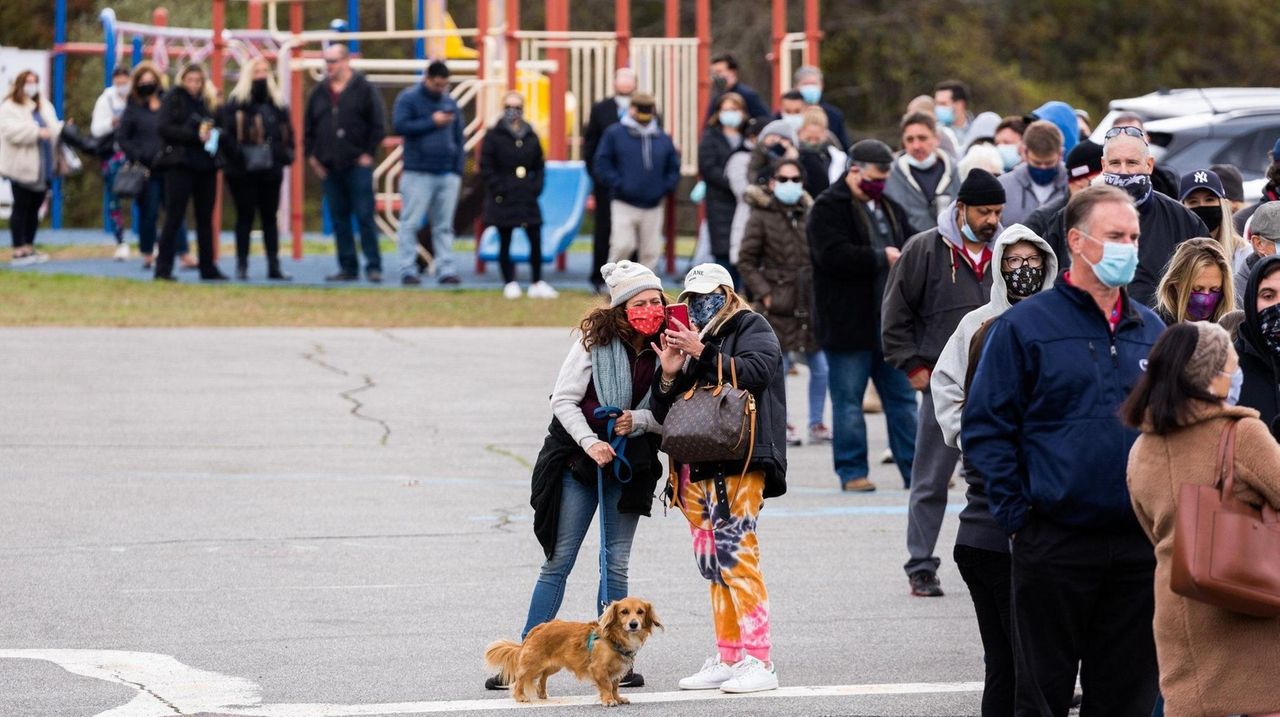 Long Islanders headed to the polls on Tuesday, braving the cold weather and some long lines in order to vote in the most contentious presidential election in decades. Newsday's Cecilia Dowd has the story. Credit: Howard Schnapp

Long Islanders headed to the polls in potentially record numbers Tuesday to vote in the most contentious presidential race in decades amid a pandemic as voters described the election as the most important one in their lifetime.

Voters interviewed said the race between President Donald Trump and former Vice President Joe Biden will decide the fundamental direction of the country. Through their ballots, they wanted to take a stand on the coronavirus, law enforcement, the economy, racism, presidential conduct and the nation’s divisions. And they came out in droves, despite pandemic fears, long lines and cold weather.

David Zuhoski, of Brentwood, said he believes voters like him came out in high numbers because the race is a "referendum" on Trump.

Nicholas Carter, 34, who voted for Biden, felt similarly that this race hit closer to home for many.

Voters said the stakes of the race were high.

"Today hinges on everything — our health and education and our children," said Angela Sposato, 55, of South Huntington, who voted against Trump for his handling of the coronavirus.

Trump supporter Ilwa Zilban, of Oceanside, said, "This is the United States of America. And we should be united as one America."

But voters interviewed said the presidential contest is what got them to the polls.

Their enthusiasm meant they were willing to wait in lines, beginning at 6 a.m. when polls opened and continuing after the sun set and the weather chilled.

At 6:15 a.m., the line to vote at the Bayport-Blue Point Public Library was several hundred people long, stretched down the street and took about two hours.

In Brentwood about 12 hours later, about 200 people waited in the dark to cast their vote at North Elementary School. Large crowds continued to pour into John P. McKenna Elementary School in Massapequa Park, a Republican stronghold.

Susan Conrad, 65, of Riverhead, said she was prepared to wait as long as it took outside Riverhead Free Library Tuesday afternoon. The Biden supporter tried to vote four times before Election Day but long lines got in her way. But on Tuesday she was in and out of the polling station in eight minutes.

"I’m so happy that so many people are coming out," Conrad said of the long lines she saw during early voting. "I think we all realized: hey, it really does matter who is in charge."

Several Long Islanders cast ballots for the first time, including Indra Salazar, 38, who waited nearly an hour at South Huntington Public Library to vote Democratic down the ballot, and Michael Wright, 18, who voted in Massapequa Park with his mother to support Trump.

Juan Santander, 43, of Hicksville, who became a U.S. citizen four months ago, said, "I feel like my vote is going to count for the future."

Rachel Hodkin, 20, a first-time voter, emerged from Archer Elementary School in Freeport with her mother, feeling good about voting "red" and "excited that I get to be a part of this and participate and support my country."

Trump supporters said they believe their candidate is the best for the economy and say he has kept his election promises and improved the United States' status in the world.

"I just love everything about Trump," April Wright, sporting a Trump mask, said in Massapequa Park. "I love everything he stands for — draining the swamp and making America great again."

Biden supporters expressed concern about another four years of Trump, whom they criticized for ignoring scientists during the coronavirus epidemic and ignoring minorities.

In Uniondale, Biden supporter Julio Portillo, 54, said, "We can make a change. And I hope this country goes back to the way it used to be, in peace with the world, working together to make a better world."

There were a few reported voting glitches, including a couple of temporarily down machines. Nassau's Scheuerman said there were reports of "sporadic" problems, partly due to a shortage of GOP inspectors who arrived for work. Standby Democratic inspectors were sworn in to replace them, he said.

Jay Jacobs, chairman of the Nassau and state Democratic parties, said there were reports that some poll watchers incorrectly asked voters to show identification at polling sites in southwestern Nassau County.

Suffolk GOP elections commissioner Nicholas LaLota said there were no longstanding issues and any machines are typically fixed or replaced within 90 minutes of breaking down.

With Jesse Coburn and Antonio Planas

Newsday Opinion endorsements 2020A look at who Newsday's editorial board is supporting this election season.

Four challengers taken off Babylon Village ballots
1:49 Forecast: Rain through Monday, then a warm up
5:01 Counties add fair housing staff, but no testing program
Insiders: Cuomo's style led to nursing home controversy
1:42 Transition to high school more troublesome because of COVID-19
1:34 Fighting COVID-19: How medical experts have faced the virus
Didn’t find what you were looking for?