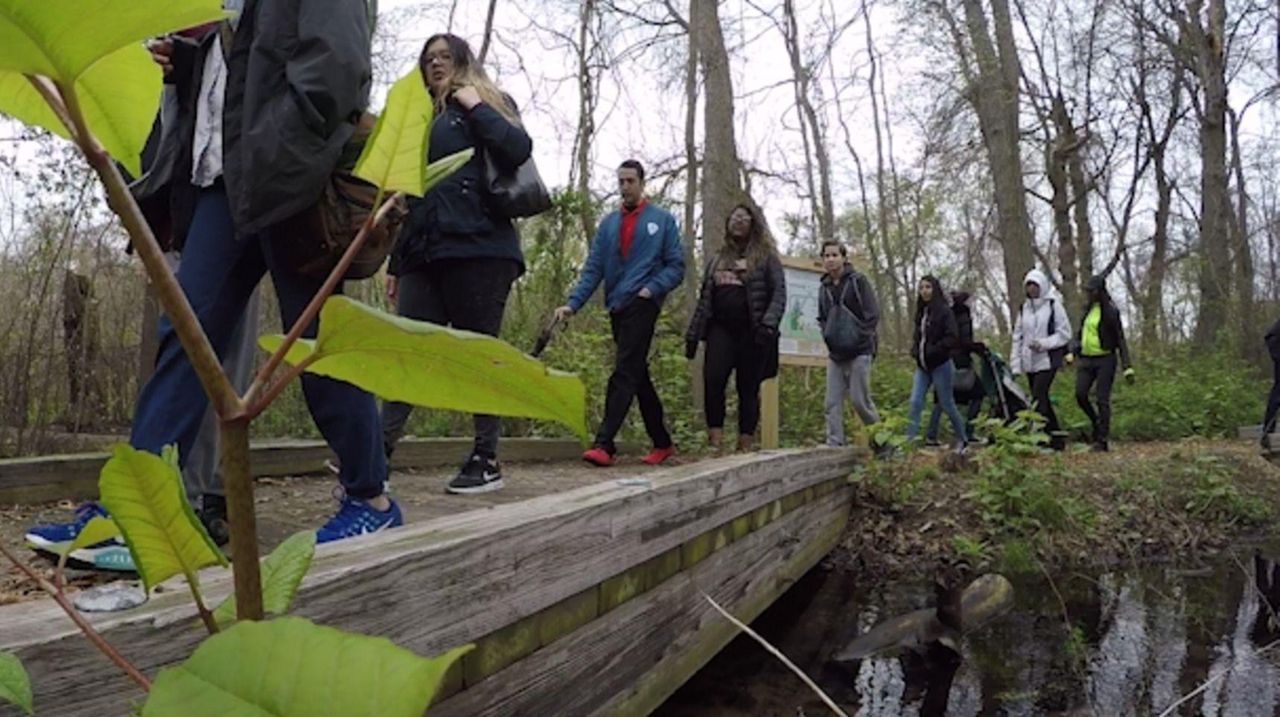 Long Islanders gathered at Tanglewood Preserve in Rockville Centre on April 22, 2017, in solidarity with demonstrations worldwide in support of science. Demonstrators emphasized the importance of re-engaging people in science in light of proposed funding cuts to research and enforcement. Credit: Newsday / J. Conrad Williams Jr.

Long Islanders assembled at Stony Brook University on Saturday, joining cities around the world where activists marched to defend science from attacks and reduced federal funding.

About 500 people — including university professors, students and staff — participated in the rally, according to Stony Brook march organizers.

“At one point I couldn’t see the beginning or the end of the line, just hundreds of hundreds stretching around the curve of the Circle Road,” said Pamela Lynne Block, a march organizer.

Among those at the rally was Bill Bauer, 71, of Dix Hills, who held several signs, including a blue-and-red lettered “Protect the EPA” poster. He said he was marching with friends and family to support the local science program and raise awareness about climate change.

His daughter Cassie Bauer once gave him a composter as a birthday present. “She said, ‘You will compost,’ ” recalled Bauer with a laugh.

Holding a “There is No Planet B” sign, Cassie Bauer, 29, of Stony Brook, said she had thought of going to the Washington, D.C. science march, but opted for the one closer to home.

“There needs to be more awareness of what science can do and what’s going on and to do a little bit better every day about how to protect the environment,” she said.

Her boyfriend, Derek Gerardi, 30, of Stony Brook, an aspiring science teacher who graduated from Stony Brook’s undergraduate program in 2011, said it was “disheartening” to see climate issues being put on the back burner by federal officials and to hear people call climate change a hoax.

However, Gerardi said he was heartened to know the Stony Brook march was one of hundreds of similar marches taking place worldwide. “We hope that something can come out of it, and we can show people in office that this many people care about what is going on . . . just to show the world and our representatives that this is an issue that people care about.”

Some marchers with children and grandchildren said they worried about climate change because of them.

“I’ll be gone when the rest of it hits, but they’re going to be around in a world that will be so very different than the one they have no,” said Mark Rabin, 75, of Melville, a former science teacher with several grandchildren,

“Climate change is bigger than anything,” Bill Bauer said. “To think that the next generation might be impacted, I just can’t believe that 100 percent of parents aren’t concerned . . . how can you say it’s a hoax?”

Despite the rain, Bob Decostanzo, 70, of East Islip, who marched with several friends, said he was pleased with the turnout. “I’m looking at it and thinking, ‘They’ll be active from now on. They’re going to vote and going to be active and all sorts of things,’ ” he said. “On a rainy day like this, people got their butts up and got active.”