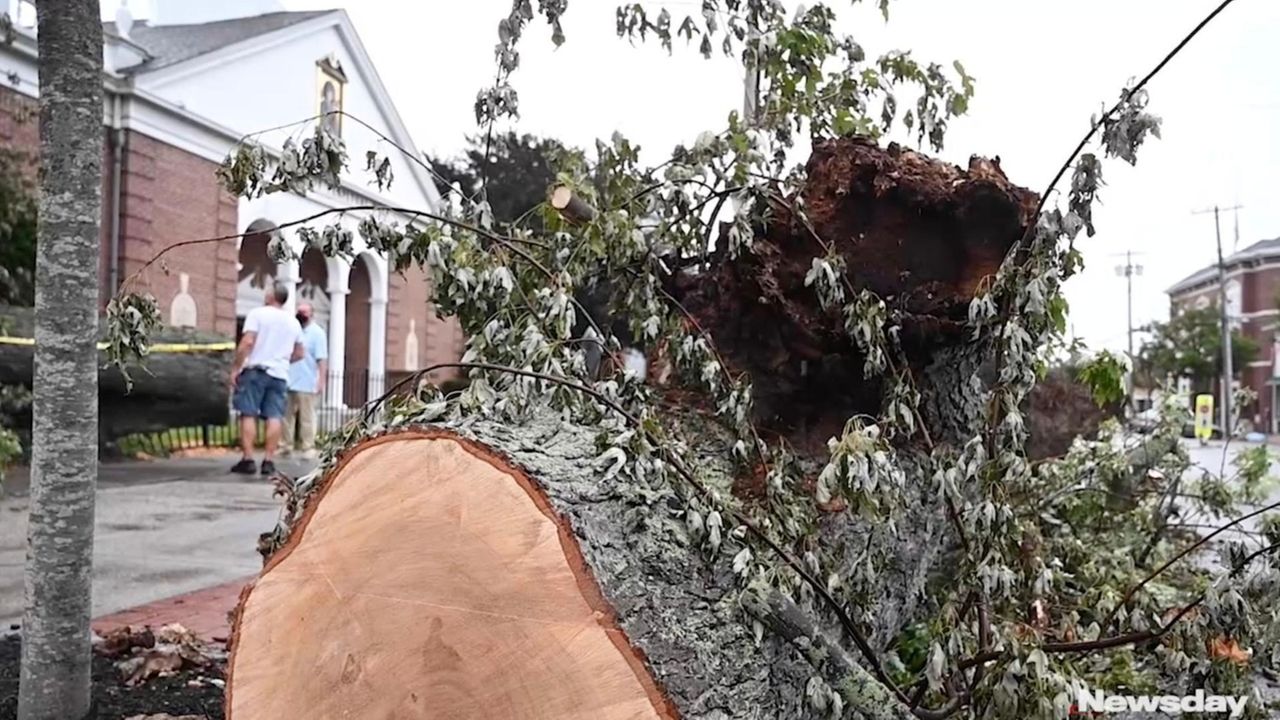 Tom Crennan, the business manager of Our Lady of Perpetual Help, in Lindenhurst, spoke to Newsday on Thursday about the cleanup after Tropical Storm Isaias knocked down a large tree outside the church.  Credit: Newsday / Alejandra Villa Loarca

This story was reported by Lisa L. Colangelo, Mark Harrington, Steve Langford, Antonio Planas and Olivia Winslow. It was written by Colangelo.

Many residents of neighborhoods hit hard by the Tuesday storm were still waiting for crews to haul away the debris and for PSEG to restore electricity to their homes.

Streets in these neighborhoods were lined with trucks from private landscapers and the air was consumed by the constant hum of emergency generators. Meanwhile, anxious residents worried about staying safe amid downed power lines and no electricity.

Anthony Migliaro, of Wantagh, stared at the remains of a massive oak tree that fell across Cornelius Avenue, landing on his car and sending wires and branches across his front yard.

“The town came right away but they couldn’t do anything because of the power lines,” said Migliaro, 58. “We tried calling [PSEG]. We couldn’t get through. The whole neighborhood tried. We just kind of gave up.”

Migliaro borrowed a portable generator from a family member that is helping power a portion of his house so he, his wife and daughter can have hot water, lights and a breeze from the ceiling fans.

“I’m just happy to have a hot shower again at this point,” he said.

In addition to being without power, Brandon and Jane Sum of Great Neck have been dealing with intermittent fires in their backyard after Isaias’ winds brought down a tree, and with it, a live power line.

“It set on fire right away,” she said. “The fire department came.”

Since then, the fire department has returned about three times to put out the fire, after the live wire reignited it.

PSEG officials told the Sums their call was considered a priority but the couple was worried about the safety of their two young children and elderly parents who live with them.

Jeff Mollins of Jericho said he watched a live wire burn part of his back lawn and ignite a tree for more than a day before it finally “sizzled out.”

But the wire is still live, he said, and neither the local fire department nor police can help until PSEG turns off the power.

The utility, subjected to blistering criticism from elected leaders on Long Island and in Albany about its performance during the storm, urged those without power Thursday to be patient — crews will get to them. PSEG officials said most outages would be fixed by Friday with other power back on by midnight Saturday.

A toppled tree “took a whole side” of Marc Newman’s Centerport home Tuesday. But on Thursday, he was more concerned about the downed power lines and tree branches strewn across the street, blocking the intersection at Glenn Crescent and Stony Hollow Road near his home — prompting him to call police.

“That’s live and people drive down this street super fast,” Newman said of the power lines on the curvy roadway. “It’s dangerous because cars are coming down and they’re coming into the oncoming lane. … Nobody can see each other because there is a sharp turn.”

Stephen Macartney, of Fort Salonga, said crews worked to restore power to his neighborhood for the first time Thursday.

Macartney said he found it “very subpar” for crews to respond to power outages nearly 48 hours after the storm.

“This is the first time I’ve seen anybody over here doing anything,” he said.

On Tuesday, a tree fell by his neighbor’s home, bringing down power lines and creating hazardous driving conditions on Bread and Cheese Hollow Road.

Macartney said he sprung to action, amid the chaos, and began directing traffic even though he was “within feet of live wires.”

“It was a little harrowing,” he said. “People don’t like to listen, you know?"

The post-storm recovery and the warm weather wasn't all bad for Macartney. He said he managed to stay cool by eating “a lot of ice cream.”

Parishioners and staff at Our Lady of Perpetual Help Roman Catholic Church in Lindenhurst were thankful a street tree, felled by Tuesday’s fierce winds, missed their beloved sanctuary by mere feet.

“It would have taken out the corner of the church and who knows how much damage it would have done,” said Tom Crennan, business manager of the church. “This is a very tight knit community and we are in the middle of the village here.”

Winds in the nearby Great South Bay clocked in at over 70 mph during the storm, helping uproot the tree, which then crushed part of the fence outside the Wellwood Avenue church.

“Thank God there were not a lot of citizens around on the sidewalk,” Crennan said.

Even in the middle of the storm, the church had to turn away a parishioner who wanted to go inside.

“These trees were blowing,” he said, pointing to several outside the church rectory. “One of these branches could have came down … we wanted to make sure people were safe.”

Bill Hughes, who oversees maintenance for the parish, said once the tree toppled, he noticed it was hollow.

“It looked like a sturdy tree,” he said. “But you can never tell.”