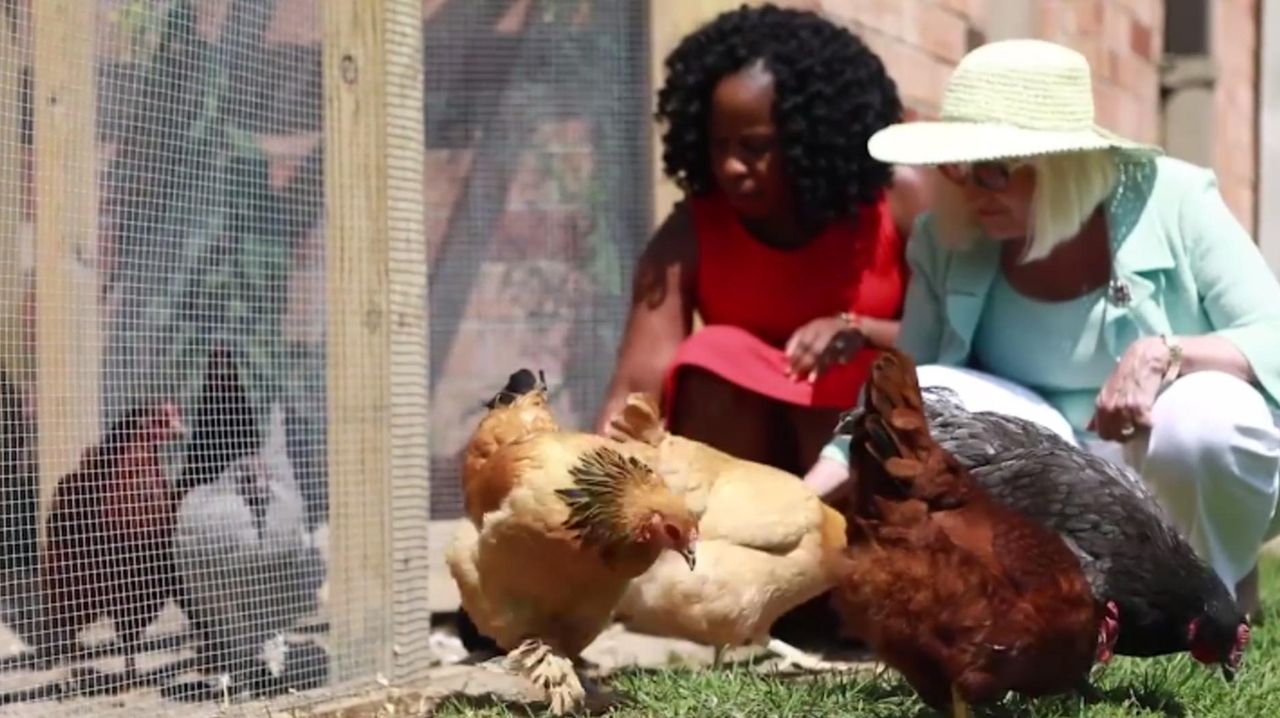 The backyard of Magnolia Gardens housing complex in New Cassel is starting to look like a minifarm. Residents are growing vegetables from a community garden built this spring with help from Cornell Cooperative Extension.  Credit: Newsday / Raychel Brightman

The backyard of the Magnolia Gardens housing complex in New Cassel is starting to look and sound like a minifarm.

Residents are growing vegetables in a community garden built in the spring with help from Cornell Cooperative Extension of Nassau County. Residents are also maintaining an outdoor chicken coop, marking the only Town of North Hempstead-sanctioned living quarters for the birds.

The chickens, ranging in breeds from Blue Orpington to Rhode Island Red, have names like Pink, Little Jeri and Muffin Top. The 10 birds live in a donated coop but are free to roam the yard, clucking and pecking at bugs on the ground.

Town officials granted Magnolia Gardens a building permit in the spring for the coop. Residents said they enjoy taking care of the birds, including feeding them and petting them.

“To us, this is a sort of therapy,” Magnolia Gardens resident Vilma Oleas said on a recent Wednesday while overlooking the roaming chickens and vegetable garden. “I love nature, and this is beautiful. You just come out here and wait for things to bloom.”

Magnolia Gardens is home to 120 residents and is one of two public housing complexes for seniors managed by the North Hempstead Housing Authority. The authority’s executive director, Sean Rainey, selected the chickens and said the agency spent $186 to purchase them from MyPetChicken.com. The birds arrived in June as chicks, Rainey said.

Residents cared for the chicks indoors until they were mature enough to live outside. The chickens can now lay eggs, which residents plan to serve during a weekly breakfast gathering.

Town Supervisor Judi Bosworth said she thinks raising chickens is a fabulous idea because it encourages residents to be social.

Bosworth, Rainey and other town officials said the chicken coop complements the Mr. Hicks Community Garden that Jesse Bell, Viola Peert, Monica Yepez, Theo Marks and other residents are tending this summer. Louis Hicks was a lifelong Westbury resident who died more than a year ago but would often maintain the grounds at Magnolia Gardens, first in his spare time and then as a part-time employee of the housing authority.

The chickens and garden also play into Magnolia Gardens’ larger goal of making sure residents are eating fresh food.

In March, the housing development became home to a nutritional program focused on promoting wellness and healthy eating. The Fresh from the Garden program is a partnership between the town and EAC Network, a Hempstead-based social services nonprofit. The initiative is a pilot program the group wants to expand to other municipalities, said EAC senior director Carol O’Neill. By offering monthly produce deliveries, nutrition talks and cooking demonstrations, the program will equip seniors with information they need to improve their health.

The program is funded by two $20,000 grants from Long Island Community Foundation and Bank of America.

The idea for a community garden started more than a year ago. Back then, a few residents planted produce in the field behind the housing complex. Magnolia Gardens resident Mattie McCloud said very few people had gardens at the time.

Cappello-Ruggiero said raised beds make a garden look neater and organized and are also easier for seniors to tend because they don’t have to bend over so much to manage the plants.

Rainey said the beds have been such a success that he plans to add 10 more plots for next spring.

“Anytime you can give a senior something to do to occupy their day, it’s a good thing,” Rainey said.

Since establishing the garden, seniors go outside more often and are sharing tips and tricks on how to raise vegetables, Cappello-Ruggiero said.

“We like to see this happen anywhere,” she said. “And we liked that they called us for help because this is what we do.”

Oleas, who is planting cucumbers, eggplants and green peppers, said she tends to her plot in the garden at least four times a week.

McCloud, who is planting cabbage, peppers and tomatoes this season, said she also tends to her raised bed twice a day. She said being in the garden reminds her of growing up in Alabama and helping her grandmother tend to their garden.

McCloud said she tends to her garden so she can share what she grows with neighbors, but she also loves watching the chickens.

“They’re really nice and their colors are psychedelic,” she said, staring out at the field. “All this is just nice scenery.”

Residents at Magnolia Gardens have 10 chickens, all of which are different breeds:

It’s known for its feathers having a silver and gray tone with a shiny hint of purple. They tend to be quiet yet affectionate chickens that lay brown-colored eggs. They have relatively larger bodies once mature, and their feathers are fluffy.

Buffs are calm and friendly, and produce a good amount of eggs. The breed hails from the United Kingdom in the 1800s. Their voluminous array of feathers allows them to survive winter months very well.

Blues are a quiet breed with good egg production. They feature loosely arranged blue or black feathers that make them look larger than they really are. They are heavy birds that can weigh up to seven or eight pounds.

Buff Brahmas are relatively larger chickens that lay brown eggs and can survive winters because of their thick feathering. They can grow to between 10 and 12 pounds.

Known for being good mothers, Blue Cochins originate in Asia. They have round bodies and soft feathers, lay large, brown eggs and survive well in the winter.

For most of its existence in the United States, this breed has been primarily used for meat production. The males can grow to 12 pounds, and the females can reach 10 pounds. The breed comes in three varieties: light, dark and buff.

Partridge Cochins are mostly bred as show birds for competition. They have feathers on their legs and are also raised as pets. The males have fluffy feathers that are orange-red tones, while the females have dark reddish and brown feathers.

Known to be competitive and aggressive, New Hampshire Red chicks grow their feathers very quickly. Males grow to be 8 1⁄2 pounds while females can be 6 1⁄2 pounds.

The chicken is Rhode Island’s official state bird. The breed has red or orange eyes with yellow feet, and their feathers are typically rust-colored. The females can lay 150 to 200 eggs per year.

These chickens have some of the most unusual feather patterns — black with a frizzled outward curve. Black Frizzle Cochin Bantams make good pets and good mothers. They come in red and white varieties as well.