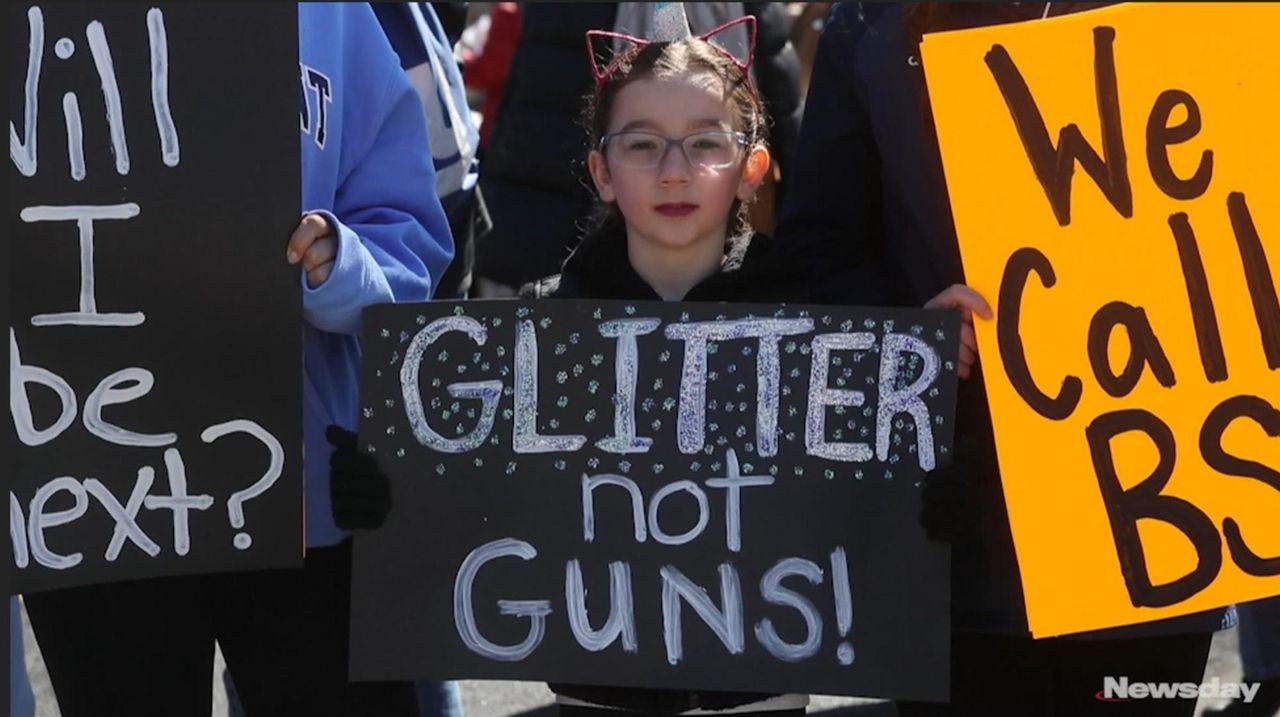 Thousands of Long Islanders, including children, grandparents, educators and religious leaders, came out on Saturday to speak their minds about gun control in the wake of the Parkland, Florida, school shootings. Newsday visited rallies from Huntington to Port Jefferson to Long Beach and Farmingdale to capture what they had to say. Credit: Newsday / Raychel Brightman / Megan Miller and Ed Betz and Randee Daddona

Thousands of protesters, some toddlers and grandparents, others educators and religious leaders, filled the streets from Port Jefferson Station to Port Washington on Saturday to amplify a single message — a demand for stiffer gun control legislation.

Students spearheaded March for Our Lives events in a show of unity with Parkland, Florida, school survivors and support their call for stricter gun control. The main rally was held in Washington, D.C., and spawned more than 800 satellite events across the globe just weeks after the Valentine’s Day mass shooting that killed 14 students and three teachers at Marjory Stoneman Douglas High School.

School safety was a common refrain among protesters and elected officials.

“Today, thousands of students across the country have come together to speak up and demand action so they no longer must fear for their safety,” Suffolk County Executive Steve Bellone said in a news release. “Our young people have become courageous leaders who have inspired a nation, and their voices must be heard.”

Nassau District Attorney Madeline Singas said she has teenage twins and when she sends them to school, “I pray that today’s not the day.”

Sara Blau, a student at Schechter School of Long Island in Jericho, attended the rally at Farmingdale State College and told the audience, “We care about the safety of our friends and classmates, whose lives are in danger.”

About 1,000 people gathered behind Huntington Town Hall on Saturday to demand stiffer gun control regulations in a student-run rally organized in the wake of the Parkland shooting.

“We are young, we are ready and we are here,” said Avalon Fenster, 16, of Dix Hills, a student at The Stony Brook School and one of the protest organizers.

“The time is now,” Fenster told the energetic crowd. “We say enough is enough.”

“When adult politicians can’t keep you safe, you take politics into your own hands,” former Rep. Steve Israel told the crowd. “If they don’t listen, you scream louder.”

The speakers included Melissa Zech, whose brother, Dix Hills-raised Scott Beigel, was among the teachers killed in Parkland. Zech praised the students leading the protests in Huntington and around the country.

“It will be because of you that my brother, my hero, did not die in vain,” she said.

The student speakers described the shooting as a call to action.

“Never before this movement have I truly understood the importance and impact of civic engagement,” said Sarah Kopp, 18, a senior at Cold Spring Harbor High School. “Our voice and our actions matter in a way that our nation was not ready for.”

“Do I believe in universal background checks?” asked Salerno, of Glen Cove. “Absolutely.”

He said he also believes people who might misuse firearms should be banned from purchasing and possessing them and suggested that combat veterans should guard schools.

“At the same time I don’t want anybody taking any of my guns away from me,” added Salerno, whose son is a service member.

The short march from the school to downtown drew as many as 1,000 people, according to unofficial estimates. Student leaders honored those slain in the Valentine’s Day shooting at Marjory Stoneman Douglas High School by reading their names aloud.

In addition to urging everyone to vote, student organizer William Casale, 17, called for “unifying programs” to break down walls between peers and end the alienation that seems to drive student shooters.

“I am here because my students deserve better,” said Jason Laskin, 23, of East Meadow, who teaches kindergarten and first-grade special-education students at Western Suffolk BOCES in Huntington Station and held a sign that read “Fund Our Schools Not the NRA.”

“It says in the Talmud the world is saved with the breaths of our children,” said Rabbi Irwin Huberman of Glen Cove’s Congregation Tifereth Israel.

The Rev. Roger Williams of Glen Cove’s First Baptist Church quoted the U.S. Constitution, saying its phrase “to form a more perfect union” governs the context for all the amendments that follow. The Second Amendment covers the right to bear arms.

The rally ended with the crowd joining in as a folk singer sang the lyrics to Michael Jackson’s “Man in the Mirror,” a song that suggests change starts with oneself.

Santa Claus brought kindergartner Aubrey Kantor a GPS smartwatch for Christmas last year, but she knows it’s not a toy. It’s so her parents, Krista and Ron Kantor of Rocky Point, can find their 5-year-old daughter in the event of an emergency like a school shooting.

“It really hits close to home when she’s telling us about active-shooter drills,” said Krista Kantor, 32.

The Kantor family — along with more than 1,500 other protesters — attended the March for Our Lives rally at Farmingdale State College, sponsored by Rep. Tom Suozzi (D-Glen Cove) and scores of students who called for gun control legislation and reform.

Suozzi led the crowd in chants of “Enough is enough!” as the students, wearing orange shirts to signal their hope for gun law reform, passed out petitions to send to elected officials in Washington, D.C.

The speakers touched on the need for tougher legislation, the awakening of students after the Parkland shooting and the safety of schools and communities. They also criticized the National Rifle Association and elected officials who do not support gun control.

“Mental illness does not equal violence,” Jeff Reynolds, president and chief executive of the Mineola-based Family and Children’s Association, said. “We have to make sure that it’s easier to get mental health treatment than it is to get a gun.”

“I still don’t know where to hide in half of my classrooms,” said Chloe, an eighth-grader at Carle Place Middle & High School.

A crowd, at least several hundred deep, gathered Saturday afternoon at the intersection of Routes 347 and 112 and chanted “Enough is enough!” and “Save our kids!”

Many were parents, grandparents and retirees, but it was the children who took the lead.

Teenagers and other young people climbed one by one into the back of a pickup truck to read from their notes and speak from the heart.

An 11-year-old told of the horror of having to go through lockdown drills. A 17-year-old criticized politicians who are more responsive to the NRA than to their concerns. Another 17-year-old reminded anyone listening that these young people will be voters soon.

Maya Peña-Lobel, 16, an 11th-grader at Ward Melville High School in East Setauket, joined others in vowing nonstop political action until politicians hear them, or they’re voted out.

Dozens of counterprotesters across the street waved American flags and signs defending their Second Amendment right to carry weapons, but they were largely outnumbered.

“The Second Amendment will also protect our children,” said Grace Colucci, 59, a legal secretary from Commack. “Guns are a tool; people are the weapon, so we need to make sure we are addressing the problems at hand,” which she said are taking guns from criminals and addressing mental health issues in schools.

Many among the protesters were not persuaded by those arguments.

“The solution is to get rid of assault weapons,” said Steve Berner, a retired schoolteacher from Shoreham. “There’s absolutely no purpose in life for those. All these guys that want to buy assault weapons, let them join the military, and then they get to be like real men.”