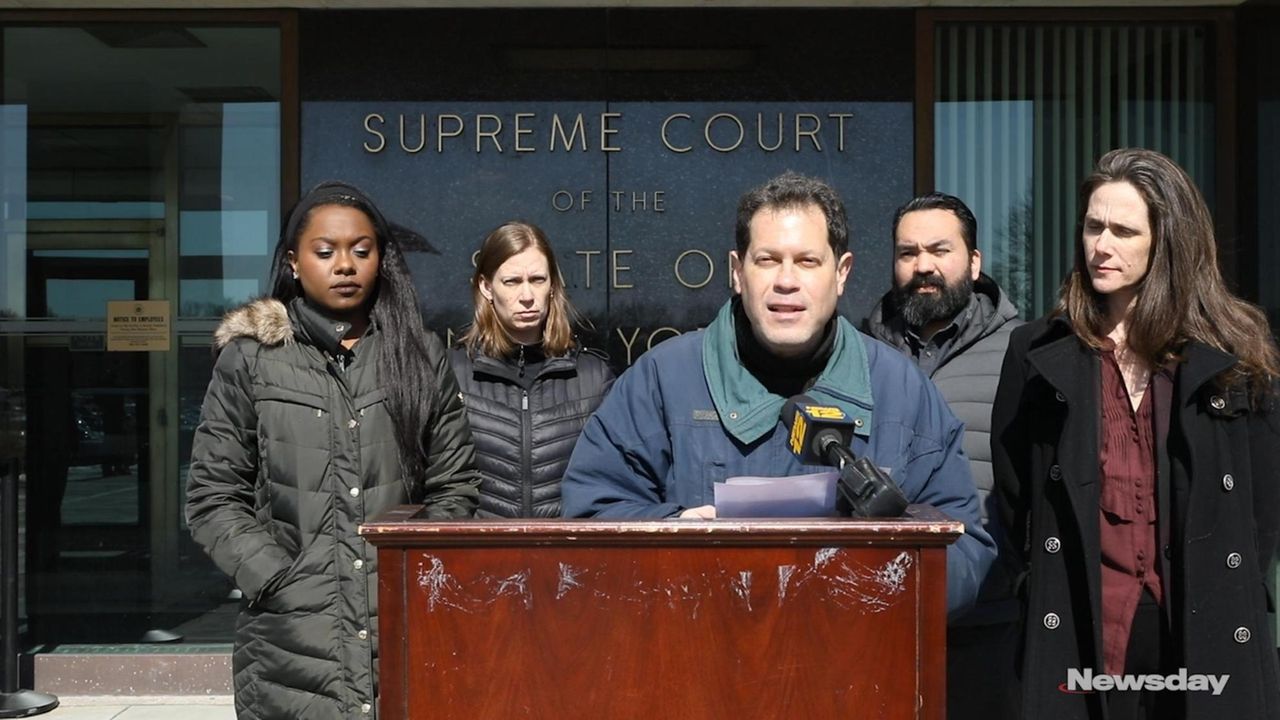 On Tuesday, Doug Greene of Empire State NORML and the Start SMART New York campaign coalition, spoke at a news conference at the state Supreme Court in Mineola, regarding a report that Nassau and Suffolk counties have the highest rates of low-level marijuana possession arrests in the state outside New York City, impacting minorities four times more than whites on Long Island and statewide. Credit: Marisol Diaz-Gordon

Nassau and Suffolk counties have the highest rates of low-level marijuana possession arrests in the state outside New York City, impacting minorities significantly more often than white people on Long Island, a pro-legalization coalition has found.

In Suffolk, blacks and Latinos accounted for 66 percent of marijuana possession arrests in 2017, and were 29 percent of the population, according to a report by Start SMART NY, which is comprised of community-based groups pressing for criminal justice reform in New York.

Whites were 69 percent of the population in Suffolk and accounted for 32 percent of marijuana arrests.

In 2017, there were 23,086 people arrested statewide for low-level marijuana possession, of whom 81 percent were black or Latino, according to the report.

“Marijuana arrest rates for nonwhites was four times the arrest rates for whites across Long Island,” said Lisa Tyson, director of the Long Island Progressive Coalition, one of the advocacy groups. “Racial disparities are not only seen in arrests but they are also presented in prosecutions and how cases are charged by district attorney offices and carrying them into the courtroom.”

The report comes as Long Island municipalities are holding hearings and town hall meetings to consider the implications of legalization in their communities.

Gov. Andrew M. Cuomo has introduced a $300 million plan to legalize recreational sale and use of marijuana statewide. He says legalization would help end "needless and unjust criminal convictions" for possession, which he said have affected minority communities disproportionately.

On Tuesday, a proposal introduced in Suffolk to opt out of Cuomo’s proposal drew mixed reactions from a nearly dozen residents who testified at a public hearing.

Others drew from personal experience in expressing concerns about the impact on young people.

”I’ve watched people with my own eyes with impaired memories, their coordination is off and they have difficulties speaking,” said Angela Huneault of Flanders.

Others said the county Legislature said a local ban should be put before voters in a referendum. “Any yes or no, in or out, should be decided in a public referendum,” said David Falkowski of Sag Harbor.

Cuomo wants the State Legislature to adopt legalization as part of the state budget by April 1. Counties and cities with populations of more than 100,000 could opt out of the legalization program.

But Jeffrey Reynolds, president of Mineola-based Family and Children's Association which runs addiction treatment centers, said, “while the continued disparities associated with marijuana arrests are disconcerting to say the least, it’s not clear that legalization eliminates racial disparities in the criminal justice system."

Reynolds pointed to a report by a Colorado state agency that found four years after marijuana was legalized in the state in 2014, blacks still were still arrested three times as often as whites for underage use, unlicensed sales and public consumption.

He said in Alaska, where marijuana became legal in 2015, a report by a nonprofit drug policy group found blacks still were arrested 10 times as often as whites.

Interactive: Data shows arrest outcomes differ by raceMinorities were more likely to land behind bars than whites for the same charge, data show — even when more whites were arrested.