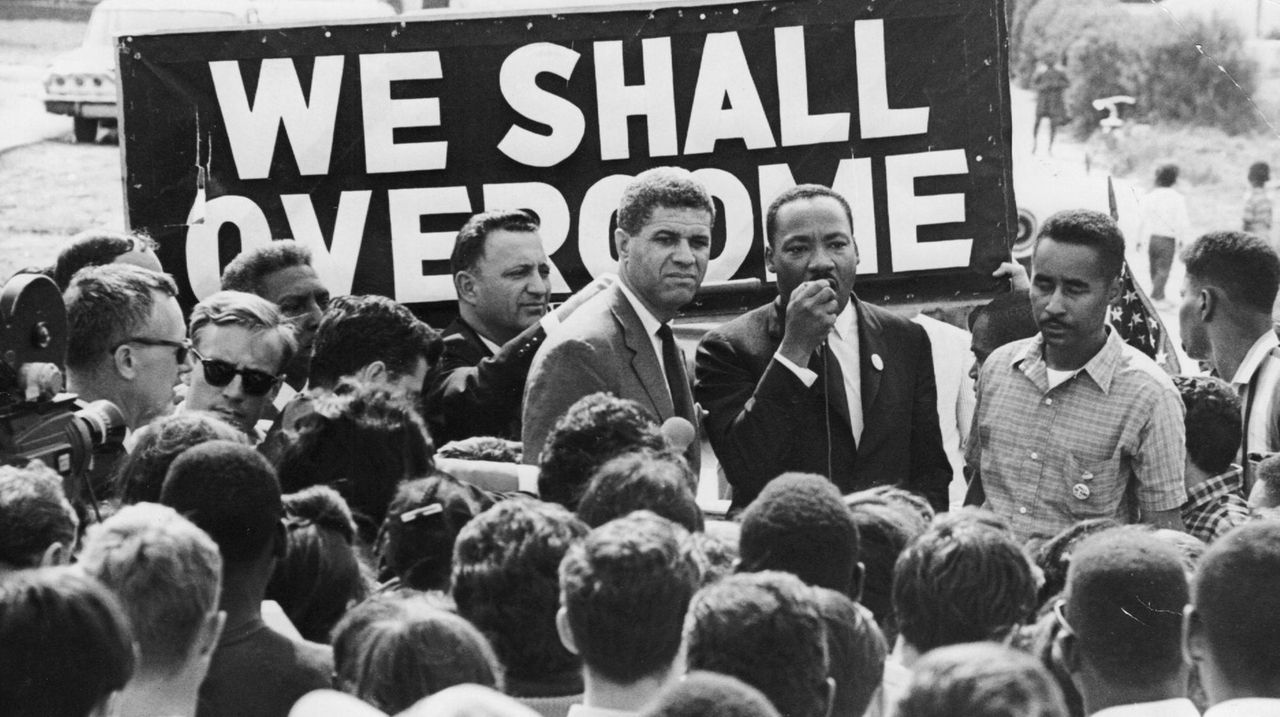 The soaring oratory appeared to resonate for miles — the crowd transfixed by the Rev. Martin Luther King Jr.'s melodic cadence as he delivered a seething rebuke of the nation's income inequality and promised a revolution to deliver equal rights to millions of Black Americans.

Mary Ann Fox of Ridge never forgot that moment more than 56 years ago as she watched King deliver the commencement address and receive an honorary degree at Springfield College in Massachusetts, only one day after the civil rights leader was released from a Florida jail.

"He spoke very softy and didn't really have to raise his voice to get his point across," said Fox, 77, a retired travel agent who was in the audience on June 14, 1964, to see her future husband, George Fox, accept his diploma. "All these years later, I remember that he said, 'Don't be like Rip Van Winkle. Don't sleep through a revolution.' And that stuck with me all these years."

As the nation prepares to honor King on Monday, Fox recalled how his message, delivered on that warm Sunday afternoon, helped steer her moral compass toward peace, equality and racial justice — during a time of war and civil unrest in the country.

King had decamped to St. Augustine, Florida, a seaside tourist town, to speak at rallies in support of the landmark Civil Rights Act, which would be signed into law only weeks later.

But on June 11, 1964, King was arrested on the steps of the Monson Motor Lodge for trespassing when he and 16 supporters attempted to eat at a restaurant that had a whites-only policy.

The following day, Springfield College president Glenn Olds threatened to fly school officials more than 1,000 miles south to St. Augustine to have King record the graduation speech from behind bars.

"We will broadcast King’s commencement address, not only to our students, but you will have a real national audience," Olds would later tell The Atlantic. "This will give you some real visibility. You’re holding King because he sat at a lunch counter … in America!"

Authorities, possibly fearing the attendant publicity, released King on $900 bond after he spent a single night in the St. Johns County Jail and another in a Jacksonville-area jail, where he was moved because of fears for his safety.

'Either nonviolence or nonexistence'

King arrived in Springfield under heavy police guard as dozens of threats had been made against the civil rights leader. Records show an FBI agent urged Olds — unsuccessfully — to retract King's invitation.

Meanwhile, a wealthy school benefactor, who was prepared to leave the university $1 million in his will, ceremonially ripped up a check when Olds refused to disinvite him.

King's 31-minute commencement address included his classic rhythm and pacing, his familiar use of repetition, and covered a wealth of territory — from poverty and rampant militarism to segregation and pacifism. At one point in the speech, King noted that "it is no longer a choice between violence and nonviolence. It is either nonviolence or nonexistence."

And King would return repeatedly to the idea of bringing about a revolution that would sweep out the old order while bringing structural change to the nation.

An appearance at Hofstra

The following year, King would come to Long Island, again under threats of violence, protests and heckling, to deliver the commencement address and accept an honorary degree at Hofstra University.

Mike D'Innocenzo, Hofstra's professor emeritus of history, was in the audience at the time, serving as the Harry Wachtel distinguished professor for the study of nonviolent social change.

"He emphasized the triple evils — that we need to deal with racism, war and poverty. That there is a symbiotic relationship between all three of those evils," D'Innocenzo said. "And that it's not just an American issue. It's a global issue."

King's words, he said, ring even louder following the deadly siege at the U.S. Capitol by armed insurrectionists on Jan. 6.

"King never strayed from the principle of nonviolence," D'Innocenzo said. "He believed that Americans had a right to protest and seek reform. But how you did it was critical."

Fox said she has returned to King's speech often since the events of Jan. 6 and wonders how the nation would be different if he were still alive today.

"This was a man who spoke of peace and harmony in our country and how we should all come together. And by God those words certainly apply today," she said. "More than ever those words resonate with me today."

Insiders say miscalculations, Cuomo's style led to nursing home controversy
1:34 Fighting COVID-19: How medical experts have faced the virus
1:13 Advocates step up COVID-19 vaccination efforts in Latino communities
Trump's legal troubles grow even though he's out of office
How to get a COVID-19 vaccine appointment
Four challengers taken off Babylon Village ballots
Didn’t find what you were looking for?