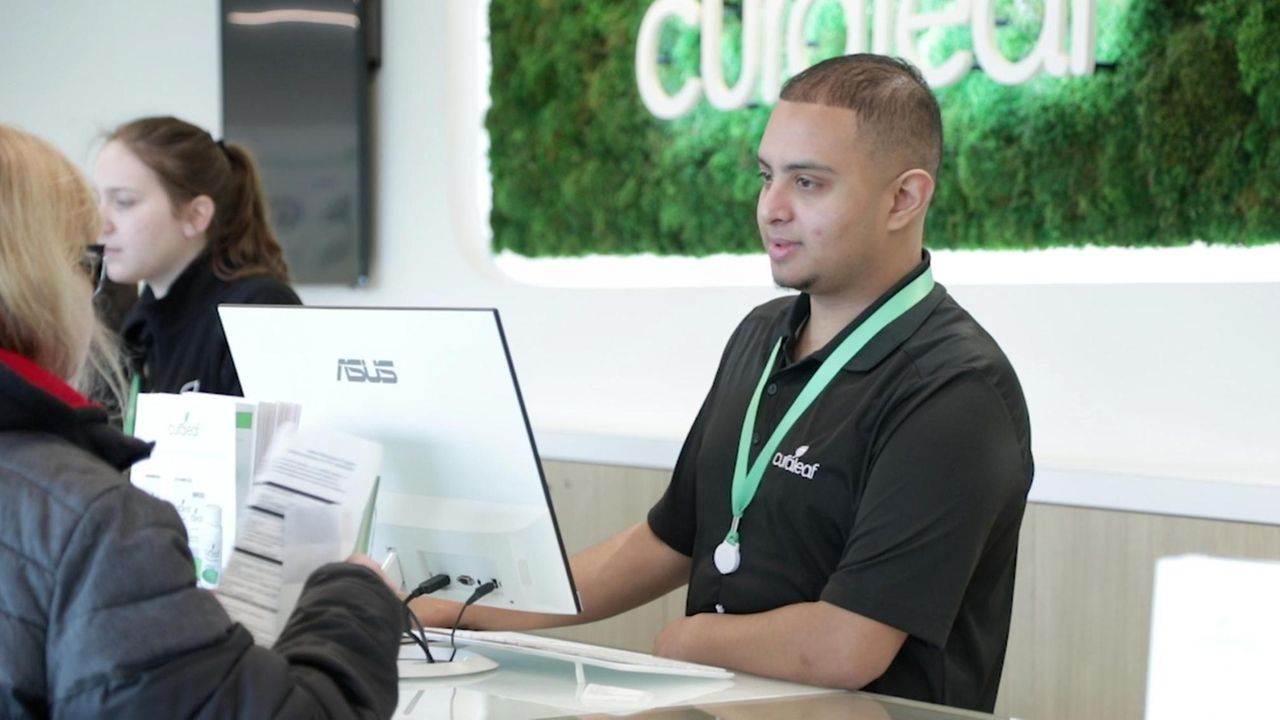 Curaleaf opened a marijuana dispensary in Carle Place on Friday, its first on Long Island and its fourth in New York State.  Credit: Newsday / Yeong-Ung Yang

Borutecene, 41, for a decade had taken the powerful painkiller Vicodin to treat a knee injury, but he said it made him a “walking zombie.” Cannabis, he said, allows him to function normally.

“Without this medicine I don’t think I would have been able to move on with my life,” said Borutecene, who recently moved from Williston Park to Howard Beach, Queens.

At least 150 people were expected to visit the 3,500-square-foot facility Friday and Saturday, said Mike Conway, director of dispensary operations for the center, which is owned by Massachusetts-based Curaleaf. The dispensary is the company’s 36th in 12 states.

The dispensary is the first to open on the Island since the first two — one in Lake Success, the other in Riverhead, each owned by different companies — began operating in January 2016, when medical cannabis centers were first allowed in New York. It’s part of a state-approved doubling of the number of medical dispensaries statewide from 20 to 40.

One more dispensary is slated for Nassau County, and two for Suffolk County, according to the New York State Department of Health. Representatives of the three companies approved to run the dispensaries did not respond to requests for comment on their precise locations.

The Carle Place center sits amid strip malls and small shopping centers, and across the street from a residential neighborhood.

Patients must get buzzed in through two doors before entering the light and airy space. Under a glass-topped counter are cannabis products that can be taken in capsules, by vaping or by placing drops under the tongue. New York prohibits smoking marijuana or using it in edible forms.

Patients can ask trained “dispensary associates” about dosages and which type of cannabis product is best for their conditions. The cost depends on the product, dosage and frequency of use. One hundred fifty milligrams of inhalable cannabis in a “slim vape pen” costs $25, and 1 milligram doses are typical, with one to three inhalations every four to six hours, Conway said.

Patients first must get certification from a doctor or medical practitioner registered with the state stating they might benefit from cannabis. Cancer, AIDS, multiple sclerosis and chronic pain are among the conditions for which cannabis can be used to treat under state law.

The State Legislature is expected to vote this year on a measure to legalize the adult recreational use of marijuana, a proposal that has the backing of Gov. Andrew M. Cuomo.

Michelle Bodner, president and CEO of Curaleaf New York, said if that happens, Curaleaf would “look at our options.” Curaleaf sells recreational marijuana in Oregon, she said.

Kimberly Arezzi, 45, of Farmingdale, is both a patient and dispensary associate employee of Curaleaf. She also does public outreach for Curaleaf, to tell her story.

Arezzi has an autoimmune condition that can make it impossible to stand or grasp objects. She said her doctor recommended medical cannabis before legal sales began in 2016, but she couldn’t afford it because it’s not covered by her insurance. When she found more affordable cannabis in 2017, she switched to it from a 20-pill cocktail of drugs. Arezzi said it is more effective and doesn’t damage her liver and kidneys, which some of the other medications do.

“I was looking to find a way to make this condition manageable so I can move forward,” Arezzi said. “For me, that means I don’t have chronic pain. I don’t have shooting pain through my body. My skin doesn’t feel like it’s on fire. I just have a dull ache that runs through my body, and I’ll take that any day of the week over sitting and crying in pain.”

Borutecene said Vicodin is more effective against his pain than cannabis. But “when you’re on Vicodin, you’re just numb to the whole world,” he said.

With cannabis, Borutecene can regularly exercise again. He can communicate with family and friends. He said he’s not aggressive like he sometimes was on Vicodin.

“This medicine is saving my life,” he said.