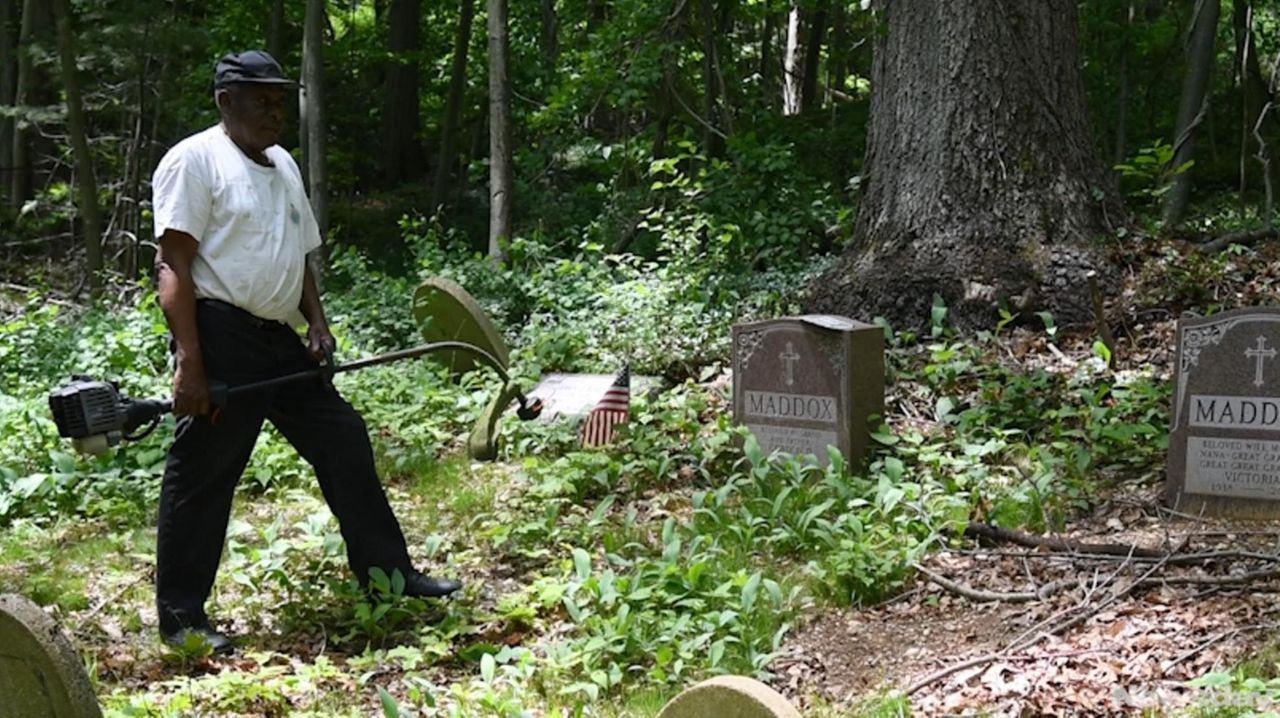 James “JK” Green is a volunteer caretaker at Pine Hollow Cemetery in Cold Spring Harbor, a job that he took over from Gordon Maddox decades ago. Credit: Corey Sipkin

In the days before Memorial Day’s pause to remember the graves of America’s war dead, James K. Green, 79, trudged among weathered tombstones that dot a tree-shaded hillside outside of Cold Spring Harbor, and pointed to the graves of black Civil War soldiers buried there during the long era of segregated military graveyards.

Most of the names cannot be read on the ancient tombstones, which jut akimbo from the earth. One exception is that of David Carll, a Union Army private who was shot through the lungs while serving with the 26th United States Colored Infantry, but who lived to raise a family 200 yards from where he is buried. The other stones are mostly unidentified, except for the cast-iron five-pointed stars that designated the graves of Union soldiers after the Civil War.

Green is one of a dedicated group who tends these graves and others like them in tucked-away locations scattered across Long Island, saying it is important to honor all those who served their country, and to counter the forces of time and segregation that conspired to erase some names from the pages of history.

“Almost everyone from Oyster Bay served in the military, and their graves need to be taken care of,” said Green, a member of Oyster Bay’s Hood AME Zion Church, whose dwindling congregation cares for the Pine Hollow Cemetery. “My church has only 40 members, but we try to keep it looking good.”

“There are a lot of World War II veterans who were buried here, but a lot of them we don’t know because we lost the records,” said Green, who served in the Marines in the late 1950s and goes by “JK.” “There was segregation then, so they were buried here.”

For much of America’s history, black war veterans were largely overlooked on Memorial Day because the nation’s military cemeteries — including Arlington National — were mostly segregated until after World War II. Black families often refused to bury loved ones in the few segregated sections they were offered, choosing instead to bring their veterans back to local church graveyards or private family plots.

As America’s military cemeteries grew swiftly in the late 1860s, to accommodate the hundreds of thousands who served in the Civil War, War Department cemetery records show that burial-ground sections were often designated as “white” or “colored,” an informal policy that survived into the late 1940s.

Segregated military cemeteries became widespread even though it was never explicitly mandated in military regulations, according to Jennifer M. Perunko, a historian for the National Cemetery Administration. “Segregation followed from local traditions, most prominently at Arlington,” Perunko said.

But pressure built to end the practice in the 1920s and 1930s, as families of the 350,000 black troops who served in World War I demanded an end to Jim Crow practices that extended even to the graveyard.

The War Department explicitly banned further segregation in national cemeteries in 1947. “ . . . [I]nterment will be made in size 6- x 12-foot grave sites without distinction as to race and rank,” read a War Department directive issued in September 1947.

Long Island National Cemetery opened in 1937, and from its inception, black veterans appear to have been accepted and buried at locations across the sprawling grounds, according to Perunko.

One black veteran whose remains are at the cemetery is Richard Fowler, one of seven Fowler brothers from Oyster Bay who served in Europe with the 369th Infantry — the Harlem Hellfighters — during World War I. He was buried there in 1948.

The cemetery also holds the remains of two black soldiers who were awarded the Medal of Honor: Pfc. William Thompson, who was killed while defending his platoon during the Korean War; and 1st Lt. John Earl Warren Jr., who was killed in Vietnam in 1969.

The hidden hollows and old churchyards on Long Island that hold the remains of African-American veterans also include Calvary AME Church Cemetery, where black veterans of the Spanish-American War and World Wars I and II were laid to rest near Piping Rock Road in Locust Valley. One marker there reads: “Bart Fowler Pvt. 369 Inf. 93 Div. December 7, 1941 P.H.”

Without the upkeep provided at federally funded national cemeteries, many of these private graveyards were forgotten over time, as relatives died off, and as church congregations that once tended them moved away.

“ . . . [D]own Piping Rock Road and nearly engulfed from sight in underbrush, is a cemetery founded in 1863 for the use of black people,” journalist Edith Hay Wyckoff wrote in 1978. “For years various attempts have been made to get this cemetery cleaned up. All have failed.”

But the efforts of civic groups, historical societies and church congregations spanning races and cultures have restored some of these burial grounds in recent years.

Pine Hollow, the burial ground Green helps tend, now has a brick entryway with a plaque listing the names of 11 members of “Colored” Civil War regiments buried there.

In 2000, Laurel Hollow’s Matinecock Neighborhood Association organized a cleanup of the cemetery on Piping Rock Road, clearing away trash that hid in thick underbrush.

For years after that, the nearby Friends Academy regularly sent its maintenance department to the site to mow.

“It had become so overgrown you wouldn’t realize it was a cemetery,” said Deb Schoman, principal of the academy’s middle school.

Bob Bitter, a textile designer who has lived much of his life in Laurel Hollow, said he considers the old burial ground to be a historic asset.

“I didn’t realize so much history is buried there,” said Bitter, who moved next to the Piping Rock cemetery about five years ago, and helps pick up litter that sometimes is tossed from passing cars. “It is a peaceful spot, and a part of our country’s story, as it should be.”