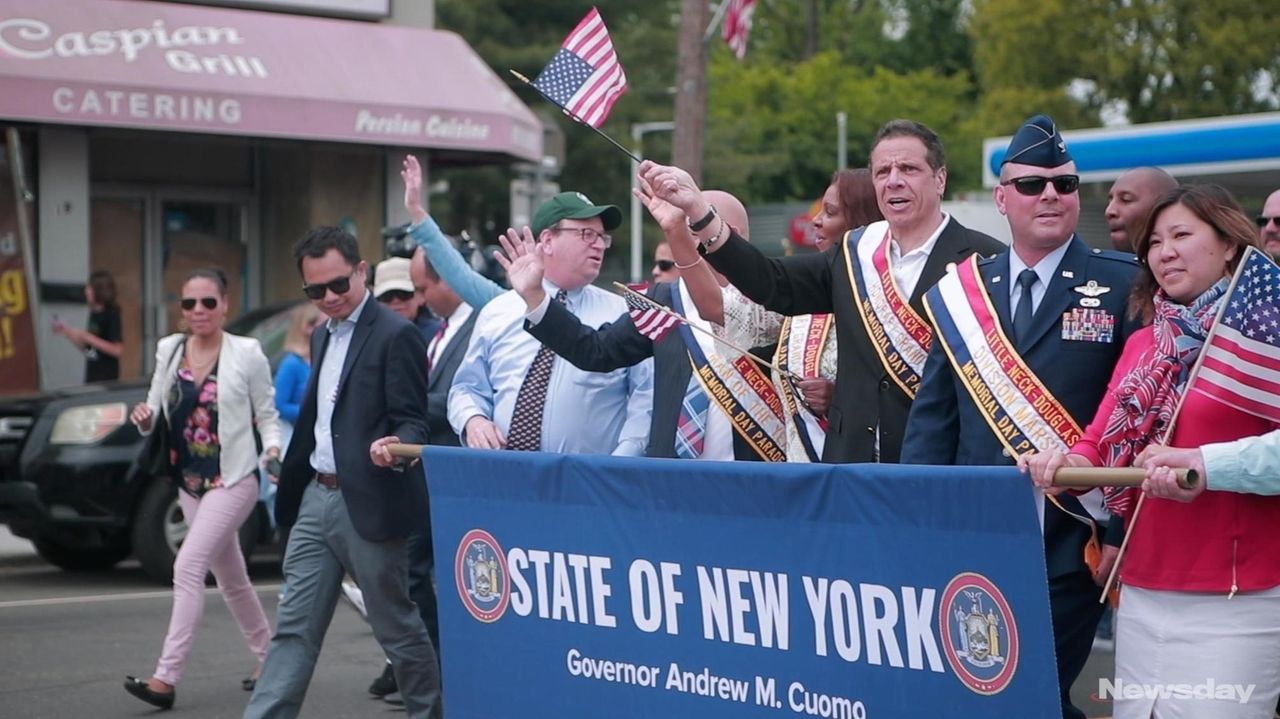 On Monday, Gov. Andrew M. Cuomo and other lawmakers marched in the Little Neck-Douglaston Memorial Day Parade as paradegoers shared their thoughts on what the holiday means to them. Credit: Newsday / Raychel Brightman

Long Islanders in Port Jefferson, Glen Cove, Smithtown and many other communities joined elected officials, veterans and New York City residents Monday in colorful parades and reverent observances to honor men and women who died during military service to the country.

“Today is a sacred day,” said Bill Wolf, commander of the American Legion Wilson Ritch Post 432 based in Port Jefferson Station, at Veterans Memorial Park in Port Jefferson. “For all the people that fought for our freedom.”

Wolf recalled his younger brother, Michael, who would have turned 67 Monday and who enlisted in the U.S. Army during the Vietnam War to follow in Wolf’s footsteps.

Memorial Day services around Long Island honor fallen troops On Monday, friends and family members who died while serving their country were on the minds of those who gathered for a Memorial Day service in Port Jefferson and Garden City, while the Village of Farmingdale held its annual Memorial Day parade, sponsored by the Farmingdale Fire Department. (Newsday staff)

But the younger Wolf never made it home alive. He is buried at Long Island National Cemetery in Pinelawn.

Other displays of respect for the military personnel who fought and died took place across the length of Long Island and into Manhattan.

At the Intrepid Museum on Manhattan’s west side, New York City Mayor Bill de Blasio joined Rep. Carolyn Maloney (D-Manhattan), Secretary of Transportation Elaine Chao and 102-year-old Lt. Col. Richard Cole — the last of the Doolittle Raiders — in laying wreaths on the Hudson River in remembrance of those killed in past and current wars.

Wearing a sash that read “Marshal,” Cuomo smiled at applauding onlookers and waved a small American flag. He stopped to pose with others for selfies and to shake the hand of an elderly veteran.

“Thank you for your service,” Cuomo said to the veteran, before rejoining the march and later heading to Great Neck for the Little Neck-Douglaston parade.

Other Long Islanders, like Gordon Haner of Mount Sinai, were just as grateful for the contributions of those who perished in wars throughout U.S. history. He paused to honor friends who served as well as all of the nation’s war dead.

“I just come down to pay my respects, that’s all,” he said, remembering two classmates who he said died in the Vietnam War. “It’s the right thing to do.”

Ron McClean of East Setauket served in the U.S. Navy for 22 years, including during the Gulf War. It was an experience that kept him away from the U.S. mainland for more than a decade, but enabled him to travel the world and forge deep bonds with his fellow service members.

“We’re all brothers,” he said. “It brings back a lot of memories. The people you worked with, the people you shared your life with who are no longer here.”

In Smithtown, war veterans were honored in marching bands, church groups, elected officials, twirlers and others who made their way down Main Street for the Memorial Day parade there.

At least 18 Medal of Honor recipients have LI ties

Frank DeModna of Smithtown wore a shirt in remembrance of his friend Master Sgt. Christopher Raguso, an FDNY firefighter and father of two from Commack who was killed in Iraq in March.

Raguso was one of seven men — one of four from the New York Air National Guard’s 106th Air Rescue Wing in Westhampton Beach — who were killed when their helicopter crashed March 15 near the Syrian border.

“I’m here to show respect for all of the men and women who served to protect our freedom,” said DeModna, whose shirt read “Here I am, send me, so others can live.”

In Garden City, about 150 people watched a Memorial Day-theme parade that featured school bands and appearances from the village’s board of trustees. Afterward, residents gathered at the gazebo on Seventh Street across from the Garden City Hotel to hear a local veteran pay tribute to fallen soldiers.

Frank Tauches, a retired colonel in the Marine Corps Reserve, read aloud the names of the 61 Garden City residents who died while in service, most of whom served during World War II.

“This continues the legacy of the service members who really laid the foundation for our continued freedom,” said Tauches, a former Garden City mayor. “It’s one of the events that brings us all together and it really brings the families out.”

Patricia Giordano of Garden City has attended the village’s parade for 48 years. She said the memories of her uncles and great-uncles serving in the Army and fighting during World War II bring her back every time. She noted specifically her uncle Jack Ortino who fought in the 1944 Battle of Anzio.

“Fortunately, they all came back,” she said. “And I’m so proud of them so I come to honor them.”

Memorial Day ceremony honors 'American heroes'Hundreds of thousands of military veterans were honored during a rainy Memorial Day weekend ceremony ... After 'Flags In,' volunteers needed for pickupThousands of volunteers to place graveside flags, but help is also needed to pick them up. LI veterans recall service in Battle of the BulgeThe men, who are now in their 90s, describe the tragedy they witnessed during World War II's Battle of the Bulge, one of the deadliest operations in American history.