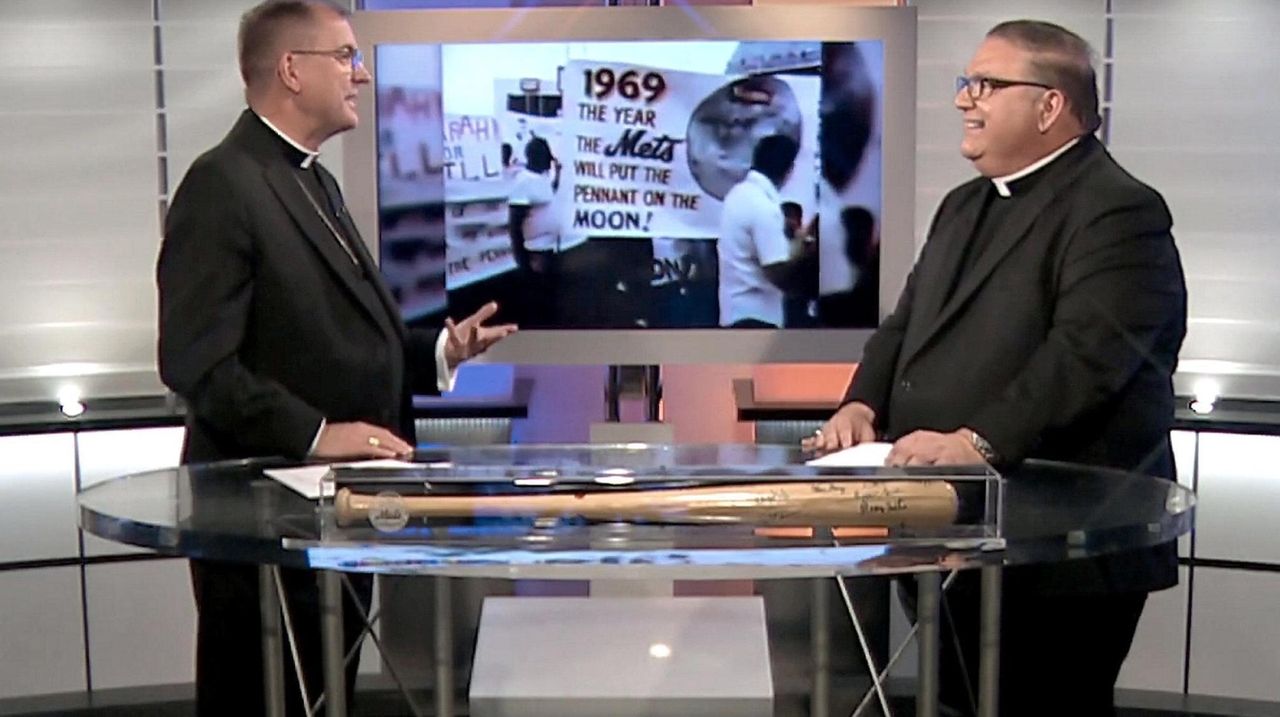 The "Miracle" Mets earned their nickname in 1969 with the can-do attitude they took into every game on their winding march to their first World Series title.

Now, for the 50th anniversary of that stunning season, a longtime Mets fan — Bishop John Barres — is using those life lessons from the baseball diamond to minister to his flock of Long Island's nearly 1.6 million Catholics.

In a new online video series, “Celebrating the Miracle: Dramatic Missionary Growth Against the Odds,” Barres shares spiritual and religious take-aways from that scrappy team of yesteryear — never giving up, being united for a purpose, having a sense of family.

After all, the bishop says in one of the two-minute blogs, “You gotta believe!”

Barres was in the fourth grade when the Mets won the ’69 championship and, like so many boys in New York, he followed every twist and turn of the drama. And he played ball himself, that summer as a Little Leaguer in his hometown of Larchmont in Westchester County.

“It was a miracle and the incredible team chemistry and momentum around the leadership of Manager Gil Hodges inspired me and my friends,” Barres said in an email interview. "We loved Tom Seaver’s fire, Jerry Koosman’s clutch pitching and Ron Swoboda’s incredible catch.”

His sidekick is Msgr. James Vlaun, who confesses in one episode that he still carries a trading card of Hodges in his daily prayer book. Another time, Vlaun whips out the transistor radio he used to sneak into school to listen to Mets games through an earphone.

Barres and Vlaun use childhood memories and humor to draw the connection between Catholicism and baseball.

On defying the odds: The Mets had been the laughingstock of professional baseball for years, Barres tells his audience. Then, under the leadership of Hodges, who attended Mass every day, the Mets overtake the Chicago Cubs in the newly created National League East, sweep the Atlanta Braves in the playoffs and defeat the Baltimore Orioles in the World Series.

“Just as the 1969 Mets won against all the odds, and against all the expectations, so too the Catholic Church on Long Island can be engaged in inspirational, dramatic missionary growth and in so doing serve as a model for the entire country,” Barres says to Vlaun.

“So, it’s a reminder to us of what could happen even in the life of faith? That’s where it connects, right?” Vlaun replies.

On standing up against racism: Three Mets — Ed Charles, Cleon Jones and Tommy Agee — had come face-to-face with racism when they were growing up in the Deep South, Barres says. They "experienced the Jim Crow laws and kept their dignity in the face of injustice,” the bishop tells the monsignor.

The Catholic Church has important social teachings against racism, says Barres, who notes that he wrote a pastoral letter last year for the 50th anniversary of the assassination of Martin Luther King Jr.

On the importance of family: Barres and Vlaun recall how, when they were growing up, they would head to Mets games after Sunday Mass with their families.

“Inevitably those baseball family experiences are connected to Catholic faith experiences … that provide really the beautiful unity in our families,” Barres tells his audience.

Vlaun recounts how he went to a Mets game after his First Holy Communion and went to a restaurant owned by the Mets' Ed Kranepool and Ron Swoboda for his 16th birthday.

The Mets-linked experiences “kind of dot our lives and help us to celebrate faith along the way,” Vlaun says.

On keeping your eye on the ball: Before Hodges became manager, the Mets played like the Little Leaguers portrayed in the 1976 movie "The Bad News Bears," who threw to the wrong base and stumbled over grounders.

But when Hodges took over, he transformed the team by putting in “an emphasis on execution and discipline…,” Barres says.

Faith requires just as much focus. Just like Hodges demanded single-mindedness on the field, “so too the Holy Spirit really brings us to expand our capacity for prayerful concentration,” the bishop tells viewers.

On the heavy hitters: Like other kids obsessed with the Mets in '69, Barres and Vlaun collected the trading cards of their favorite players. They attached the cards to their bicycles to make noise. And they played flipping cards, a game that has been around forever. Barres compares the Mets' '69 lineup to the church’s Communion of Saints — “the great all-stars of our Catholic faith.”

Barres and Vlaun tape their conversations in the TV studios in Uniondale, operated by the Diocese of Rockville Centre. A dozen episodes have been released since the series launched July 1. The last is scheduled to post Sept. 9.

The two teamed up in 2017 for a series tied to the Long Island Rail Road's so-called "summer of hell" infrastructure renewal project. Last year, they connected religion and spirituality to leisure and vacation.

"This summer we want to tap into the Long Island nostalgia around the 50th anniversary of the Miracle Mets to help people to embrace a “Ya gotta believe” approach to Catholic evangelization." Barres said in the email interview.  Barres noted he feels Tug McGraw’s 1973 rallying cry also applies to the 1969 team.

The series can be found on the diocesan website and Facebook page as well as the website of Catholic Faith Network, the church's cable TV channel.

Every episode starts with a shot of a boy’s bedroom littered with a box of Cracker Jacks and toy dinosaurs here and there. A baseball bat leans against a dresser. Hanging on the wall is a Mets poster — near a cross.

A television is tuned to the moment when left fielder Cleon Jones catches a fly ball for the final out of the World Series. Fans stampede onto the field into a moment of euphoric celebration in of one of the mostly unlikely victories in sports history.

For Barres, the opening sequence captures the optimism that many people find missing from their lives today.

“The memory of their ‘miracle’ reminds us that ‘amazing’ things are still possible in the seemingly diminished world of 2019 in which cynicism, disillusionment, polarization and despair often seem easier to come by than inspiration and hope.”

1:49
Where's my mail? LI postal service slower than before pandemic
John Inzillo, AKA Sonny Hudson, always hit the right note
LI's 7-day positivity rate above 2%, data shows
1:52
Going to the chapel, but first a detour to LI for that marriage license
Abandoned black swans scooped up in Southold
Cops say they believe triple killing in Farmingville was a targeted attack
Didn’t find what you were looking for?