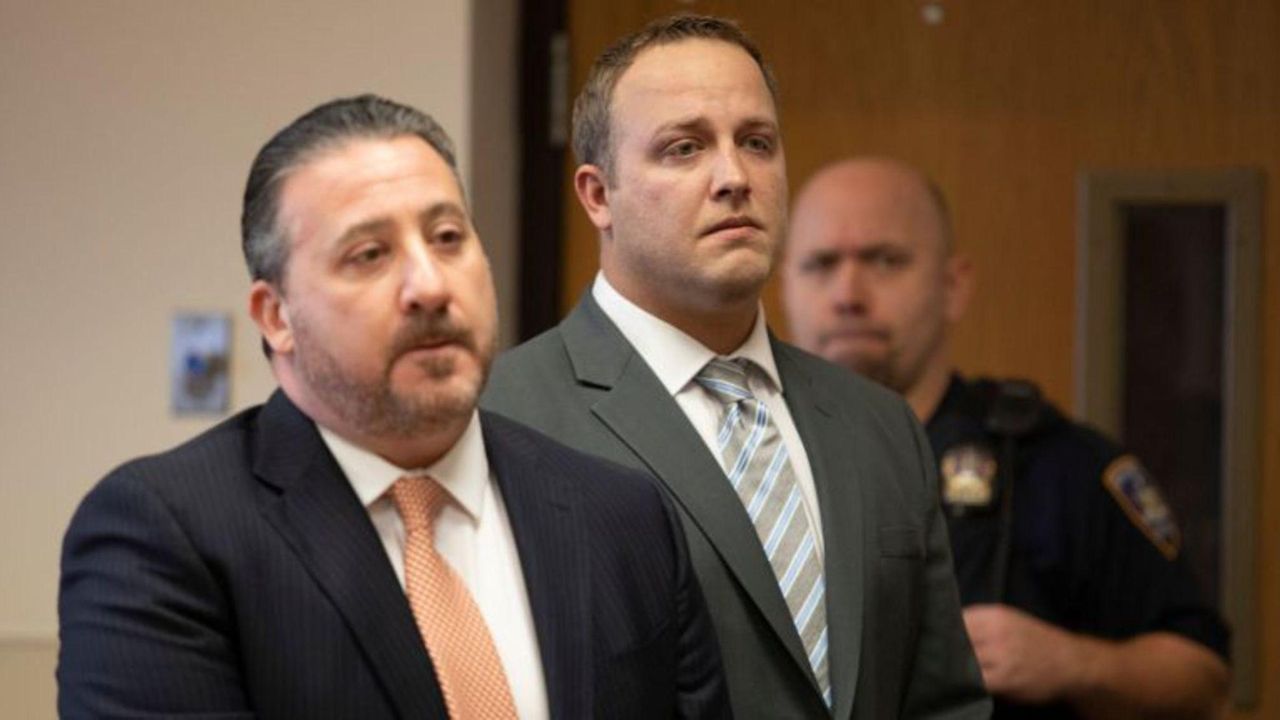 Michael Shear, a Holtsville steamfitter, was sentenced Friday to the maximum of 1⅓ to 4 years in prison for dragging a police officer after a traffic stop and driving while intoxicated. Michael Shear, 35, was charged with second-degree assault for dragging the officer who pulled him over, but a jury acquitted him of those and other charges after a trial in October before Suffolk County Court Judge Stephen Braslow in Riverhead. Credit: News 12 Long Island

A Suffolk judge on Friday sentenced a Holtsville steamfitter who dragged a police officer after a traffic stop to the maximum of 1⅓ to 4 years in prison for driving while intoxicated.

Though a jury in an October trial acquitted Michael Shear, 35,  of second-degree assault for dragging the officer who pulled him over, Suffolk County Court Judge Stephen Braslow in Riverhead Friday criticized Shear for driving away with the officer's arm inside his sport utility vehicle.

The officer, Gregory Sandbichler, then shot Shear after he fled the scene in Patchogue and was chased by several officers. Shear originally faced 7 years in prison.

Shear's attorney, Steven Politi of Central Islip, argued during the trial that Shear abruptly left the traffic stop because Sandbichler had shocked him with a Taser and he was afraid worse would happen if he stayed. Jurors who acquitted Shear of assault said it was unclear what happened between the two men in the moments before Shear drove off.

Politi argued Friday that his client was no risk to society and there was therefore no point in imprisoning him, but the judge disagreed. Braslow told Shear that his behavior on Jan. 15, 2017, and his four previous driving or boating while intoxicated charges, required jail time.

"There has to be some payment for this, and unfortunately for you, that comes due today," Braslow said. The judge denied a request by Politi to delay the sentencing until January.

Earlier, Politi said even the DWI charge is vulnerable to reversal by appellate courts. The jury acquitted him of DWI based on his blood-alcohol reading, finding that evidence not credible. It instead found him guilty, Politi said, because he was recorded on a phone call from the Suffolk County jail admitting he had been drinking. The Court of Appeals is considering a case next month that may prevent prosecutors from using such recordings, Politi said.

Testimony by Sandbichler and other officers wasn't believable, Politi said. "Their evidence was terrible," he said.

But Assistant District Attorney Maggie Bopp said it was Shear's record of alcohol-related crimes that was terrible, noting that he got one DWI while on probation for a previous one.

"Jail is the only way he is hopefully going to learn his lesson before he kills someone," Bopp said.

District Attorney Timothy Sini agreed. He said in a statement: “The defendant is a dangerous, recidivist drunk driver who clearly has no respect for the law or for the lives of law enforcement officers. ...[Prosecutors Bopp and Carl Borelli] ultimately delivered justice for the officer injured by the defendant and ensured that Shear will not pose a threat to motorists in Suffolk County for a long time.”

"The fact that he was called 'a lunatic,' called 'nuts' for doing his job is disrespectful," Bopp said.

Sandbichler and about two dozen other officers listened in court but did not comment afterward.

Politi afterward again insisted that Sandbichler's behavior and varying versions of events show he was not qualified to be an officer.

"Officer Sandbichler is a lunatic," Politi said. "He is unhinged. He needs to be removed [from the police force]. He's a danger."

Sandbichler is more likely to kill someone in the future than his client is, Politi said.

"My client's never shot someone for no reason," Politi said.

Sandbichler testified during the trial that he shot Shear because he thought Shear was pointing a weapon at him.