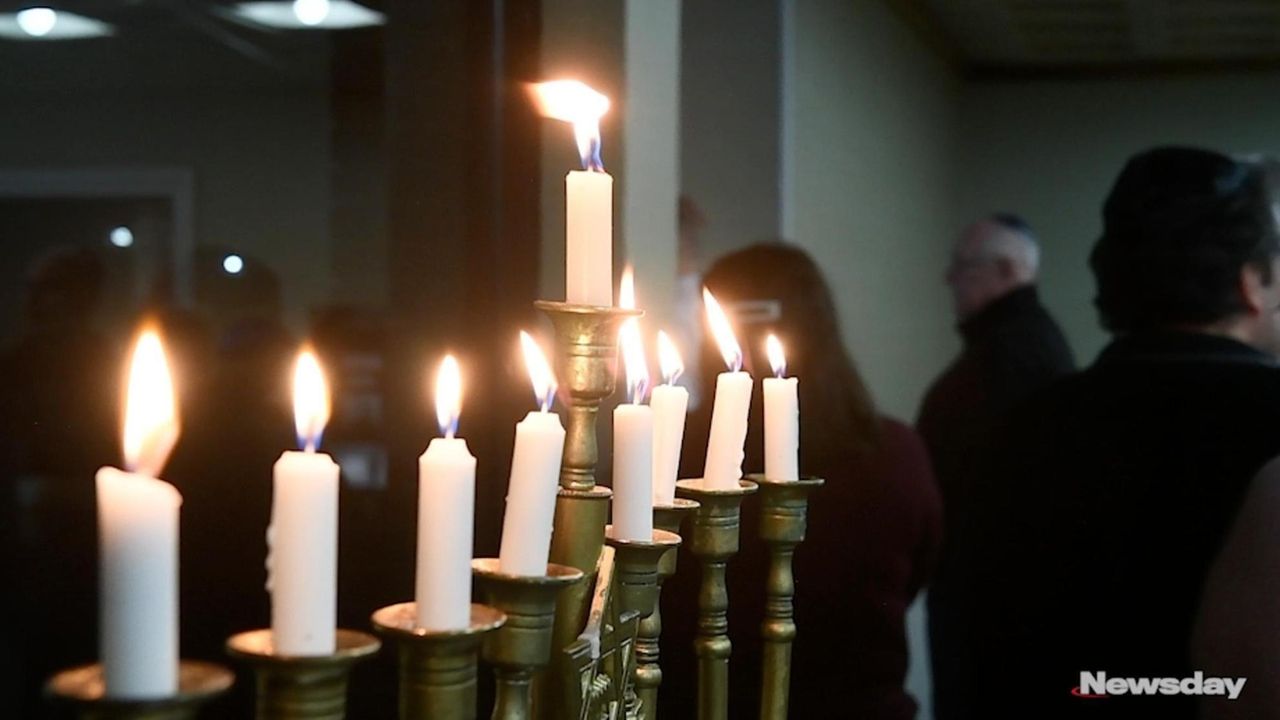 Rabbi Aaron Benson of the North Shore Jewish Center in Port Jefferson Station held a service and spoke about the assault by a knife-wielding man at a rabbi's house in upstate Rockland County. Credit: Newsday / Thomas Ferrara

This story was reported by Vera Chinese, Jesse Coburn, Michael O'Keeffe, Lisa L. Colangelo, Joie Tyrrell and David Schwartz. It was written by Schwartz and Colangelo.

Fear and defiance rang throughout Long Island's Jewish community Sunday in the face of a violent attack at a rabbi's home during a Hanukkah celebration in Rockland County, even as local police ramped up security around synagogues and congregants remained on alert.

"We are lighting a candle," said Rabbi Aaron Benson, of the North Shore Jewish Center in Port Jefferson Station, during a menorah lighting and prayer service on Sunday night in solidarity with the victims. "We are lighting up the darkness which is what we most certainly need at this time given the terrible attacks in Monsey and the other incidents of anti-Semitic attacks happening around Hanukkah.”

Five people were injured when a knife-wielding man, identified by police Sunday as Grafton E. Thomas, 37, stormed into the home of a rabbi in an Orthodox Jewish community in the town of Monsey. One person was very seriously wounded, officials said, and remained in critical condition.

Thomas was in custody Sunday at Ramapo police headquarters and faces five counts of attempted murder and one count of burglary, officials said.

Gov. Andrew M. Cuomo, who called the attack an "act of domestic terrorism," issued a joint statement from more than 130 faith leaders across the state on Sunday condemning anti-Semitism.

"Anti-Semitism, bigotry and hate of any kind are repugnant to our values and will not be tolerated in our state. We condemn this attack and all attacks against members of the Jewish community in New York — an attack against one of us is an attack against all of us," he said.

At the ceremony in Port Jefferson Station, members of the synagogue and guests gathered for the lighting of the eighth candle on the menorah, singing the hymn "Rock of Ages" in Hebrew and English.

“I’ll match their hate with love any day, “ said 58-year-old George Roberts, who came with his wife, Sheryl Roberts, 65, and their daughter, Julia, after seeing a notice on social media.

Roselyn Turnofsky, 67, of South Setauket, said she felt the need to come together and show support.

"It's really sad to see what's going on right now," she said.

Benson urged people to mark Monday as a day of Jewish Pride, encouraging them to wear outward signs of their Jewish identity with courage and without fear to demonstrate attacks on the community makes it stronger and more united.

The Rev. Margaret Allen of the Unitarian Universalist Fellowship at Stony Brook said she learned about the gathering from a message Benson sent to his fellow members of the Three Village Interfaith Clergy Association.

But some also said the rise in anti-Semitic incidents had left then unnerved.

“If I could, I would get on a plane and move to Israel right now," said Nan Monczyk, 66, of Far Rockaway, who works at the Judaica Plus store in Cedarhurst.

In a statement Sunday morning, Nassau County Executive Laura Curran and Police Commissioner Patrick Ryder offered condolences to the victims and said there were no reported threats made against members of Nassau County's Jewish community after the attacks. They added that stepped up patrols will continue "in areas of concern."

Suffolk County Executive Steve Bellone tweeted Sunday that police officers in the county will be patrolling near synagogues and Jewish community centers "out of an abundance of caution."

At least eight separate attacks in New York City last week involved suspected anti-Semitism, including a 40-year-old man who punched a Brooklyn man in Jewish garb on Christmas morning. Hate crimes in New York City are up, mostly driven by anti-Semitic incidents, according to the NYPD.

Steven Moss, rabbi emeritus of B'nai Israel Reform Temple in Oakdale and member of the Suffolk County Commission on Human Rights, said the recent attacks are a "a turning point" after years of escalating anti-Semitic incidents. He said there should be no leniency in the prosecution of the crimes.

"A clear message needs to be sent out [that] this will not be tolerated," he said. "I think that there’s a moral and ethical short circuit in minds and hearts of these people who commit these crimes."

Rabbi Matthew Abelson of Jericho Jewish Center decried the “anti-Semitic climate” of the world and worried there could be more attacks.

“As often happens historically, the verbal assaults have now crossed the threshold into violence,” he said. “We need our allies and friends to step up and fight against this hatred.”

The Jericho synagogue has heightened security in various ways in the past several years, including hiring armed guards, and has received a grant that will help it “harden” its exterior, said congregant and director of security Ivan Fried. Hardening could include installing shatterproof glass or barriers to prevent vehicles from driving near the building, he said.

“You’ve got to secure yourself, take proper precautions and be diligent,” Fried said.

Temple Israel of Great Neck has spent “enormous money and manpower” on increased security as concerns over anti-Semitic attacks have increased over the past four years, said Burton Weston, president of the congregation.

The congregation has hardened the entrances at facilities, added technologies and holds drills to train congregants on what to do if there’s an attack, he said.